Not everyone in Allentown liked Joe Hart. Some found the former publicist for Buffalo Bill’s Wild West Show and local boaster’s personality a little too strong. According to a local newspaper story, an Allentown man in the 1920s, trying to persuade his elderly mother to buy a radio, told her that with one she would be able to hear Hart’s patriotic talks. “Him?” she is said to have shouted in reply, “Why would I possibly want to listen to him!” The lady may have been in the minority. For the most part Hart was widely popular, and, if you didn’t care for his personality, you might just find his broadcasts of interest. Although most were about the Allentown Flag Day Association, which Hart had helped found, others were about some of the colorful characters he had known. And one name that comes up frequently in local newspaper articles about Hart is that of Sir Thomas Lipton, multi-millionaire tea planter and yachtsman. 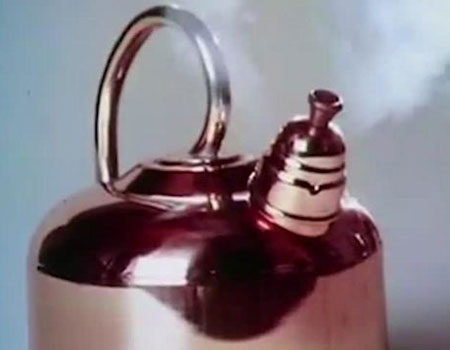 One local woman Althea Heinly- later, a famous Broadway musical actress of the 1920s who married into British nobility- thanked Hart in a letter for introducing her to Lipton at a New York party in 1929. In 1930 Hart visited Lipton aboard his yacht the Erin when it was docked at Newport, Rhode Island and had a picture taken of himself there that is now in the archives of the Lehigh County Historical Society. There is no record that Lipton ever paid a visit to Hart’s modest North Jefferson Street home in Allentown. And no mayor ever gifted him with a key to the city. But Hart was never shy about letting people know about his friendship with Lipton. It was little wonder that local folks of the day felt a kinship with man. His Morning Call editorial obituary hailed Lipton as both a pioneering businessman, sailor and philanthropist.

Lipton’s goateed facial hair, crushed captain’s cap at a rakish angle and jolly manner were familiar to newspaper readers around the world. And, even though his many attempts to wrest the America’s Cup sail racing trophy from the U.S. to Britain ended in failure, it was done with such panache that he was respected for it.

How Hart met Lipton is unclear. It may have been when he was touring the world in the 1890s with Buffalo Bill. Whatever the reason, both men had at least one thing in common: they were salesmen of the first order. It was Lipton who later gave credit to the five years he spent in America in the 1860s for his rise from lower middle-class Glasgow, Scotland schoolboy to the position of one of the world’s wealthiest men.

Lipton’s parents ran a small Glasgow grocery. Thomas was the youngest of their children and the only one that survived into adulthood. He was particularly close to his mother and worked with his parents in their store. One business lesson Lipton learned from his father and never forgot was to deal directly with the producer of a commodity, whether it was vegetables or tea, and cut out the middleman.

By his own admission Lipton was not very good student in school and longed to see the world. At 17 he got a position on a ship that traveled to exotic parts of the globe. As he listened to the other members of the crew talk, he was attracted to their tales of America. It sounded to Lipton as a place where he could make a better life for himself. In 1865 Lipton left his ship when it docked in the U.S. He was to spend 5 years here. At that time America was recovering from the wounds of the Civil War. With expanding railroads and burgeoning cities, the country was thriving.

Lipton’s doings in America at that time are the subject of some dispute among the sources written about his life. What is clear is that he worked for a number of employers and learned American business methods. In particular, Lipton learned the importance of advertising. He also learned bookkeeping. In 1869 he returned to Glasgow in triumph. Using what he had learned in America, Lipton was able to revive his parents’ business. But by now Lipton’s ambitions were beyond the Glasgow shop, however successful he could make it.

It was in the 1880s that he had the idea of tea for the masses. Although the British public had been drinking tea at least since the 18th century, it was a largely controlled for years by the East India Tea Company, a private firm in which the government held a major interest. It was designed to keep the price artificially high. As a result, tea was considered an elite drink outside the pocketbook of the English working class.

At that time most tea came from China. But there were tea planters in the island of Ceylon in British India- now the independent nation of Sri Lanka. Sailing to Ceylon, he contacted the tea planter John Taylor. By getting tea directly from Taylor and other relatively small planters, and through intensive advertising, he was able to create a market for tea that had not existed before. Unfortunately for Taylor and the other small tea planters, Lipton decided that the only way for him to control the operation was to buy them out.

In 1890 Lipton decided it was time to take on the American market. Ever since they had thrown British tea in Boston harbor, Americans had come to think of coffee, preferably black and scalding, as the national drink. But Lipton had learned marketing in America and understood how it worked. By the 1920s he had been so successful that when Americans thought of tea they thought of Lipton’s smiling, bearded face.

By the 1900s Lipton had enough money to take up the gentlemanly sport of yachting. But like everything he did Lipton, was not content with merely sailing around the sea with his friends, among them Britain’s King Edward VII, who knighted him in 1902 as Sir Thomas. On a number of yachts, he had over the years named Shamrock and Erin (after his northern Irish roots), he took on the ultimate challenge, winning the America’s Cup from the grip of the USA. Soon the movie newsreels were full of film of the Shamrock sailing about the seas, Lipton and jaunty cap in command.

Although he never made his goal, Lipton did some other things that many would regard as more heroic. In the middle of World War I he sailed his yacht to deliver medicines to Serbia, which was suffering an epidemic and under siege from Austria-Hungry. With the war’s end Lipton was known as a philanthropist, giving to many charities in Scotland.

It was only after his death in 1931 that the details of Lipton’s personal life became known. Often touted in the press as the world’s most eligible bachelor, he would tell reporters was that he would never marry because he could never find a woman to equal to his mother. To Victorian ears this made perfect sense. In fact, Lipton was a gay man and had a partner he lived with for thirty years. It is not known if Joe Hart attended his funeral in Scotland. He died a year later in Allentown.