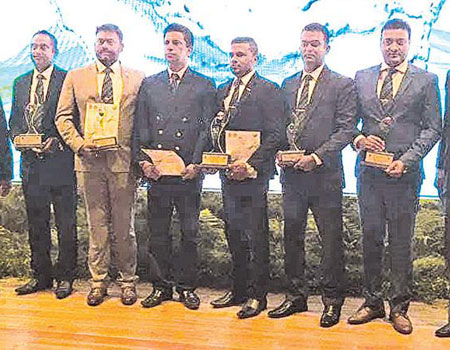 Hayleys subsidiary, Talawakelle Tea Estates PLC (TTEL) won five awards at the Presidential Environmental Awards 2018 in recognition of the company’s approach to environmental management and conservation. Five of the company’s estates were presented with five awards with TTEL’s Bearwell Estate receiving a Silver award while Radella and Somerset Estates each one a Bronze Award and Mattakelle and Dessford Estates were presented with merit awards. TTEL was the only Regional Plantation Company represented in this year’s awards.

Hayleys Plantations Managing Director, Roshan Rajadurai said, “Talawakelle Tea Estates has served as one of the country’s leading examples of environmentally responsible management within the plantation sector. Taking the lead of our parent, the Hayleys Group, TTEL works to deliver economic benefits that also generate social and environmental benefit.”

TTEL Director/ Chief Executive Officer D.S. Seneviratne said, “Over the years, Talawakelle Tea Estates has been unconditional in our efforts to enforce the most progressive approaches to responsible environmental management. These include conservation and enhancement of biodiversity and water resources, resource optimisation and waste minimisation, and the implementation of responsible agricultural and field practices.

“Our performance at this year’s awards is testament to the efforts of the team of employees at TTEL whose efforts are aligned towards a common goal of producing ethical and environmentally sustainable Pure Ceylon Tea of the highest quality,” he said.