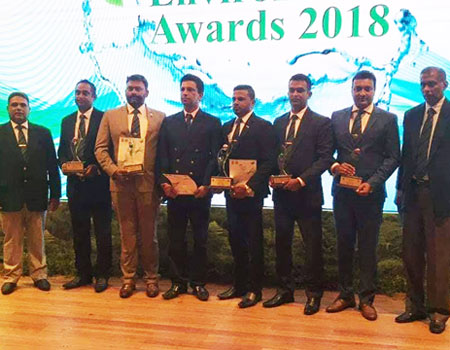 “Talawakelle Tea Estates has a long served as one the country’s leading examples of environmentally responsible management within the plantation sector. Taking the lead of our parent, the Hayleys Group, TTEL works to deliver economic benefits that also generate tangible social and environmental benefit. Our strong performance at the Presidential Environmental Awards 2018 help to underscore these important efforts,” Hayleys Plantations Managing Director, Roshan Rajadurai said.

Organised by the Central Environmental Authority (CEA) under the guidance of the Ministry of Mahaweli Development and Environment and under the patronage of President Maithripala Sirisena, the awards were first commenced by the CEA as the Green Awards in 2011 and later converted into the Presidential Environmental Awards in 2015 with a view to providing a national platform for the recognition of individuals, businesses and institutions which have rendered a great service towards the protection of the environment.

“Over the years, Talawakelle Tea Estates has been unconditional in our efforts to enforce the most progressive approaches to responsible environmental management. These include conservation and enhancement of biodiversity and water resources, resource optimisation and waste minimization, and the implementation of responsible agricultural and field practices.

“Our performance at this year’s awards is a testament to the efforts of the entire team of employees at TTEL whose entire efforts are aligned towards a common goal of producing ethical and environmentally sustainable Pure Ceylon Tea of the highest quality,” TTEL Director/ Chief Executive Officer D.S. Seneviratne said.

“Guided by the principles of the Hayleys Group of companies and the visionary leadership of Hayleys Plantations, Talawakele Tea Estates has continuously set new benchmarks in environmentally and socially sustainable tea production. The instilling of this culture of sustainability at every level of the organization has been central to our continuing success and I wish to express our heartfelt gratitude to our team of employees for the commitment they have shown in executing our vision. Moving forward, we aim to further refine our operations and conservation efforts in order to truly set the standard for ethically produced tea, not just in Sri Lanka, but across the globe,” TTEL General Manager Plantations, Senaka Alawattegama explained.

Among the most notable of TTEL recent efforts to further enhance its sustainability was the recently commenced installation of solar panels at Bearwell Estate, in addition to the initiation of rainwater harvesting across several of its estates as part of an integrated water management strategy formed in collaboration with the International Water Management Institute (IWMI). Similarly, stringent efforts are also being channeled towards progressive soil management practices, biodiversity conservation programmes and one million tree-planting campaigns in order to not only mitigate the environmental footprint of the company, but also actively contribute towards the enhancement of Sri Lanka’s natural biodiversity.