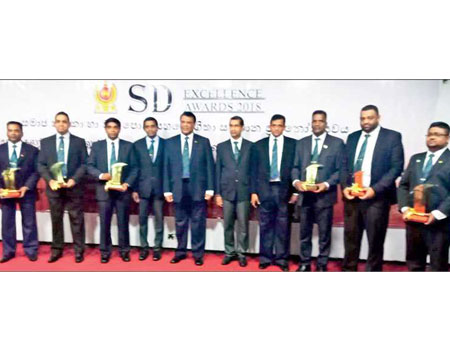 Hayleys Plantations recorded another highly successful performance at the recently concluded Social Dialogue and Workplace Cooperation Awards, organised by the Department of Labour at the Sri Lanka Foundation Institute, walking away with the highest number of awards for the evening.

KVPL’s Kalupahana estate in the low country region took home the gold award in the Small-Scale category, where Edarapola, a fellow low-country estate, was presented with a merit award.

The plantation company’s other gold award-winner was the Ingestre estate housed in the Hatton region which took home the title in the Large-Scale category. KVPL’s Uda Radella estate fell just short of replicating this triumph, earning a silver award in the Medium-Scale category.

Meanwhile, its other counterparts in the Hatton region, Fordyce and Battalgalla, each claimed a bronze award in the Medium-Scale and Small-Scale category respectively. Furthermore, KVPL’s Human Development Division in Dickoya was rewarded with a bronze award for two of its team-building videos.

The ceremony was similarly fruitful for Hayleys Plantations’ other prime subsidiary, Tallawakelle Tea Estate Plc, which bagged a silver, bronze and merit award. Its Somerset and Dessford estates in the Nanu Oya region were presented with silver and bronze awards respectively while its Mattakelle Estate in the Talawakelle region was bestowed with a merit award.

“It is a great honour to have our efforts recognised at such an esteemed event which attracts and assesses so many of our distinguished peers from within the industry. Despite the challenges confronting the plantation industry, awards such as these help highlight the progressive approach being adopted by Hayleys Plantations,” said Hayleys Plantations Managing Director Roshan Rajadurai.

Hayleys Plantations’ success at the Social Dialogue and Workplace Cooperation Awards is the latest in a series of triumphs by the organisation, with TTEL emerging Overall Winners at the National Business Excellence Awards in addition to pairing with KVPL to claim a combined six golds and five silvers at the event. Furthermore, TTEL and KVPL also annexed gold and silver awards respectively at the CA Annual Report Awards. TTEL also clinched five awards at the Presidential Environmental Awards 2018 for the fifth consecutive year, making it the only plantation company to have successfully gone up against local industrial competitors.