Green tea has been considered a health-promoting beverage long before matcha lattes made their way onto every hipster cafe menu. Discovered around 3000 B.C. in China, this ancient brew was later brought to Japan, where a Zen priest published a book titled Kitcha-Yojoki ("Tea and Health Promotion") in 1211. Talk about trendy before his time. 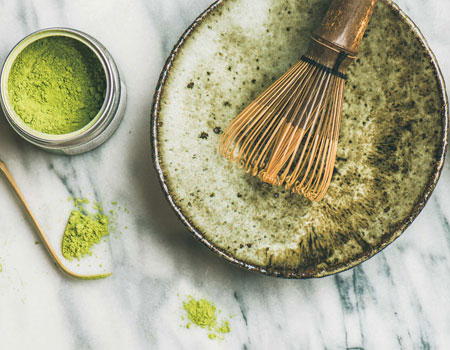 Today, green tea is still beloved. The only difference is that we actually have some good scientific data to support its numerous health benefits—from aiding in weight loss to countering oxidative stress and even helping prevent a range of chronic diseases.

Some of green tea's most impressive benefits, however, are attributed to supplements containing green tea extract, which deliver a higher concentration of health-promoting polyphenol compounds, including epigallocatechin gallate (EGCG). But not all green tea extracts are created equal. Increasingly, research suggests that a form of green tea extract known as green tea phytosome may be superior.

What is green tea phytosome?

Unlike other green tea extracts, green tea phytosome consists of green tea polyphenols that are bound to a phospholipid (i.e., a lipid, or fat, containing a phosphate group). This is thought to improve the absorption of polyphenol compounds such as EGCG into your body by making it easier for them to pass through cell membranes. Green tea phytosome is also caffeine-free, so you don't have to worry about turning into a jittery mess if you take it.

But why not just drink green tea? According to Robert Rountree, M.D., an integrative medicine physician and expert in all things supplements, "The many health benefits of drinking green tea are well-known; however a person has to consume 8 to 10 cups daily to get the full benefit. By greatly enhancing absorption of the active ingredients, green tea phytosome allows you to get the same benefits from a much-reduced dosage."

Intrigued? Here's a comprehensive rundown of green tea phytosome benefits, potential risks, and who may want to consider taking it.

Many of green tea's (and its supplements') benefits can be attributed to its polyphenol compounds, including catechins, which function as antioxidants to help tame free radicals, prevent cell damage, and reduce inflammation throughout the body. One of the main catechins found in green tea, EGCG, seems to be the key behind many of its healing properties.

No pill is going to be (or should be) a weight-loss magic bullet. However, research suggests that, when combined with a reduced-calorie diet, green tea phytosome may help you lose more weight than cutting calories alone. In a study of 50 obese men and women, those who restricted calories and took green tea phytosome for 90 days lost an average of 30 pounds, while those who restricted calories alone lost an average of 11 pounds. Additional studies have resulted in similar findings.

Some experts have speculated that green tea's weight loss benefits are largely due to its caffeine content. But because green tea phytosome is caffeine-free, these studies confirm that polyphenols alone may play an important role in controlling weight, likely by increasing fat oxidation (i.e., the burning of fat for fuel).

Even more promising: Due to the improved bioavailability of green tea phytosome supplements (compared to traditional, non-phytosome green tea supplements), researchers believe that people can experience weight loss while taking a lower dose.

Ask anyone who's struggled with their weight and they'll likely tell you that the hard part isn't necessarily taking it off, it's keeping it off. That's because after you lose weight, you then need disproportionately fewer calories to maintain your current weight due to a reduction in energy expenditure (i.e., a reduction in the number of calories your body needs to perform basic functions). The good news: Research shows that even if you don't use green tea phytosome to lose weight, it may still help you maintain weight loss by increasing energy expenditure.

In one study, women underwent a three-month lifestyle intervention in which they all lost weight. Afterward, they were divided into two groups, one of which received a supplement containing 150 milligrams of green tea phytosome for three months, while the other group received a placebo for three months. After two months, women receiving the placebo began to regain weight, while women taking the green tea supplement continued to lose weight and fat mass for about a month, then maintained their weight for the second and third months.

Metabolic syndrome is no joke. Characterized by obesity and a range of other factors—such as high blood pressure and high blood sugar—this condition increases your risk for heart disease, stroke, and diabetes. But research suggests that taking green tea phytosome may help.

In one study, patients with borderline metabolic syndrome who took green tea phytosome for three months not only lost weight, but they experienced a drop in blood pressure, fasting blood glucose, and triglycerides and experiences an increase in good HDL cholesterol. These positive changes were enough to nudge 68 percent of the patients out of the metabolic syndrome profile altogether. Many of these benefits could be a result of the weight loss; however, the researchers say it's possible that green tea's polyphenols also act directly on the body to yield these results, thanks to their antioxidant and anti-inflammatory properties.

No studies have been done on the anti-cancer effect of green tea phytosome specifically; however, these supplements do contain polyphenol compounds, which are what scientists believe contribute to green tea's anti-cancer activity. Lab studies of the catechin polyphenol EGCG show that it may cause tumor cell death by interfering with replication of cells and slowing the formation of blood vessels around tumors. Another green tea catechin epigallocatechin (ECG) has been shown to stop leukemia cells from multiplying in the lab. However, more research is needed to understand whether green tea (and its supplements) can actually prevent cancer.

Green tea has potent antioxidant properties. In fact, one study found that people who consumed green tea or took a green tea extract supplement for two months had significantly higher blood levels of a number of antioxidants, including glutathione, which our bodies tend to produce far less of as we age.

Glutathione has been called "your body's most powerful antioxidant and detoxifying agent" by mbg Collective member Dr. Frank Lipman, M.D. It's concentrated in the liver and helps bind toxins and escort them out of the body via urine or bile. Glutathione has also been shown to protect DNA from damage, reduce inflammation, improve energy, and keep mitochondria pumping out energy effectively.

Green tea is considered safe when consumed in moderate amounts. However, green tea supplements, including green tea phytosome, may carry some risk. According to the National Institutes of Health, liver problems have been reported in a small number of people who took concentrated green tea extracts. It's not conclusive that the green tea supplements caused these liver problems, but experts recommend that concentrated green tea extracts be taken with food to reduce the risk of health issues and that you discontinue use and consult a doctor if you develop symptoms such as abdominal pain, dark urine, or jaundice. Green tea has also been shown to reduce effectiveness of the drug nadolol, a beta blocker used for high blood pressure and heart problems.

What to look for in a green tea phytosome supplement.

Nearly all clinical studies on green tea phytosome have been done with supplements that contain GreenSelect Phytosome, a highly standardized extract of green tea (Camellia sinensis) containing 60 percent polyphenols and 40 percent EGCG. A number of brands offer supplements containing this extract, and it's a good idea to seek one out that's third-party tested to verify that it contains what it says it does—and nothing else. And, as always, ask your health care provider about potential interactions with your current medications before starting a new supplement.

The benefits of green tea phytosome are promising. That said, there's still not quite enough evidence to prove that supplements will adequately treat all of the conditions mentioned in this article. The strongest evidence exists for weight loss, but even then, weight loss was only achieved among people who also reduced calories or made other healthy lifestyle changes. So it's wise to consider green tea phytosome a potentially beneficial addition to an already healthy lifestyle, and to acknowledge that it can't work its magic in isolation.