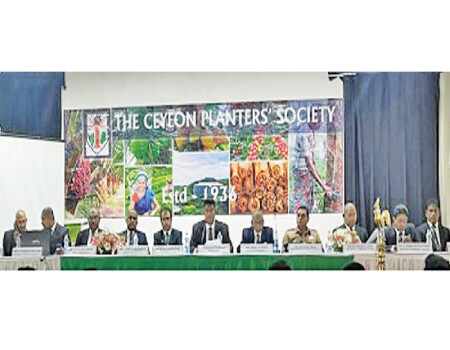 The government must assist the tea plantation sector to minimise their soaring overheads which were caused by several issues beyond their control.

“If not, the production cost of tea will go up by around 30%,” said President, Ceylon Planters Society, (CPS) Dayal C Kumarage at their 86th annual general meeting held after a lapse of over five decades at Radella Planters Club.

Due to the Government’s failure to supply fuel to plantations together with continued power disruptions without prior notice it has hampered the daily operation, production and transportation activities of the plantations.

“Due to the lack of fuel, all green leaf operations have been severely impacted and there was insufficient fuel to operate stand by generators.”

Although the government took a decision to restrict imports in May last year, even after one year, the RPCs (Regional Plantation Companies) and the Small Holders faced severe challenges in obtaining sufficient inorganic fertilizers and agrochemicals.

He said that due to agricultural inputs such as weedicides, fertilizer, fungicides and pesticides not available for nearly one year the cost of production of a kilo of tea which rose to Rs.750 -Rs. 850 has now increased to around Rs. 1,000 to Rs. 1,300.

“If the fertilizer issue is not resolved immediately, it will place the entire tea manufacture at risk. Without applying the required fertilizer replacements, we cannot make the tea that was produced and if the buyers start losing confidence and move to other competing markets, getting them back will be extremely challenging,” he cautioned.

The export volume of the first four months of 2022 is 82 million/ Kgs which is approximately 5% lower than the same period last year. He also said that there is an urgent need of controlling the violence in plantations especially in upcountry areas.

Commenting on the rubber plantations, he said the Rubber Research Institute took a long time to identify the ‘circular (leaf spot disease’ which caused a major loss. This is a major issue as no one could rule out a probability of reaching the levels of economic threshold without real time data on factorial effect.

The delay could be due to the acute shortage of relevant scientists and also not having a Director to TRI. There are about 25% vacancies existing at the movement and solutions to them should be found soon, he said. “If the authorities concerned do not take meaningful solutions immediately the estates will no longer be able to continue operations as usual.”

On a positive note he said that rubber prices are reaching all time high levels and more than 20,000 hectares that have been abandoned previously due to poor prices have been harvested since last season. (SS)