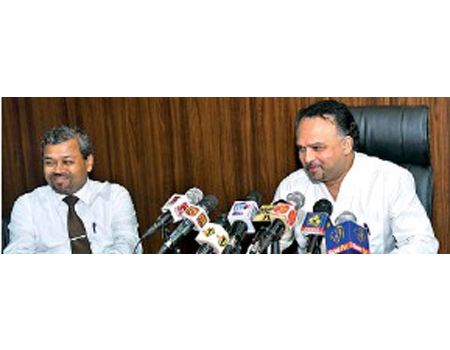 President Maithripala Sirisena and Prime Minister Ranil Wickremesinghe yesterday agreed to lift the nearly three-year ban on weedicide, glyphosate, though under strict conditions, to avoid a potential embargo on Lankan tea exports to Japan and other major export markets.

Plantation Industries Minister Navin Dissanayake yesterday told reporters that if the glyphosate ban is not lifted, Japanese government is likely to ban Sri Lankan tea exports, which may lead to several other countries to do the same. MORE ON

Dissanayake is to present a Cabinet paper at the next week's Cabinet meeting to officially lift the glyphosate ban on tea and rubber industries as well as to set up a mechanism to import the weedicide.

Dissanayake said he was preparing to present a joint Cabinet paper with former Agriculture Minister Duminda Dissanayake to lift the glyphosate ban for the whole agriculture sector.

However, he said President Sirisena and Prime Minister Wickremesinghe have decided to lift the ban only on glyphosate for tea and rubber industries immediately.

Mirror Business yesterday exclusively reported that Sri Lanka was risking losing the Japanese market for its tea due to exceeding default residue levels imposed by the Japanese authorities on MCPA, a widely used substitute to glyphosate by planters.

During the last four months, Japan has rejected almost all the tea shipments from Sri Lanka, costing the country approximately Rs.1 billion in foreign exchange.

He noted that the removal of ban on glyphosate is coming in at the right time with the rainy season beginning in May as planters need to use weedicides extensively in this period to control weeds.

President Sirisena imposed an immediate ban on Glyphosate in June, 2015 through a gazette notification under the Import and Export (Control) Act, No.01 of 1969 without introducing an alternative weedicide or allowing a transition period for the industry to move into a suitable alternative.

This led to the tea planters using unauthorised and unrecognised chemical substances from the black market at higher prices. Glyphosate was the most popular and the widely used weedicide in tea plantations in the island nation prior to the ban.

According to Dissanayake, the ban has caused heavy economic loss to the plantation industry and to the overall economy.

Since the ban was imposed, Sri Lankan tea industry's annual yield slumped 33.2 million kilos on average per annum as plantations had to employ manual labour at higher costs and to less effective weedicides to control the weeds while Sri Lanka lost Rs.26.7 billion in export earnings per year.

Speaking to Mirror Business, Former Chairman of Sri Lanka Tea Board (SLTB) and an open critic of the ban Dr. Rohan Pethiyagoda said the consequences of the glyphosate ban have been disastrous for Ceylon tea, draining possibly as much as Rs.50 billion from the economy.

"Tea estates today are covered in weeds. Illegal weedicides applied by desperate landowners have caused chaos. It will take years to recover lost markets and our damaged reputation. As for lifting the ban after bringing Ceylon tea to its knees, well better late than never. But the government is going to pay a heavy political price for this folly."

Dissanayake rejected the claims that glyphosate is linked to chronic kidney disease. Referring to the Cabinet-appointed expert committee findings he said the committee didn't find a link between kidney disease and glyphosate.

In the committee's observations, referring to a local study of 601 patients who deliberately drank a concentrated formulation of glyphosate, it was pointed out that there is no record of kidney failure in the 96.8 percent of patients who attempted self-harm with glyphosate.

"The ban on glyphosate had no foundation in science. None of the medical, scientific or agricultural institutions were consulted," Dr. Pethiyagoda pointed out.

Minister Dissanayake also dismissed Prof. Channa Jayasumana's claims, which linked kidney disease to glyphosate. He said it is only a hypothesis which is yet to be proven.

However, Dissanayake said that the government is planning to replace glyphosate with an organic herbicide within next three to four years.

He asserted that the tea and rubber industries should reduce its dependence on glyphosate over next three to four years on par with the European Union (EU) standards. The EU recently extended the time period given to do away with glyphosate by five years.

Meanwhile, elaborating on the mechanism, Dissanayake said a special committee will be formed compromising the Secretary to the Plantation Industries Ministry, Secretary to the Agriculture Ministry and the Director at the Pesticide Secretariat, who will issue quotas to regional plantation companies (RPCS) and tea small holder authority to import glyphosate according to their requirements.

The minister stressed that only requested amounts will be allowed to import and SLTB and Tea Small Holders Authority will strictly monitor the usage of imported glyphosate.