Government bans palm oil industry – But for what reason? 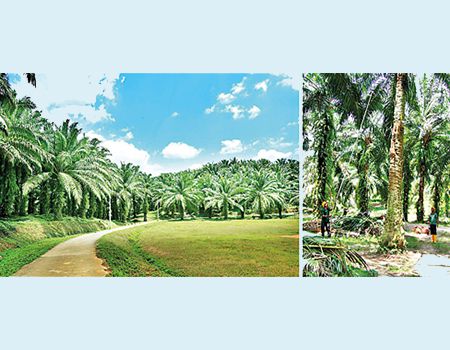 The government recently surprised the nation by announcing a ban on palm oil imports amidst an issue of the carcinogen aflatoxin detected in imported coconut oil. Wonder who the advisors were to this decision? Don’t they know that palm oil is a very versatile raw material used in so many industries manufacturing both edible and non-edible products used by people on a daily basis? The national usage is about 10 kg of palm oil per person per year. This pattern of usage is not specific to our country but it’s global. As expected this decision to ban palm oil imports was reversed to a certain degree but damaging the confidence the people had in the government. The banning of palm oil imports to the country has immediate ramifications whilst the gazette notification to ban the cultivation of palm oil in the country for no real valid reason will hit the economy of the country in the future gradually.

Some perceive palm oil industry as the evil for natural forests and environment of a country. Yes, this was the case in giant palm oil producing countries like Malaysia and Indonesia, but only during the inception of the industry. With both national and international pressure, these countries have now switched to sustainable production of palm oil backed by certifications to validate the process. Otherwise, the produce will not be able to be traded with the major global markets. Malaysia and Indonesia at the inception of the industry had felled natural forests to obtain the necessary land for palm oil cultivation. Obviously when natural forests are felled depletion of natural forests, loss of biodiversity, degradation of soil and depletion of catchment areas of natural water sources would take place. Do our policy makers envisage that the same is taking place in Sri Lanka? If they take a genuine effort to look into this claim made by a few, they will find out that it’s not the case, since land used for palm oil cultivation in Sri Lanka had been under other plantation crops for three or more generations. In other words, lands used for palm oil cultivation in Sri Lanka are not from virgin forests but had been under cultivation for more than a century.

Oils with saturated and unsaturated fatty acids have their advantages and disadvantages when it comes to health aspects and their suitability to manufacture both edible and non-edible products. Saturated fatty acids when consumed are believed to increase bad cholesterol levels in humans. Unsaturated fatty acids are unstable (due to the presence of double bonds) with a possibility of breaking down into carcinogens when used for frying repeatedly. Also, unsaturated fatty acids give rise to trans-fatty acids, again believed to be carcinogenic, when subjected to a chemical process called hydrogenation to make food items like margarines. For some oils, i.e., coconut, soya, canola, sunflower, corn etc the raw material has to be dried during the process of extracting the oil. If correct drying procedure is not followed fungi that could produce the carcinogen aflatoxin can grow on the raw material thereby contaminating the oil. Also, during the deodorization activity of the vegetable oil manufacturing process compounds such as 3 MPCD and GE are formed and they are also believed to be carcinogens. The quantities of such compounds are relatively high in palm oil unless good manufacturing procedures are followed.

Accordingly, whatever the source of vegetable oil is, what is important is following correct manufacturing procedure and how we use it. Anyhow, the government has the responsibility of food safety by ensuring good manufacturing practices are adopted by local manufactures and only quality oils are imported to the country if not self-sufficient in its requirement.

Coconut growers believe that palm oil cultivation is a threat to them. The national production of coconuts is in the region of 3 billon nuts per year. Around 68 per cent of it goes to household use for cooking; 14 per cent for production of packeted coconut milk and cream and powder; 15 per cent for virgin coconut oil and desiccated coconut manufacture. So, what is left for coconut oil production is a mere 3 per cent of the national production. This quantity is sufficient to produce only around 15,000 MT of coconut oil per annum. But as per the statistics the country produces 50,000 MT of coconut oil per annum. Yet, there is a deficit of around 170,000 MT of vegetable oil in the country. To bridge this gap within the country we will need either a further 170,000 hectares of coconut or a mere 43,000 hectares of palm oil cultivation. Oil yield is four times higher in palm oil than in coconut.

The value-added products possible from coconut is numerous, i.e. sweetened coconut, toasted coconut, virgin coconut oil, coconut chips, coconut cream, powder and milk. Therefore, the strategy of the coconut industry should be to move towards these high-end products bringing in more foreign exchange to the country whilst enhancing income levels of industry stakeholders. Palm oil is the cheapest source of vegetable oil in the globe and would satisfy the purchasing power of consumers as well. Therefore, if the two crops cater to the products where they have the competitive advantage the two industries could end up in a win-win situation.

Possible rationale for the ban

Currently, there is criticism levelled against the government that deforestation is taking place but it is being ignored. Also, in the recent past a major environmental issue in the country was expansion of palm oil cultivation. Therefore, issuing of the gazette notification banning palm oil cultivation in the country may be to indicate to the critics that the government is acting on environmental issues. Since the current government coming into power, the lobby of the coconut growers to ban cultivation of palm oil became much stronger. Further, recently a tyre manufacturing company was opened in the Kalutara District and one more is in construction in the Hambantota district. This would mean that the demand for natural rubber is going to increase tremendously in the future but the supply situation could become weak if rubber lands are converted to palm oil cultivation. These concerns too may have prompted the Government to take the present stance with regard to palm oil industry in the country.

However, without resorting to killing of a promising industry capable of contributing to the sustainable development of the country there are other more prudent strategies that the government could adopt to address issues stated above. The raw material supply to both coconut and rubber industries in the country could be easily increased by around 25 per cent in the short term through encouraging the growers to improve the adoption of recommended agricultural practices in the existing cultivations. When it comes to rubber, the country has the potential to double the current production in the long term by expansion of cultivation.

Palm oil is an important and a versatile raw material for a number of industries in the country by manufacturing edible as well as non-edible products used very much in our day-to-day life. The existence of all these palm oil-based industries will be threatened if demand for palm oil is not met since substitution of palm oil is not a viable option always due to the specific features of the raw material, product manufacturing processes being used and cost of manufacture.

Importation of copra is considered to boost coconut oil production in the country. However, special attention is needed regarding the quality of copra that is to be imported. Poor drying methods adopted in producing countries would give rise to chances of carcinogens being present in coconut oil produced from imported copra. Government policy now is to minimise imports to control draining out of foreign exchange. However, by not allowing palm oil cultivation in the country the government is moving away from this policy. This ban to cultivate palm oil deprives the country of an opportunity for development and also paves the way to lose around Rs. 40 billion worth of foreign exchange each year. Palm oil cultivation gives a high return to the investments which will improve the plantation economy of the country whilst enhancing the livelihood of low-income earning plantation workers. The government is looking for investments to prop up the economy of the country. Palm oil industry due to high return on investments has the potential to bring investments. This is clearly evident in fast-developing nations like India, Malaysia, Indonesia and Thailand. The decision makers should learn the ground realities from them to develop and implement policies beneficial to the country.