Home>Publications & Articles>Articles>Media Articles>Ginger Tea is a Blessing for Health: Rejuvenate your body with it’s Amazing Benefits

Ginger Tea is a Blessing for Health: Rejuvenate your body with it’s Amazing Benefits

Tea works like a staple drink for many people, especially, in India. One cup of this boiling aromatic drink can actually unblock the clogged brain; soothe a body and give a refreshed feel. There are different types of teas. Here, we are going to talk about the magic of ginger tea. 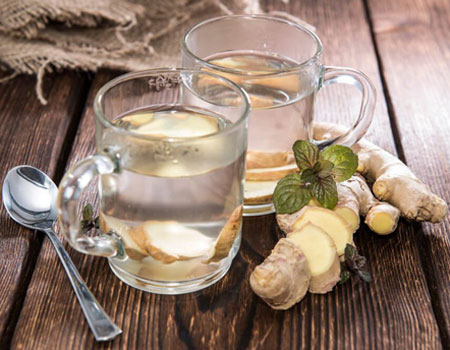 Ginger tea is a refreshing and caffeine-free substitute for black tea or coffee that gives out a warm effect. One can also add peppermint, honey or lemon to it, to make the tea a soothing beverage. Ginger tea is consumed by many people to get relief from problems like a cough, cold, indigestion, nausea, and motion sickness. Ginger has medicinal properties. Ginger root has been found to have anti-inflammatory and antioxidant properties, and is believed to have many other health benefits.

Let’s have a look at the health benefits of Ginger tea:

The tea that is prepared from ginger is Ginger tea in English. It is known as ‘Adrak Chai’ in Hindi; ‘Allam Tea’ in Telugu; and ‘Inji Tea’ in Tamil.

Ginger contains many vitamins and minerals, including Vitamin C and magnesium. Ginger tea helps in giving a soothing effect to the nerves. It helps in preventing vomiting, headaches, and migraines. Migraines, which doesn’t have a medicinal cure (except painkillers) can be controlled simply by drinking ginger tea. No more painkillers for a migraine.

Did you know? Ginger tea is also useful to get rid of a jet lag after a long trip.

This magical drink (ginger tea) also plays a key role in benefiting the user with healthy digestion, which in return improves food absorption and heals stomach pain. This also helps one to keep away from unnecessary belching. This increases the appetite by releasing gastric acids.

Ginger tea has an array of uses. It is also useful for treating swelling of the joints, for instance, rheumatoid arthritis. It helps one to get rid of tiredness, swelling, and puffiness of sore muscles and joints. Also, Ginger tea is advised in case of athlete’s foot to prevent pain, burning sensation, and itching.