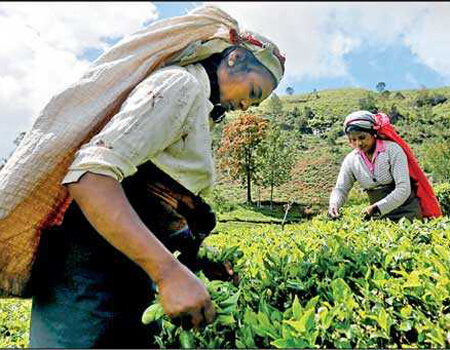 President Gotabaya Rajapaksa has created a fresh storm in a teacup with his directive to hike estate worker wages by 17% to Rs. 1,000 from March whilst a Collective Agreement is in place and with the plantations companies, already in crisis, saying they have no capacity to pay.

The plantation companies and the Employers’ Federation of Ceylon held an emergency meeting yesterday to come to terms with what one industry leader called a “shocker” as the sector was already in crisis.

For example, tea prices at auctions have come down to Rs. 510 per kilo from Rs. 620 a few years ago. The cost of production is higher, and rubber prices too have been very low.

“We simply don’t have the financial capacity to pay when the industry has been making continuous losses,” a spokesperson for the plantation companies said, adding that the rest of the industry, comprising small tea holders and private factories, too, were suffering.

The wage increase was first promised during the Presidential Election campaign by Rajapaksa, to win support from the estate worker community. On Tuesday he said the Government has taken several initiatives such as tax exemption, fertilizer subsidy to increase the quality of this vital sector. President emphasized that these benefits should pass onto the workers.

The industry is surprised that the hike and effective date were announced sans any consultation, as well as while a binding Collective Agreement is in force. “Effecting such a hike will create a bad precedent to rest of the sectors which have Collective Agreements,” another industry expert warned.

They estimate that the Rs. 145 hike will shoot up the wage bill by Rs. 6 billion, excluding gratuity. It was claimed that compared to some of other Wage Boards-determined labour sectors, plantation workers were better paid already.

The industry hopes to explain the crisis situation to the Government on Monday. The EFC is scheduled to officially express its opinion via a statement today.

Plantation Industries and Export Agriculture Minister Dr. Ramesh Pathirana told the Daily FT a meeting is scheduled for next week with Secretary to the President Dr. P.B. Jayasundara, industry stakeholders, and Treasury officials, to work on the cost breakdown and how it could be worked out.

Noting that the basic wage increase is Rs. 145, the Minister said that they were considering whether it can be borne by the Government for a short period, given that the RPCs and workers also improve their productivity.

The Minister was of the view that the RPCs would be in a better position once the savings tax cuts and relief on fertiliser come into effect.

“We have provided them with a financial relief package, which includes reduction in VAT and economic service charge, and a moratorium in relation to loans. Considering all this assistance, RPCs should be able to fall in line, and pass on that benefit to provide the daily wage increase to the estate workers,” he added.

The Minister also pointed out that a majority of the Regional Plantation Companies (RPCs) are profitable, but that is not often reflected on their individual balance sheets, as it is covered by most of the other expenses.

According to the present Collective Agreement between Regional Plantation Companies (RPCs) and trade unions, workers receive a daily wage of Rs. 855, which consisted of a basic daily wage of Rs. 700, Rs. 40+ for each additional kilo of tea leaves plucked, and a daily EPF and ETF transfer of Rs. 105.

In early 2019, the estate workers and several other groups staged several demonstrations, demanding their daily wage to be increased to Rs. 1,000. However, later an agreement was reached to increase the basic daily wage to Rs. 700, following a discussion held between trade unions and estate owners.