THE location is a quaint plantation hamlet in the scenic district of Matale (adjoining Kandy) in the central province of Sri Lanka. The Gammaduwa village consists mainly of Tamils of Indian origin. Like other plantation villages and districts, their history goes back over 150 years when the British brought tea to Sri Lanka. Today all tea plantations in the island are owned by Sri Lankans and while most tea lands are managed well, others have become mini jungles. 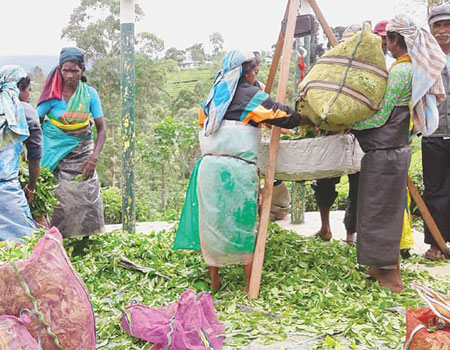 It rained heavily the night before in the Gammaduwa plantation village. Leeches crawl in their multitudes and the tea estate workers of this area and the adjoining plantation village of Shri Puram seem oblivious to the trails of blood on their bare feet. They quicken their speed. Upon their heads are cooking vessels, bags of raw rice, daal and raw vegetables.

They are on their way to an open clearing adjoining a tea estate, where at the foot of a banyan tree, as per a practice spanning over 150 years, offerings are made to a jungle god. Here they will cook the rice, freshly slaughtered chicken (killed as offering to the tree living god) and engage in several rituals. Incense is burnt, holy ash rubbed on foreheads and coconut broken on a rock thought to be sacred. It is a thanksgiving for new work and seeing the people safely through the hazards of clearing shrubs that had overrun the plantation. The ownership of the plantation has changed hands. These men and women have now commenced work under a new owner.

“These lands were once luxurious tea estates. We have earned our sustenance on these villages. Our ancestors have died here. Over the years we have watched these plantations transform from being profit earning to become jungle shrub and sold off as abandoned land. We have been out of work for months. Many of us travel daily to cities looking for work,” says Lakshmi, summarising the entire shifting vagaries of the fate of the Lankan tea industry.

Lakshmi lives with her eight-year-old son and 12-year-old daughter in the crumbling estate living quarters built around 150 years ago. Her husband was jailed over a petty crime and her children look malnourished. She does not want her children to end up working on tea plantations but struggles with educating them. Her new job pays her Rs800 per day, higher than the general rate of around Rs650 a day.

Few plantation workers have managed to buy plots, sometimes as small as 10 perches. Around 70 per cent of the tea plantation industry of Sri Lanka is held by small holders, says Dr I.S.B. Abeysinghe, head of the Tea Research Institute (TRI). The rising cost of labour, high cost of adopting new technologies and short-sighted government policies, such as the ban imposed three years ago on the weed killer (glyphosate) and lifted in May this year, are among the challenges that has cost the tea industry dearly. The other perennial drawback is being stifled by difficult work conditions and meagre pay. Every tea plantation worker wants their child out of the plantation and thus the current average age of a plantation worker is 50 years. The question is who will work on the estates in 20 years time.

Glyphosate was banned primarily based on a campaign by a parliamentarian Buddhist monk in Sri Lanka, Ven Athuraliye Rathana Thero, a supporter of President Maithripala Sirisena, who claims it causes kidney disease. Even though the disease is mainly found in the dry zones and not in the tea plantation areas, Sri Lanka became the first tea growing country to ban glyphosate.

The result was that countries such as Japan objected to the high chemical levels present in the alternative weedicides and threatened to stop purchasing Lankan tea. The glyphosate ban was imposed without scientific research and although the ban is now lifted, the issue is further politicised with Rathana, who has declared that he would join the joint opposition of former president Mahinda Rajapaksa if the glyphosate ban was not re-imposed.

Despite these hurdles, officials of the TRI and the Tea Small Holdings Development Authority (TSHDA) remain confident that the superior quality of Lankan tea and the overall resilience of the tea plantation owners would win.

Since tea was introduced to the island nation by James Taylor in 1867 after the country’s first cash crop experiment, coffee, failed due to a leaf disease, it has been the mainstay of the country's economy. And the story of Lankan tea remains a story of history and continues to evolve.

Its unsung heroes are Sri Lanka's Indian-origin plantation workers. Many of these men and women, transported by ship to the north eastern sea port of Talaimannar between 1830 and 1880, made their way on foot through jungles to British-owned newly-cleared tea planting locations. Many died on the way, falling prey to malaria and other diseases, but those who lived have fostered generations that are sturdy as the roots of tea and they remain entwined to the fate of the industry - a legacy of the British colonial history.