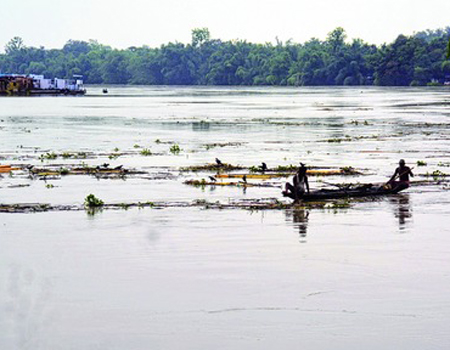 Hailakandi: Incessant rain in the past few days has wreaked havoc in the gardens of Assam's Barak Valley, particularly in Hailakandi district, which is expected to hit tea production.

A rise in the water levels of the valley's rivers and breach in embankments has inundated tea plantations, labour lines, manure storages and factories in several gardens. About 20 gardens, covering nearly 10,000 hectares, and more than 30,000 people have been affected.

In Cachar district, Rampore and Ballacherra tea estates are inundated.

In Karimganj district, Bhubrighat, Hattikhira, Baithakhal and Jalalnagar tea estates are affected. The situation is worse in Patherkandi circle, where the water level is rising rapidly.

The Barak Valley has 101 tea gardens, with nearly 1.45 lakh labourers. The valley's average annual tea production is 50 million kg. The gardens are expected to suffer 10 to15 per cent loss because of the current wave of floods, an official of a garden in Cachar said.

Over 30,000 labourers of the valley's affected gardens do not have enough food or potable water as the authorities have failed to provide them regular ration because of disrupted communication.

An official of a Cachar garden said the government had stopped the ration system for tea labourers after the passage of the food security bill and now the garden authorities purchase ration, including vegetables, from the local market on a weekly basis. Because the entire area is submerged and communication has been cut-off, they cannot purchase or distribute the food or make payment to labourers.

Waterlogging has hampered work in the gardens and thus the daily income of labourers.

Prahlad Ree, president of Lalamukh Bagan panchayat in Hailakandi district, said the labourers' conditions would worsen if the water level rises and communication continues to be disrupted.

The garden authorities are fearing outbreak of diseases after the flood. In many places, the labourers, their families and cattle have been shifted to safer places as the water levels are rising in the gardens.

The secretary of the Barak Valley branch of the Tea Association of India, Sorodindu Bhattacharjee, on Friday appealed to the administrations of the valley's three districts to extend adequate relief and rehabilitation to the marooned labourers.

He said the floods have badly affected the plantations and disrupted communication, especially in Hailakandi. As a result, garden managements have not been able to collect remittance from banks and distribute wages on the scheduled dates.