'Fire up' defend glypho use 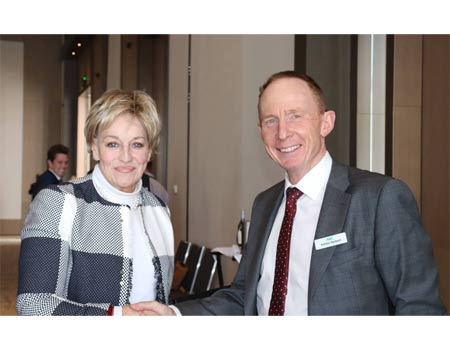 THREAT from ill-informed public perceptions to Western Australia agriculture's continued use of the herbicide glyphosate is not going away "anytime soon", according to Katherine Delbridge from CropLife Australia.

"The longer this issue goes on, the more people in your camp are going to get tired and start to lose enthusiasm for backing science, for backing the right to farm using herbicides," Ms Delbridge told consultants.

"That is why, when you get an opportunity to fire up in the media, to participate in the story and to explain what we do and the reasons why we do it, it is so important you take that opportunity.

"If we are serious about agriculture becoming Australia's next $100 billion industry then crop protection has to be a part of it.

"It is currently responsible for more than $70 million of agricultural output, it is that critical."

It was also critically important everyone involved in agriculture used crop protection products responsibly and effectively because individual actions affect the whole industry when it is "in the spotlight like we are at the moment", Ms Delbridge said.

She used live sheep export as an example of how public opinion could turn against a legitimate industry because "poor practice by one live exporter put the whole industry under threat".

Ms Delbridge acknowledged consumers had a right to choose organically grown foods not produced with chemical herbicides or pesticides and if farmers saw a viable opportunity to tap into the organic market then they should take it.

In both instances that was a personal choice.

"But where consumer sentiment is being changed by lying and fear, that's where we are not OK and we do want the science to win through," she said.

"People outside of agriculture don't understand their food is so relatively cheap, clean and safe because farmers have access to good crop protection products.

"There is no agriculture chemical regulator across the world that has come out and said glyphosate is not safe to use, but that is not the message that some people have heard."

Part of the problem with glyphosate was that it was also the base for herbicides used outside of agriculture and information about those products was often not conveyed to the public, which increased pressure on agriculture to defend its use.

"While these chemicals are used by farmers, they are also being used by environmental land managers and it is at that level that we are seeing a disconnect between people who are living in a very suburban street and what is being sprayed outside their door and no information about that - can my child play on that, can my dog walk on that?" Ms Delbridge pointed out.

"That is where that level of fear comes into it, so that is why we have been providing councils with information."

She said CropLife, a not-for-profit body representing innovators, developers, manufacturers, formulators and registrants of crop protection and ag-biotechnology products, had been working extensively with local councils over the past year.

Some councils had banned glyphosate use on public lands, looking for a "plan B" and on the broad assumption alternatives are safer, she said.

"Yes, innovators are working on alternatives, but it is not because there is something wrong with plan A, research and development is simply looking to improve herbicide performance and its safety profile and how it is being used."

Ms Delbridge pointed out glyphosate has been used for 45 years, being first patented by Monsanto in 1974 and it came off patent in 2000, enabling other companies to use it.

"That is really important, because the claims Monsanto (or its owner Bayer) owned all the data are wrong - data compiled on use of glyphosate and the reviews of it are not owned by one company," she said.

Until 2015 there was no issues with glyphosate in respect of saying it caused cancer, Ms Delbridge said.

In 2015 the International Agency for Research on Cancer (IARC), an arm of the World Health Organisation (WHO), released a report labelling it a class 2A probable carcinogen.

Other arms of the WHO have also investigated glyphosate and "at this stage the WHO says glyphosate is safe to use", she said.

"Risk assessment is a function for regulators, like the Australian Pesticides and Veterinary Medicines Authority (APVMA).

"The APVMA registration process is a constant review process and they've looked at 1260 studies and scientific reviews and they are still saying it (glyphosate) is safe to use.

"It is a thorough review process that looks at how the product is used in the environment.

"They are not the only one, every scientific regulator or technical advisory committee around the world looking at glyphosate and its intended uses have said it is safe to use.

The United States Agricultural Health Study, tracking more than 89,000 farmers and their spouses in Iowa and North Carolina since 1993, was a "very important study" not taken into account when IARC released its report because the study information at that stage was only in draft form, Ms Delbridge said.

The study results published last year "concluded there is no link between glyphosate and cancers, regardless of the exposure rate", she said.

As a class 2A probable carcinogen like the IARC claimed, glyphosate posed the same cancer risk, Ms Delbridge said, as eating red meat, drinking hot beverages such as tea of coffee, frying food such as eggs at high temperature or working with chemicals as a hairdresser.

It posed less cancer risk than drinking alcohol, sawdust, being unprotected in sunlight or eating bacon and processed meats, she said.

Some court cases brought by farmers in the US over glyphosate were being appealed and no money had been paid out, Ms Delbridge said.

In Australia two individual court actions were lodged in Victoria over glyphosate usage and one class action was lodged in the Federal Court, she said.

Germany has decided to phase out glyphosate as part of an insect protection plan and the European Union was due to review glyphosate in 2022.

Vietnam decided in April to ban glyphosate from this year and use of glyphosate-based products next year, but there were no changes to imports at this stage, Ms Delbridge said.

Thailand was the latest country to announce a ban, but there was internal debate whether banning herbicides, including glyphosate and paraquat, was in the best interests of the Thai people, she said.

Sri Lanka imposed a glyphosate ban in 2015 because of an increase in kidney disease in some farmers.

The ban had since been reversed after it did not result in improvement in kidney disease and tea plantation production "took a massive hit", Ms Delbridge said.

"There were strange consequences from the ban, for example, more farmers were being bitten by snakes in tea plantations because they were not able to see them among the weeds.

"They hadn't done any of the work to understand what would happen to their production or to the health and safety of their people before they introduced the ban," she said.

Regional Development, Agriculture and Food Minister Alannah MacTiernan, who formally opened Outlook 2019, said she had asked the national AgMin conference - a meeting of State and Federal agriculture ministers and agriculture departments staff that occurs twice a year - two weeks ago to look at the potential impact of possible bans on agriculture products produced with glyphosate.

"Horticulture and agriculture in Australia are strongly reliant on glyphosate so we need to know what might be the response if more countries start banning it," Ms MacTiernan said.

"We don't want to be caught without options, what might we do to reduce our exposure?" she said.

Ms z said the Federal Agriculture Department would conduct a review and would contact "a range of stakeholders" for their views.

"We don't want to wait, we want to know what are the alternative farming systems available to us should bans be placed on products grown with glyphosate that affect our export markets," Ms MacTiernan said.

ACCC president Ashley Herbert told the conference there was a "enormous disconnect" between farmers and the broader WA population, but in his personal experience people were "very willing to trust farmers and farming".