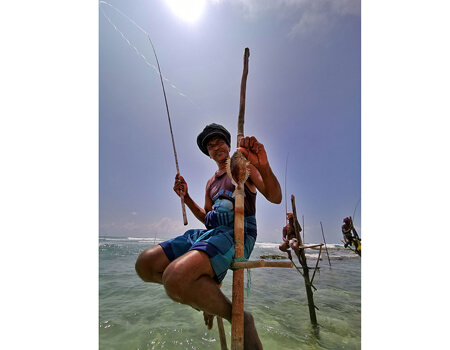 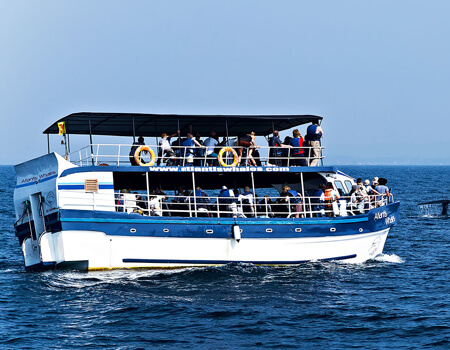 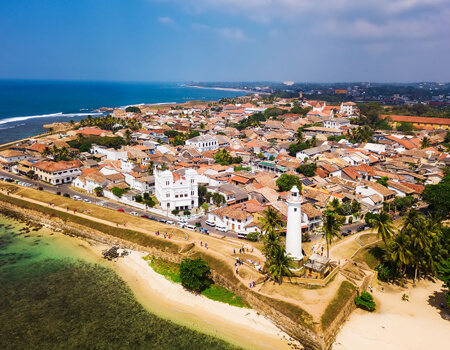 To many Thais, me included, the mention of Sri Lanka will suddenly bring to mind Colombo, the capital, Ceylon tea, the Temple of the Sacred Tooth Relic in Kandy, and some other religious sites. But what about Sri Lanka's southern coast? Hmm. Of course, there must be beaches and the sea. But what else?

Once a common sight along Sri Lanka’s shoreline, the stilt fishermen can now be spotted at a few locations in the south. From his perch on a wooden pole erected in the shallow water near a coral reef, the patient angler can observe the movements of the fish while making sure his targets do not detect his shadow and thus his presence. Spending hours on the pole and in the open Sun is obviously not an easy task. The catch is usually nothing more than small fish. It’s therefore understandable why the younger generations are not interested in this way of living.

A few kilometres off the shore of Mirissa near the southernmost tip of Sri Lanka the seabed drops sharply resulting in an underwater cliff where the coastal water meets the deep ocean where the world’s largest animal, the blue whale, roams. The marine mammal is a massive attraction for Mirissa, especially during the period from November to March. However, keep in mind that these giants may or may not show up. Not every whale-watching boat trip is as lucky as the one shown in this picture.

A recent visit to the island country gave me a glimpse of the answer. Organised by KTC World Travel Service and its partner tour operator, the trip was a trial of a travel programme aimed at introducing southern Sri Lanka to Thai travellers.

Since it was a trial, it wasn't perfect. Still, it was quite eye-opening.

The first day's itinerary promised a couple of hours at Galle Fort, a World Heritage site. Somehow, our group arrived there just in time to watch the sunset. A quick walk through its dim roads was enough for me to see clearly why Unesco included this place on the prestigious list. Not long afterward we had to leave Galle for Mirissa, where we would spend the night.

Early the next morning we set off to the pier where we took a double-decker boat out into the ocean with the hope of seeing a blue whale. After three hours at sea, we managed to catch sight of some shy dolphins and a dot that the guide claimed to be a whale several kilometres away. Like in Galle, I didn't get any good photos for my article. But this was understandable. Whale watching relies a lot on luck. Work aside, the boat ride wasn't a fail. The sea was beautiful. The air was very fresh. And, the Sun was surprisingly mild.

That afternoon we moved on to Yala National Park further east. The forest is located in a relatively flat area, which is now rare in Thailand since flatland is easy to encroach. The abundance of wildlife was astonishing. Along the park's dusty road, we saw several crocodiles. In Thailand, the awe-inspiring reptile is almost extinct in the wild.

The following morning we travelled towards the direction of Galle and dropped by Koggala to see the stilt fishing. Even though it was clear the fishermen were there for camera-wielding tourists rather than to catch fish, it was an exciting sight and finally, I got a picture I liked.

After lunch, we were back on the road headed toward Colombo. In the capital city, we had time to visit one temple instead of two as planned.

The next day the group visited a souvenir shop on the way to the airport for the flight back to Bangkok.

As earlier mentioned, the trip was a trial and it wasn't perfect. The actual programme should be improved.

This part of Sri Lanka is well worth a visit. Travelling there on your own is not that difficult if you wish to. Hopefully, whatever you learn from my group's mistakes will be of some help when you plan your trip. 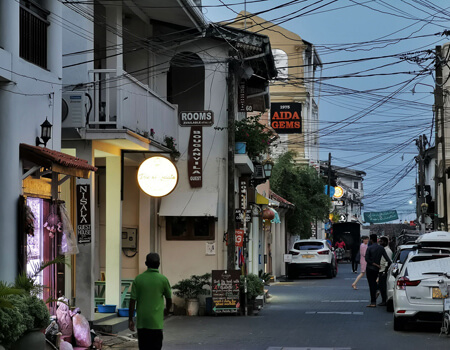 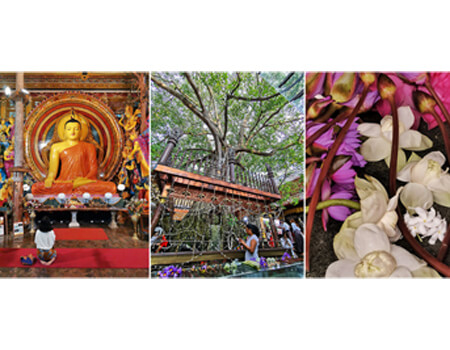 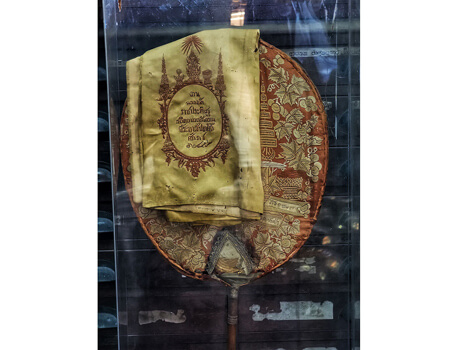 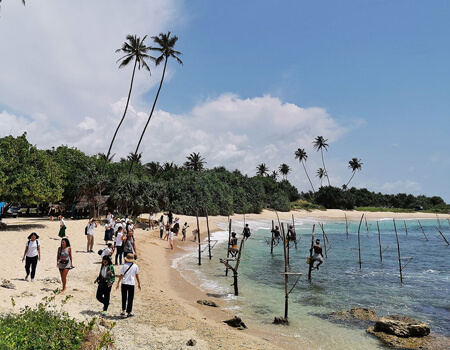 Listed by Unesco as a World Heritage site, the old town of Galle and its fortifications on the southwestern edge of Sri Lanka were founded by the Portuguese in the early 16th century. In the mid-17th century, the Dutch took over this fort city and further developed it to become one of the largest in Asia. Lovers of old architecture will enjoy exploring this historic part of Galle which is rich with old residential, commercial and government buildings, plus a majestic lighthouse and places of worship. Make sure you have at least one full day here if you get to visit this part of Sri Lanka.

Like in Thailand, in Sri Lanka the majority of people practise Theravada Buddhism. Gangaramaya in Colombo is one of the island country’s most important temples. It houses not only sacred relics of Lord Buddha and his major disciples but also a museum with an extensive collection of religious and art objects, as well as a variety of antiques from coins to film cameras. Within the complex stands a huge bodhi tree which locals and tourists alike come to pay respect to with lotus and other flowers as offerings.

Lanka, the former name of the island preceding Ceylon and Sri Lanka, enjoyed good relations with ancient Thai kingdoms despite the vast Indian Ocean that lies in between, thanks to the Buddhist faith. It is believed that monks from Lanka played an important role in strengthening Buddhism in Sukhothai. Through the following centuries, the religion in Siam prospered. Back in Lanka, however, it was a different story. So much so that during the reign of King Boromakot of Ayutthaya, Siamese monks needed to be sent to Lanka to re-establish Buddhism there which was in serious decline. The Siyam Nikaya (Siamese Sect) has become the major sect of Buddhism in the island country ever since. At Gangaramaya Temple, there are many objects that testify to the long relationship between Thailand and Sri Lanka. The talapata shown in this photograph is one of them. It was presented by King Rama V to a high-ranking monk from Lanka who was attending a royal rite at Wat Rat Pradit in Bangkok in 1884.

Stilt fishing is disappearing. Income from the catch is minimal and many of the remaining fishermen earn extra money from posing for tourists. It’s true that tourism has several negative impacts. But at the same time, it often keeps traditions alive. 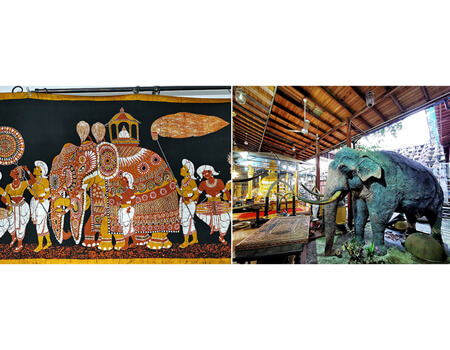 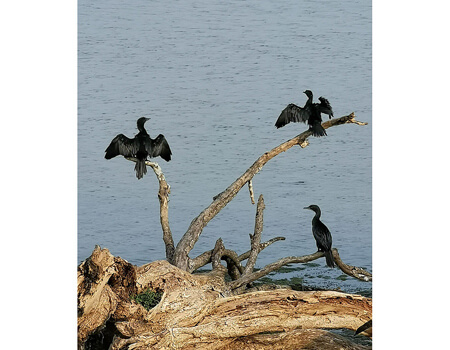 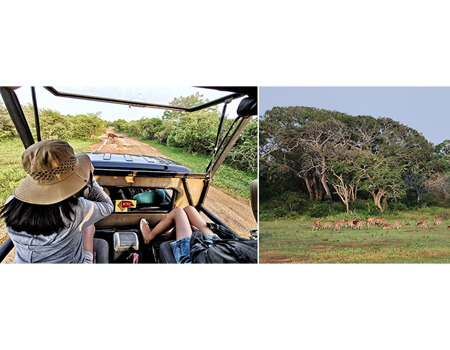 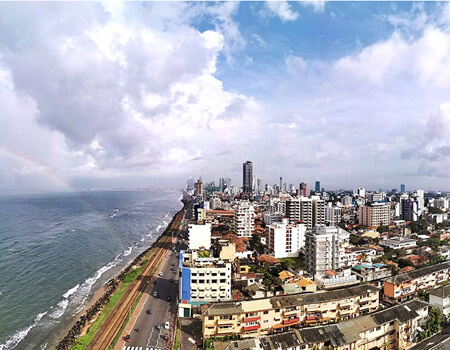 Both in Sri Lanka and Thailand, elephants are highly regarded. They played major roles in ceremonies and other important activities.

I was surprised to learn that safari tours are available in Sri Lanka. There are a number of places on the island where you can enjoy the experience. One of them is Yala National Park in the southeastern part. The wildlife species are mostly the same as those we have in Thai forests, such as Asian elephants, water buffaloes, deer, leopards, crocodiles and many familiar birds. But in the Sri Lankan park, the animals are not at all elusive. There were one or two everywhere I looked. It’s amazing that you can spot so many species so easily in one park. 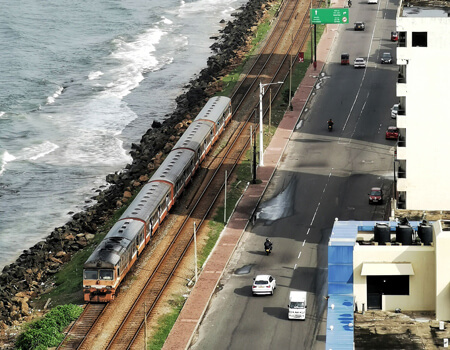 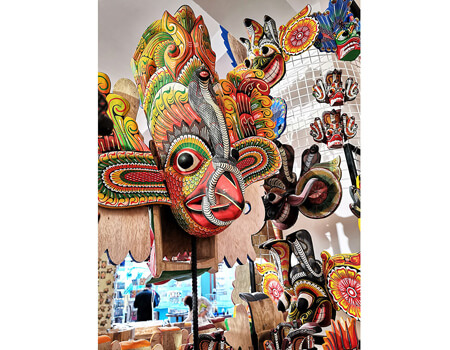 A faint rainbow appears above the sea just off the shore of Colombo. The capital of Sri Lanka looks fine to me but after the infamous Easter bombings last April, hotels have been very strict on security measures. At the one I stayed in, arriving guests needed to have their luggage scanned by an X-ray machine before entering the lobby. I was told it’s a common practice. From the top of the hotel, apart from the rainbow and the east side of the city, I could also see the railway which follows the coastline all the way to Galle and further south.

These colourful handicrafts are the demon masks, one of the famous souvenir items from Sri Lanka. They are made of wood and come in a wide variety of designs, each representing a certain demon or raksha. The locals believe that each design has supernatural power. The largest one in the picture, for example, is called Gurulu Raksha, or the Hawk Demon. It is said to have the power to ward off snakes. 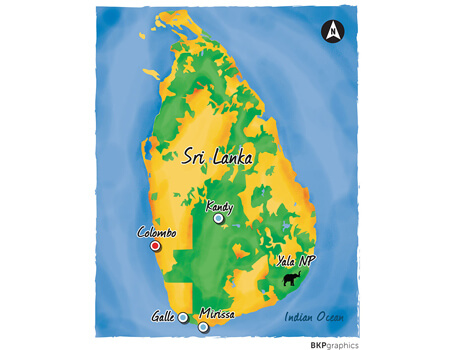