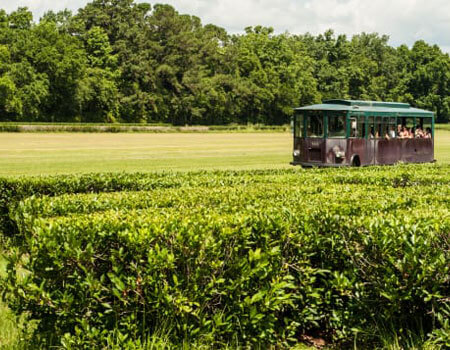 Wadmalaw Island, South Carolina (CNN) — The history of tea in the United States is as old as the nation itself, with one of the key events of the American Revolution being the Boston Tea Party, a 1773 act of defiance by colonists.

Although coffee is now the caffeinated beverage of choice for most Americans, the country still consumed 3.8 billion gallons of tea in 2017, according to the Tea Association of the USA.

But there's only one destination where tea is grown commercially in the United States. The Charleston Tea Plantation is on 127 acres of Wadmalaw Island in South Carolina.

In 1963, the Lipton tea company bought the former potato farm and transplanted untended tea plants that had once been cultivated in nearby Summerville, South Carolina, to the land. For Lipton, this was considered a research farm.

William Barclay Hall bought the property from Lipton in 1987. It was Hall who sought to make it a commercial producer. The Bigelow Tea Company partnered with Hall in 2003 and purchased the plantation.

Tea can be grown anywhere that is warm and humid with lots of rainfall and drainage.

It could be grown in much of the US South, but it has never been commercially cultivated because tea has traditionally been harvested by hand. Asian and African producers using hand-picked leaves have long dominated the market.

At Charleston Tea Plantation, they use a machine harvester to cut the leaves off of the plants.

"Every country has its own sort of flavor," Hall says. "It's a very light, bright, a very smooth and mellow tea that we produce here."

He should know; he's one of only a few remaining trained tea tasters in the United States.

Hall's grandfather was an English tea taster and trader who moved to Canada. Hall's father also became a tea taster, and Hall trained on a four-year apprenticeship in England to become a tea taster himself.

He worked in the tea-trading industry for years until he came upon the idea of buying the Wadmalaw Island tea plantation.

From soil to cup

Tea enthusiasts can see the whole process of tea-making at the plantation. All tea comes from the plant Camellia sinensis, the leaves of which are harvested to make tea.

Camellia sinensis was brought to South Carolina around the beginning of the 19th century by French botanist André Michaux. The plants were ornamental and not cultivated to produce tea as a commodity.

In the 1880s, the US Congress created subsidies to encourage tea cultivation and one of the people who took advantage of this was Charles Shepard. Shepard grew tea in Summerville, about 35 miles from Wadmalaw Island.

After Shepard's death in 1915, his Pinehurst Tea Plantation fell into disuse, but the tea plants survived untended until they were transplanted to Wadmalaw Island.

Many Indian tea plantations are carved into hillsides because Camellia sinensis bushes need lots of water, but they also require drainage. The Charleston Tea Plantation is flat, but tea can thrive here because the soil is sandy, draining rainfall efficiently into ditches.

The tea is harvested every 15 to 18 days during harvest period, which begins in May and lasts until October. At Charleston Tea Plantation, a machine harvester gathers the leaves.

The tea bushes themselves have a long lifespan.

In fact, Hall says "when you take a cutting of a plant and form a root system, that plant isn't one year old. It's the same age as the mother plant that you took the cutting from. So basically all these plants here date back to the 1880s."

A trolley shuttles visitors around the plantation for tours. You can also go inside the processing plant where the tea leaves are washed, chopped, heated and dried.

The three main types of tea are differently processed versions of the same Camellia sinensis leaves.

Inside the processing plant, the tea leaves travel on conveyor belts and into tubs, tanks and ovens -- starting bright green and ending up black.

From there you can go to the gift shop where you can take some American tea home, and try your palate as a tea taster.

The Charleston Tea Plantation is about a half hour's drive from Charleston.