Exploitation On The Estates 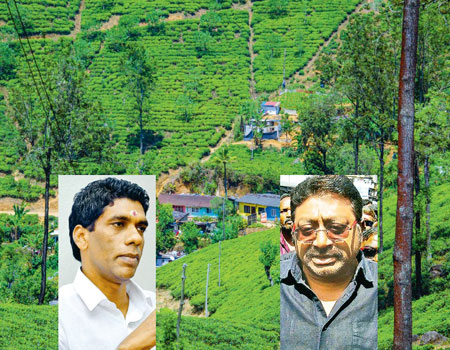 "These people are mine. No one can talk to them without my permission. How can you just sneak into the estate and talk to them and ask about their salary and their trade union fee? They have been paying this fee for a long time and no one from their community questioned it; now you are here to ask about their trade union fee and salary when the elections are around the corner."

These were the concerns raised by the Ceylon Workers' Congress (CWC) Maskeliya Party Office Chairman, who did not want her name revealed, voicing out against Ceylon Today after this newspaper interviewed workers at the estates.

When asked why she would not allow the Media to talk to the people living in estates, she said they were forbidden from talking to outsiders without the permission of the Chairman.

Stressing that tea estate workers in Maskeliya are under her jurisdiction, the Chairman threatened that she would take action against us if we were to enter the estates without her permission.

"These uneducated people do not have any clear idea about what they are saying. We have warned them not to talk to outsiders and not to let anyone enter the estates. I heard that you asked about the Sandha trade union fee from the people.

Commenting on the issue, NUW Leader, MP Palany Digambaram emphasised that trade unions would not need to collect fees if the Government took up the responsibility for these people's needs and rights. The trade unions exist to represent the workers and ensure that reasonable contract terms and working conditions are maintained.

"When you set mandatory targets saying that workers should definitely pluck about 18-20kg of tea per day and maintain about 75 per cent attendance, it is inhumane. There should be someone to talk about these problems, and that is why we are here - to talk on their behalf. That is why we collect the money," he added.

He noted that they maintain around 22 offices to collect these fees, but added that tea-pluckers were only to pay this amount if they wanted to; and if paid continuously, they would receive benefits when needed.

It was noted that the CWC's trade union fee is Rs 233, while the NUW charges Rs 150. When asked why these fees differ between unions, Digambaram said that it depended on the union heads and administration of the party in question.

"It can be different from party to party. Our trade union, which is led by our party, collects Rs 150, while other parties collect another amount," he explained.

It was also revealed that the two trade unions are established under two MPs - the NUW is under MP Digambaram, while the CWC's Leader is Minister of Community Empowerment and Estate Infrastructure Development, Arumugam Thondaman.

Due to this, members of each trade union are expected to cast their votes for the respective Parliamentarian at each election, ensuring that these leaders enjoy a guaranteed block of votes. This practice has been in place for so long that it has become mandatory; workers are bound to cast their votes in this manner.

This revelation was made by Estate Workers Centre Co-Organiser, Mark Prabhakar, who pointed out that trade union influence the votes of workers, regardless of their contribution to the people.

"There is no law in place to charge a trade union fee; this is being charged according to the politicians' personal agenda. The trade union fee or Sandha was introduced as a welfare charge, where payers receive benefits from it, which is not happening.

These innocent people never see any benefit, but the politicians' representatives will not allow people to cast their votes unless they have paid their trade union fee," he said.

When asked how they track workers who have paid the trade union fee if it is used as a right to vote, Prabhakar said that these people are easily manipulated as they are vulnerable and don't raise questions.

"The authorities, starting from the politician to the party representatives at grassroots level, take decisions and sign agreements without the people's consent, and then the people bear the consequences," he added.

Contradicting Digambaram's statement, Prabhakar said that the Sandha payment is mandatory for all workers, whether permanent or temporary. He also added that temporary workers were expected to hand over a formal letter to the union office at their area, requesting to charge the trade union fee.

When Ceylon Today paid a visit to Maskeliya's estates, we didn't find anyone who was not paying the fee. The amount charged is shown in the pay slip for permanent employees, but for temporary workers it is not shown, and they have no idea where the money is going.

According to Prabhakar, these estate workers should fill a form and sign a document once every six months, which is when they have the chance to change their trade union to one they prefer, but it does not mean they can opt out of the trade union fee.

"These trade union leaders, called 'Katchi Thalaivar', are supposed to discuss labour issues, but they never do it. Right now, these people do not know what is being done on their behalf, while the trade unions sign various agreements with the Government that see them going through hard times," he added.

Attributing the anti-media stance entirely to the CWC Maskeliya Office Chairman, CWC Vice-President, Palani Shakthivel said they do not consider estate workers or employees who pay the trade union fee as under their governance, and that these people have the freedom to speak to anyone at any point. Shakthivel noted that the collection of the trade union fee is being done according to the law, and there is nothing to it beyond that.

When asked whether this trade union fee would increase if the Government implements the increased daily wage of Rs 1,000 from 01 March, Shakthivel affirmed that it would increase likewise according to the law. He also added their respective offices would take relevant action in this regard.

Commenting on this, Prabhakar said that since this is the off-season for tea and there is not enough harvest in the estates, it is hard to pluck 18kg per day - but none of the party leaders, nor the trade unions, had talked about this. Prabhakar insinuated that the trade unions are being used for political purposes and neglecting their real duties.

Even though the previous Government implemented the 1990 Emergency Ambulance Service, which was expanded islandwide recently under Indian grant assistance, the ambulances at the Maskeliya Police Station only service the town, not the estates. When asked why these ambulances are not servicing the estates, authorities who did not want to be exposed said that this was because the estates are in mountains and the roads are narrow, so it is hard to enter these areas.

Digambaram, who is the former Minister of Hill Country New Villages, Infrastructure and Community Development, said that he gave away four ambulances to the hill country in his capacity.

Digambaram said they would take relevant action to suspend these trade unions if the Government is ready to solve their issues like daily wages, hospital facilities and sanitary issues.

The bottom line is that politicians are using these people while claiming they are part of their community, forbidding outsiders from even talking with them casually.