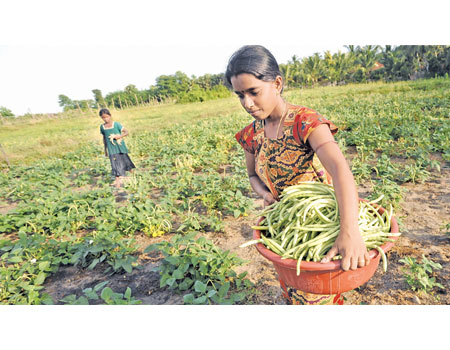 When you fly from Europe over some desert Arabian lands to Sri Lanka and see how green and eye-catching the whole island is, you indeed realize what a blessed inheritance our land has been to us.

Independence dawned during our high school days. Then we entertained dreams of achievements and success. Industries were hardly begun. Agriculture that seemed so natural to us sustained us. Tea, rubber and coconut plantations brought in the much needed income including foreign exchange of which we had a good balance. The optimistic situation also gave so much hope as possibilities of improvements emerged. Prospects of increased production and harvests of paddy and cultivation of sugar cane forecast not only possibilities of self sufficiency in rice and sugar and satisfaction for the masses of people but also foreign exchange earnings through exports of our agricultural products.

Success And Failure In Agriculture

After D. S. Senanayake, Dudley Senanayake, M. D. Banda and Gamini Dissanayake, those who prepared the ground for agriculture seem to have had no consistently workable plans for years on end.

Paddy has been cultivated in Sri Lanka from before 100 BC. Water collecting reservoir tanks were ingeniously built for agriculture and Sri Lanka had been known as the granary of the East. After Independence lands in Gal Oya and Mahaweli areas were opened and new irrigation systems established. Now it is cultivated in over 800,000 hectares of land engaging 1.8 million farmer families. And we produce 95% of our requirements. We need to increase the yield to feed an increasing population.

A vision for agriculture should embrace all that is cultivable on our soil and the provision of nutritious agricultural products to our own people and to those beyond our shores who would buy our produce.

All the governments that have exercised power after 1956 have had a preponderance of ministers of low intellectual calibre. They could not visualize the possibilities nor were they disposed to listen to qualified professionals and experts nor were they capable of innovation or creativity in the financial allocations, use of the natural and human resources, research and communication of appropriate data to the farmers. Evidence of lethargy, inefficiency and incompetence of ministers are directly related to their undisciplined upbringing, low intellectual calibre and lack of sufficient education.

The political parties and their leaders do not visualize the production needs of the country in any sector of activity when they choose and appoint their party organisers and candidates for elections who when elected become managers of public affairs directly intervening in the major public work projects that need to be carried out.

Corrupt politicians and trade union leaders who become manipulators have had no proper education and anything of the competencies required to organise and direct the production of a multiplicity of agricultural and industrial commodities of good quality to meet the vital needs of a demanding market. They do not have any idea of nor are they concerned about the costs of production, just and fair incentives given to producers and the saleable price of products. So, they and the corrupt bureaucrats under them collude in various procurements and deals that adversely affect and raise the costs of production to make prospective consumers in the country and abroad reluctant purchasers.

At the time of Independence, Ceylon Tea was known throughout the world for its unsurpassed quality and flavour. Introduced into Sri Lanka in 1867 by James Taylor who came here 1852, tea is now grown on 190,000 hectares of high land and directly and indirectly employs nearly 215,000 employees on tea plantations and gives further employment to almost 800,000 more. It brings an income of over 1.5 billion dollars annually.

Even though all our producers want to benefit from the prestige of Ceylon Tea all those dealing with tea have not paid due attention to preserve its good name as they have undermined it through selfish, shameful and short-sighted trade practices that has cast a dark shadow over the prestige of Ceylon Tea in a manner very disadvantageous to the long term good of the whole tea industry. Selfish tea exporters should be taken to task and severely dealt with.

The then SLFP government nationalized the plantations, broke them into fifty acre plots, established state plantation bodies, packed them with their political stooges incompetent in their exalted positions and ruined the plantations.

SLFP and Marxist coalition policies drove the tea planters to pioneer tea planting and production in other countries that have now become our competitors. Selfish dealers with political patronage have also degraded the tea they have exported, lost the confidence of buyers abroad and caused irreparable damage to the good name of Ceylon Tea. Sri Lanka that was the undisputed leader exporting quality Ceylon Tea has descended to fourth place.

Our production of quality rubber enabled us to procure rice from China when R.G. Senanayake signed the Rubber-Rice pact as long ago as in 1952 and a UNP Government established a long-lasting friendship with the Chinese people that has been of mutual benefit to Sri Lanka and China. Dr. N. M. Perera was praising the sensibility of the then UNP government’s policy decision even when a big power, the United States was against it. Coconut plantations were maintained evenly and while the producers earned a fair return on their investment, the consumers got their coconuts and coconut oil and oil based products at a reasonable price.

Even though rice production has been vastly improved over the past few decades, we are not yet able to give the farmer a fair and encouraging price for his produce and the consumer his staple food at a reasonable price, all because of inefficiency, incompetence and corruption on the part of ministers and the so-called democratic socialism’s bureaucracy.

Sri Lanka has the capacity to produce a variety of good vegetables, yams, luscious fruits and her fragrant spices that has made her known and famous from ancient times. Today, exotic flowers too are grown for export. All activities connected with cultivation need to be systematically done and products brought up to standards of export quality and cared for by honest men managing the development of exports. But mediocre politicians interfere in everything. One such minister after gallivanting abroad, indulging himself returns and submits a voucher for a big sum for payment that needs approval by the top man managing export development. In view of the corrupt minister’s illegal request, rather than accommodate himself to it, the top executive prefers to resign rather than approve wasteful expenditure. Such ministers cannot develop Sri Lanka; they should be barred from politics or investigated and banished to jail. However, they get fixed in high governing positions.

Sixty years ago, Italy and the countries of the Mediterranean would have been a good market for our fruits and vegetables. It is only now that a Fruit, Vegetable Producers, Processors and Exporters Association has got engaged with Noberasco an Italian family enterprise that has come to invest in the production of fruits for the Italian market.

There is news once again about an entrepreneur wanting to invest in dairy farming. Blowing hot and cold over development of dairy farming has been going on for a long time. At least now, it should be pursued to a successful end for the mutual benefit of Sri Lanka and the investor concerned.

Management, conservation and productivity of our agricultural land have to be maintained and improved. More research needs to be done. Ministers of Agriculture and bureaucrats seem to be interested only about the maximum they could personally get out of investments in the agricultural enterprises during their five year term of office and that too from various commissions and even on leases and rents on buildings taken by the ministry that are sometimes left unused!

Providence has endowed Sri Lanka with a fertile cultivable land, enough and more water for people’s use, to irrigate the lands of the hardworking farmers dedicated to cultivation, and even produce energy and power. We have failed to harness sufficiently the water productively but let it cause damage through floods and inundation. Uncultured, uneducated and uncouth politicians were congenitally short-sighted. They not only used farmers but also the management of water and manure for their political ends. How long ago did our ministers and top bureaucrats visit Israel to learn of their innovative methods of agricultural production and dairy farming? Did they learn anything after spending much money on travel and lodging in luxury hotels? Their intellectual capacity and managerial understanding was so puerile that their conception and sense of power was like a knife in the hand of a monkey. Their selfishness made the issues more complex and even intractable that ultimately the country was led to bear the tragic consequences of their foolish policy decisions.

It is also common knowledge that over 35% of the paddy, vegetables and fruits produced in Sri Lanka are eaten by various wild animals. The vegetables and fruits that we try to grow are eaten by monkeys. Though monkeys are a menace to cultivators, they seem to find some sort of camaraderie in highly influential comrades in every Cabinet who would let the farmers’ cultivations be consumed by them rather than find ways to eliminate destruction of vegetable and fruit production by selling the monkeys, snakes and other wild animals to earn much needed foreign exchange.