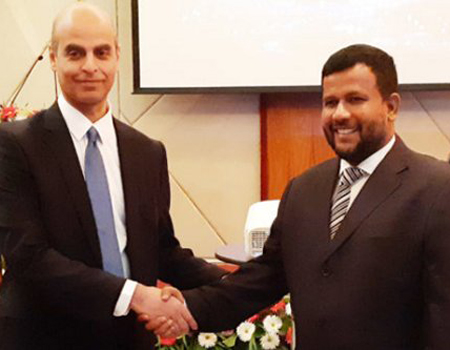 Egypt, the first Arab and African nation ever to establish diplomatic relations with Sri Lanka says that it has been one of the key markets for Ceylon Tea and now has 22 Bilateral Agreements with Sri Lanka.

However, Minister Bathiudeen says the trade between the two countries has an immense potential to expand.

"When we look at the annual trade volumes I can see that there are immense but un-realized trade potentials that we can mutually explore to further develop our bilateral trade beyond the current basket of products," Minister Bathiudeen said addressing the 66th National Day Celebrations of Egypt held at Taj Samudra, Colombo on 16 July.

The Minister pointed out that the Joint Commission on Trade can help to increase the bilateral trade.

"Our two countries entered into a Trade and Economic Co-operation Agreement in 1987 and had the First Joint Committee was subsequently upgraded to a Joint Commission. I am happy to note that we are preparing to hold the next Session of the Joint Commission in Colombo," said the Minister.

Joining the celebrations with Ambassador of Egypt to Sri Lanka Hussein El Saharty were many members from the diplomatic corps in Colombo.

"Becoming the leading tea exporter to Egypt was one of Sri Lanka's major achievements. Last year our total trade with Egypt including tea exports was at US$ 48 million. 30 percent of our exports to Egypt last year was tea followed by rubber tires and coconut products," Minister Bathiudeen added.

Sri Lanka and Egypt signed an Economic and Technical Co-operation Agreement in March 1987 paving way for a Joint Committee in 1990. The Committee was elevated to a Joint Commission which met in 1996 for the first time and in November 2002 for the second Session in Cairo.

Sri Lanka exported US$ 6.4 million of tea to Egypt last year and in the last five year period a total of US$ 46 million tea was exported to Egypt from Sri Lanka. As for imports, 32% of total imports from Egypt last year were essential oils, followed by sugar and fruits.