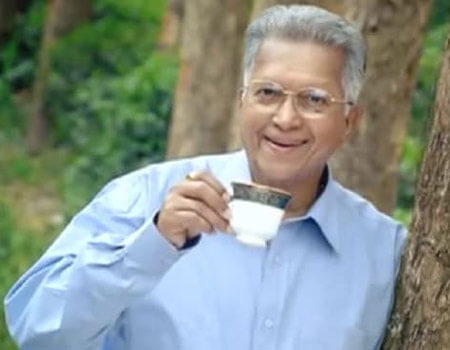 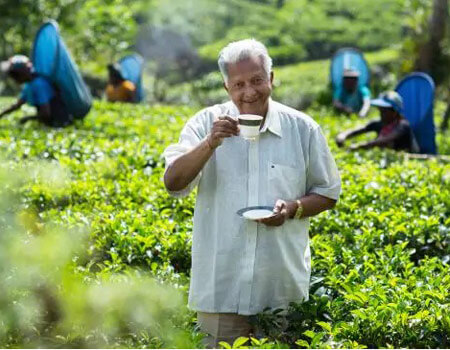 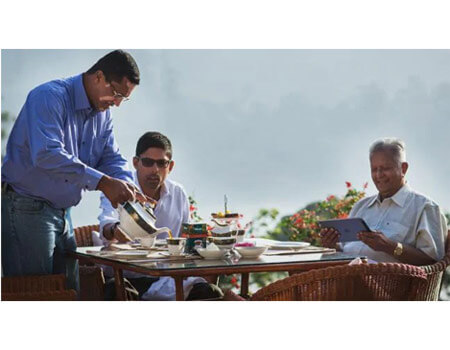 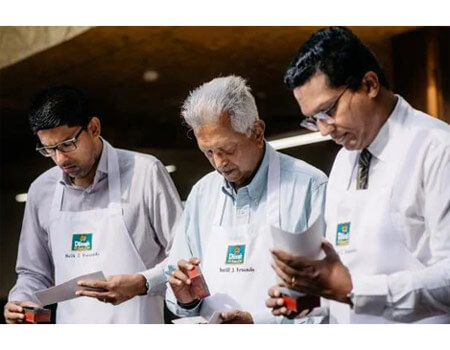 It’s hard not to notice this iconic face during a trip to Woolies or Coles, but there’s an important reason behind his presence.

Dilmah founder and chairman Merrill J Fernando’s face is etched in Australian television folklore thanks to the nostalgic commercial featuring the softly spoken Sri Lankan imploring consumers to “do try it”.

But the presence of the tea pioneer’s smile on the widely adored ad had a far more profound purpose than a pursuit of cheap fame.

Mr Fernando’s objective was to put a face to the product produced in his homeland, to help squash the colonial exploitation he said was rife when he began his career with Ceylon Tea in his teens.

He was selected to travel to the world’s centre for tea and spices on Mincing Lane in central London where he saw first hand how tea was purchased for a small fee, mixed, packaged and then sold for a massive profit.

“These guys in London, the traders, they bought tea from other origins, mixed it and sold it as their own tea,” Mr Fernando told news.com.au.

The bastardisation of the beloved produce Sri Lankans hold so dear made Mr Fernando furious. He made a promise to himself he would one day start his own tea company and ensure the profits ended up in the rightful pockets.

And 34-years later, at the age of 58, he finally followed through with that pledge.

“This brought integrity back to tea, freshness, quality, single origin tea and the profits were shared,” Mr Fernando said.

“Dilmah is a service to humanity. Dilmah is not a faceless multinational, Dilmah has a face.”

The tea veteran says most large companies are reluctant to present themselves to consumers but it was important for him to put himself forward and make himself accountable for the business’s decisions.

“In our case, there is a face to Dilmah,” Mr Fernando says. “They know I am the man behind it, whether I do right or wrong they can write to me and blame me.”

When the Dilmah founder began his push into the Australian market, his ethical pursuit to sell single origin tea and commitment to alleviating poverty for the humble workers in his tea fields was met with disdain.

“Two Englishmen working at a big tea company told me, ‘we give you the interest, you keep supplying the tea, don’t do our job, we do it best,’” the gentle 89-year-old recalled.

Mr Fernando’s humanitarian work was recently acknowledged through an honorary doctorate at the Massey University in New Zealand.

The award relates to the decades of conservation work in Sri Lanka as well as the founder’s MJF Charitable Foundation which is funded by Dilmah profits to help serve 10,000 people each week.

Mr Fernando’s son and company chief executive, Dilhan Fernando, told news.com.au his father “very much” became the face of producers from developing countries standing up to multinational companies and demanding their share of the profits.

“It wasn’t just about empowering a producer but also the sharing aspect,” he said.

“My father is very much the face of that because it is his philosophy that has given us the funds and the resources to do all this.”

Dilhan said Mr Fernando is iconic not just from television fame but as the first local tea, coffee or cacao producer from an emerging nation.

“It was a time when our political colonialism had been replaced by an economic form of colonialism, so he was viewed as an upstart that should not be allowed to exist,” he said.

“But for us, we realised that if you look at inequality, sustainability, environmental or humanitarian, the key lies in empowering the farmer.

“And so that is what gave my father that impetuous because of course it is about the quality and the integrity of what we offer the consumer, but equally it was about giving the producer the possibility to build education, to build innovation, to fight deforestation.”