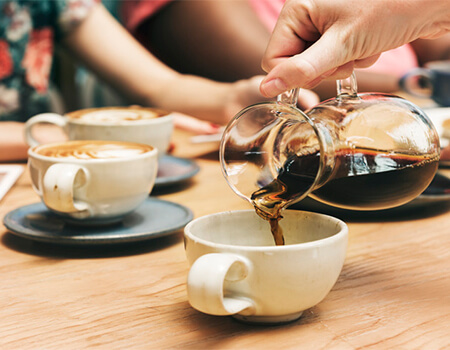 In the United States, more than 1 in 10 adults have type 2 diabetes. Globally, the disease affects an estimated 422 million people.

Diabetes increases the risk of a range of health conditions, including cancer, bone fractures, dementia, and circulatory diseases.

Although medications can significantly reduce the health risks associated with diabetes, experts also consider lifestyle changes one of the best ways to control type 2 diabetes. These include eating a healthful diet, doing more physical activity, and stopping smoking, if a smoker.

Over the years, many scientists have investigated the potential health benefits of green tea. Some studies have shown a link between the consumption of green tea and a lower risk of developing diabetes.

Other scientists have shown that drinking green tea might improve glucose control and insulin sensitivity. However, until now, few researchers have examined how green tea might benefit people with type 2 diabetes, specifically.

Coffee has also enjoyed a great deal of scientific attention over the years. There is some evidence that a high coffee consumption leads to a lower risk of type 2 diabetes compared with a low consumption.

Beyond diabetes, there is some evidence that coffee consumption is linked with a reduced risk of mortality. However, as with green tea, few scientists have investigated this association in individuals who have diabetes.

Although there are inherent difficulties in studying the effects of specific foods on health conditions, evidence that green tea and coffee might benefit certain aspects of health is mounting.

Recently, researchers from Kyushu University, Fukuoka Dental College, and Hakujyuji Hospital, all in Japan, set out to investigate the effect of coffee and green tea on the death risk of people with diabetes. They recently published their results in BMJ Open Diabetes Research & Care.

The scientists took data from the Fukuoka Diabetes Registry, an ongoing study designed to assess the impact of medication and lifestyle on diabetes outcomes. In all, they used data from 4,923 participants with type 2 diabetes. These individuals were aged 20 years or older with an average age of 66 years.

Importantly, the participants also provided details about their diet, including their consumption of coffee and green tea.

The primary end point in this study was mortality. The researchers followed the participants for a median of 5.3 years, and during follow-up, 309 people died.

Individuals who drank more than one cup of green tea or coffee per day had lower odds of dying from any cause in comparison with those who drank neither. The lowest odds were associated with drinking higher quantities of both green tea and coffee.

Even after accounting for variables that might have influenced their analysis, the authors conclude:

The authors explain that “the combination of higher green tea and coffee consumption significantly reduced all-cause mortality risk by 63%” over a median follow-up period of 5.3 years.

Looking at coffee alone, the researchers found that drinking two or more cups per day was associated with 41% lower odds of dying during follow-up.

When calculating the odds of dying among green tea-drinkers, they found that drinking four or more cups each day was associated with 40% lower odds.

However, drinking both beverages each day produced the largest effects:

As with most studies that investigate the effect of a single type of food or drink on a population, this research does have certain limitations.

For instance, information about each participant’s coffee and green tea consumption came from a questionnaire. No one’s memory is perfect, and this brings unavoidable errors into the data. Similarly, dietary information came only from the participants’ reports at the beginning of the study, but over the course of 5 years, beverage habits might change.

Additionally, the scientists did not collect information about certain factors that might have influenced the results, such as level of education and household income. The authors explain the potential importance of this:

“Higher educational or income levels may be associated with greater coffee consumption; they may also be related to lower mortality risk.”

Also, importantly, the study was observational, so it is not possible to prove that green tea and coffee reduce the odds of dying — only that consuming these beverages is associated with lower odds.

Although it is important to be mindful of such important limitations, these results do add to a body of evidence that green tea and coffee might benefit certain individuals in some way.