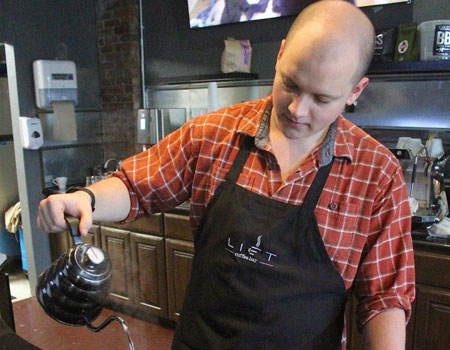 Green tea is said to be good for you, and local stores offer this type and others.

Although it might not have the properties of a mythical elixir of life, tea could potentially prolong a person's time on earth, according to a recent study published in the European Journal of Preventive Cardiology.

The study reported cardiovascular disease is the leading cause of premature death worldwide, and concluded that tea consumption is associated with reduced risks of CVD and all-cause mortality, "especially among those consistent habitual tea drinkers."

Atherosclerosis is the buildup of fats, cholesterol, and otters substances in and on the artery walls. More than 100,000 Chinese adults were monitored since 1998 for the study. Of those who consistently drink tea - compared to those who rarely drink tea or not all - they were found to have been diagnosed with atherosclerosis, on average, 1.4 years later and live 1.26 years longer.

"You can make a tea out of basically any herb, so there's thousands of different herbs that you can combine to make a tea out of," said Daniel Franke, of Oasis Health Food Store. "In that respect, it's a whole medicine system."

Out of 14,081 individuals who were surveyed twice over an average of eight years, those who habitually drank tea had a 56 percent lower risk of fatal heart disease. And 49 percent of the habitual tea drinkers consumed green tea, while only 8 percent preferred black tea. The remaining 43 percent preferred scented tea or other types.

"One of my favorite teas is going to be the Yerba mate," said Franke. "It's a South American tea. It's a different type of caffeine. It seems like it's a slower-release caffeine. It just seems to be a little bit better for me than coffee, even though I like my coffee, too."

Green tea is thought to have increased health benefits, as it is laden with antioxidants and nutrients.

Franke said it has EGCG, or Epigallocatechin Gallate, which according to a study found in the National Institutes of Health, can have a wide range of therapeutic properties, including anti-atherosclerosis.

Aside from long-term health value, teas can be helpful for people during the cold and flu season. Franke said olive-leaf tea is good for colds.

"And then pau d'arco, goldenseal, and echinacea are antiviral," he said. "So all of those would be candidates for a cold tea, and there are a lot of different formulations of cold teas."

Oasis Health Food Store, at 111 N. Muskogee Ave., has hundreds of herbs and teas for people to try.

For those not attempting to pull an all-nighter, Noah Scearce recommends the Detox.

"The thing about the Detox is that it's caffeine-free," he said. "So it's got lemon peel, organic sage, lemon grass balm, and organic lemon grass. It's very citrusy and lemony. And it has zero caffeine, so if you're looking for a hot drink without caffeine, that would be a good one."

The most popular teas at Lift are black teas and the Blood Orange Smoothie. Scearce would recommend using Earl Grey, English breakfast, or chai for tea lattes.

"Those teas are brewed at a higher concentration, mixed with steamed milk, or almond milk, or soy milk and so on," he said.

Down at Drip the Beverage Lab, 500 N. Muskogee Ave., the coffee shop also has several different categories of tea. It has green teas, oolong teas, white teas, black and dark teas, herbal teas, and tea lattes. Shawn Eddie and Prazu Gazurel agreed the white tea is a "very light-tasting type of tea," and has more caffeine than a green or herbal tea.

"The herbal teas are really good when you're sick, like the Turmeric Ginger and Mystic Mint," said Gazurel. "It's really helpful."

Although tea can have added health benefits for those who drink it, some might just enjoy the social aspect of sitting down with a nice cup of it.

"It's nice to have a tea party, bonding dads and daughters throughout the ages," said Franke.