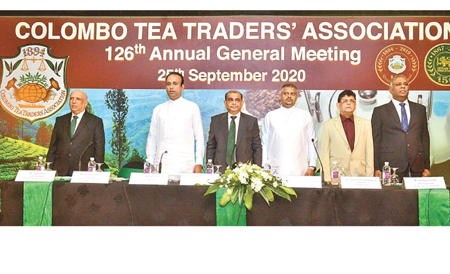 The Colombo Tea Traders’ Association( CTTA) with the support of the Brokers’ Association worked tirelessly to conduct the first ever e-Auction being held from April 4 to 7, facilitated by a digital platform, CTTA Chairman Jayantha Karunaratne told its 126th AGM held in Colombo on Friday.

“This enabled the industry to continue the uninterrupted movement of teas, mitigating the cash flow challenges faced by both the buyers and the sellers and ensured that the wheels of the industry recommenced its forward movement,” he said.

The Chairman who is also the – Founder, Chairman and Managing Director of Imperial Teas Group said that the adoption of the ‘Ceylon Tea Road Map 2030’ was conceived through the determination that the industry should guide its own destiny, with the compelling objective of enhancing the image and value of Ceylon Tea in the context of all stakeholders.

Its strategies were developed to be steered in implementation through four dynamic initiatives, namely, Quality and Processing, Sustainability, Branding and Marketing, and Research and Development, and with the ultimate goals of increasing production to 350 million kgs, increasing export earnings to US$.3 billion and increasing, by twofold, the real earnings of estate employees and small-holders.

He said that there was unanimity that the gradual transformation of the Tea Industry from a fundamental primary agricultural programme to a sophisticated industrial enterprise is indispensable for dynamic progress and it was decided that the next Colombo International Tea Convention should be held in 2021.

The Chairman thanked the Minister and the Chairman of the Sri Lanka Tea Board for temporarily suspending the collection of the Promotion and Marketing Levy with effect from July 2020. “The trade is encouraged that it has now been decided to reduce the levy to Rs.3 per kg., of which Rs.1.50 will accrue to the Promotional and Marketing Fund, while the balance will be granted to producers to enhance replanting,” he said.

The Chairman also cautioned over concerns raised regarding the lack of progress in the registration of the Geographical Indication (GI) of Ceylon Tea. This initiative, which commenced over 15 years ago, is driven by the Sri Lanka Tea Board and has encountered many impediments, he said. (MFJ)