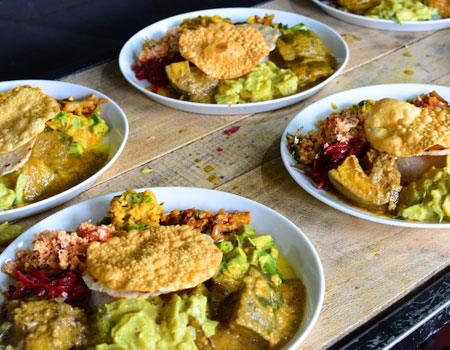 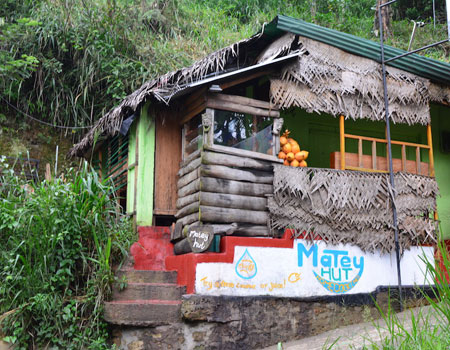 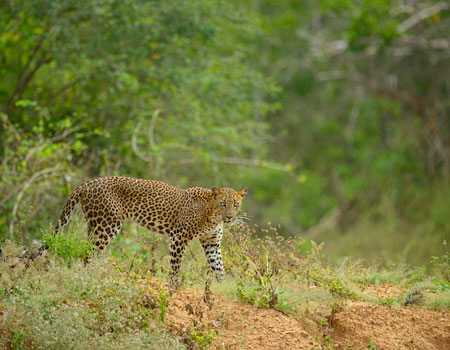 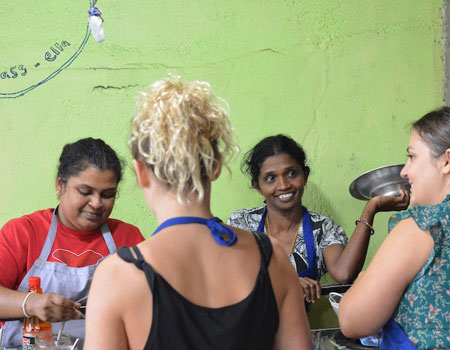 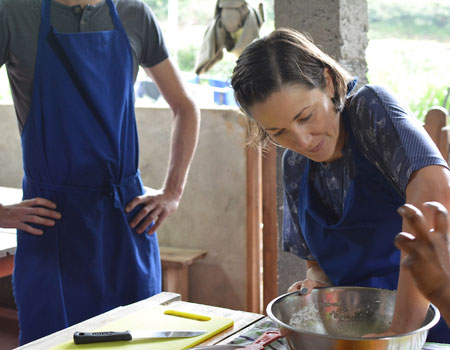 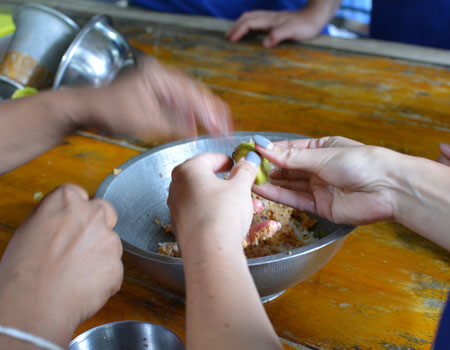 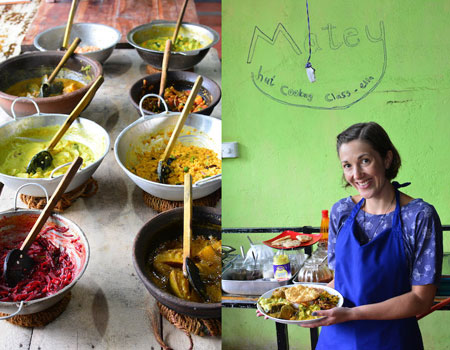 A whistle-stop tour of southern Sri Lanka is a culinary overload of colour and fragrance – but ordering a beer can be, er, weird.

Burdened by the weight of my own trinket haul, I arrived in Colombo desperate for a cup of Ceylon tea.

Crushed in the direction of the bus door, I was spat out on the smoggy streets of Sri Lanka’s capital. My boyfriend Matt was somewhere behind me, tangled up by street vendors who bustled past us towards discerning locals calling from open bus windows for isso vadei (spicy lentil cakes with shrimp on top).

We’d been travelling for a long time and the humidity confused me. As far as my body was concerned we were still in Cahersiveen warming ourselves up with Irish whiskey.

This was the homeward leg of our year abroad. Our friends Pat and Anna were waiting for us in the seaside fort city of Galle on the island’s southwestern edge. We’d last seen them in Georgia, where we’d gorged on khinkali (mutton dumplings), khachapuri (cheese-filled bread) and drowned ourselves in litres of cheap amber wine.

The difference now was that they’d worked up an appetite for Sri Lanka’s famed cuisine by walking the length of the Jordan Trail – a 30-day, 600-kilometre hike through the desert. Whereas we’d been fattened up by family in Ireland with bacon and cabbage lashed with parsley sauce.

The home of Ceylon tea, curry and cricket was supposed to send us back to New Zealand with full bellies, in time for the Boxing Day test. Ours was to be a whistle-stop tour of the south, stopping in Galle, Weligama Bay, Tissamaharama and the small hilltown Ella before looping back to Colombo.

We’d established Sri Lanka’s best food is generally found on the tables of guesthouses around the country, rather than in restaurants, and booked accordingly.

Travel-tired, we would promptly adopt a tongue-in-cheek rating system for our meals inspired by the finicky bullshit people taunt businesses with on TripAdvisor and Booking.com.

Early in the trip we’d all relied on review sites, but after a while away our real fear was that we’d become like the entitled pricks we were reading. Take for example, the woman who had given Kumar Sangakkara and Mahela Jayawardene’s Colombo restaurant, Ministry of Crab, a brutal two-star review because she had to walk through a courtyard to access the bathroom – left unchecked, there was no knowing where our lives of luxury would lead us.

In this spirit, we gave our guesthouse in Galle just two stars for serving a platter of just six fruits when we all knew full well there were dozens of varieties available on the island. This review was later revised to just one star due to the confusion caused by wood apple.

Our family-run guesthouse in Weligama was awarded five stars after our host showed us how to best eat hoppers – a South Asian pancake shaped like a bowl. The specialty snack is made of fermented rice batter and coconut milk and served with an egg, curry sauce, spicy sambol or palm treacle. You load it up with sweet or savoury extras and then stir it all together into a delicious mix.

Our safari tour guide in Tissamaharama, the gateway to Yala National Park, was awarded five stars for the thoughtful preparation of our packed breakfasts including egg and onion sandwiches, curry rolls and fruits, but he lost most of them after we threw it all up during the drag race to the entrance gate (this didn’t actually happen, but the jeep race at 4am is no joke).

Sri Lanka’s National Parks are unmissable. Yala National Park, the country’s second largest, covers 979 square kilometres and is one of the best places in the world to spot leopards. We were lucky to see a glimpse of a male napping in some undergrowth and by chance pulled up alongside a family of elephants bathing. For bird lovers, there are some 215 species in the park including the rare black-headed ibis, egrets, the Indian peafowl and flamingos.

The only thing that feels endangered in Sri Lanka is lunch. Noon comes around quickly when you’ve been dished up a three-course breakfast. Most days we’d opt for a snack around mid-afternoon instead. As far as street food goes, you’re spoilt for choice. I liked kottu, traditionally a slapdash dish of leftovers made with fried and sliced godamba roti, vegetables, egg or cheese if you’re feeling fancy. Marketed as ‘the hamburger of Sri Lanka’, it would be better described as being in the tradition of the classic Sunday fry-up – anything you’ve got goes in. You can also pick up parcels of fried rice, coconut roti and pancakes stuffed with coconut treacle.

It’s worth mentioning that Sri Lanka – which might be viewed as a beach holiday destination akin to Thailand, Vietnam and Cambodia – has a pretty conservative approach to the sale and supply of alcohol. Women briefly won, and then lost, the right to buy booze this year after the president upheld religious and conservative groups’ concerns that allowing women to drink would lead to a surge in alcoholism and a breakdown in family values.

Despite the fact the law is barely enforced for locals, and ignored for tourists, it still makes ordering a beer a little weird in the less touristy parts of the country. The difficulty for businesses to obtain licences means that while alcohol might be on offer, it won’t always be on the menu.

You won’t have room for beer anyway if you eat like we did. You need to prepare yourself for dinner like you would a degustation. It is not unusual to be served between six and 12 different curries as well as bread, poppadoms and red rice. Most, if not all of the curries are vegetarian, with small portions of fish and chicken served on the side for flavour.

A typical ‘curry and rice’ dinner at a guesthouse could include mango curry, pumpkin curry, banana curry, beetroot curry, dhal curry, okra curry, eggplant curry and bean curry as well as coconut sambol, chilli sambol and gotukola sambol (pennywort salad). The fish we had was usually cooked with a hefty amount of black pepper.

The meal’s an overload of fluorescent colour and fragrance, with the crisp bite of okra, beans and beetroot, creamy, mustardy plantain (cooking bananas), sweet, rich mango and twice-cooked eggplant.

For a girl who grew up with meat and three veg, there was too much on the plate to digest let alone describe, so I signed the group up to a cooking class at a little place called Matey Hut in Ella.

Our teacher Madu welcomed us like a woman who’s used to complete incompetence in the kitchen. We burnt our pumpkin powder (a mix of rice, cumin, cinnamon, curry leaves and coconut), butchered our coconuts (grinding right through the flesh and into the shell) and overcooked our poppadoms.

Unfazed, Madu focused on the essential ingredients of the Sri Lankan kitchen: chilli flakes, turmeric, roasted and unroasted curry powder, roasted chilli and unroasted chilli, curry leaves, fenugreek, pepper, mustard, cinnamon and cloves. Most of the curries used chilli, garlic, onion and curry leaves as a base and, where necessary, the pumpkin powder as a thickener and as a seasoning.

Her top tip was to always make coconut milk from scratch by adding a cup of hot water to a bowl of grated coconut and squeezing it by hand to extract the milk. Her recipe for coconut sambol is the best we tried in Sri Lanka; fiery hot, zesty and with heaps of crunch.

We know not everyone is lolling away December, drinking tea in anticipation of re-entering the real world, so we’ve smuggled Madu’s coconut sambol recipe home. May you all be as calm in the kitchen as Madu this Christmas.

Put the chilli powder, fresh and dried chillies, peppercorns, shallots and curry leaves into a mortar and pestle and work into a rough paste. Add the coconut, tomato and lime and mix well by hand.