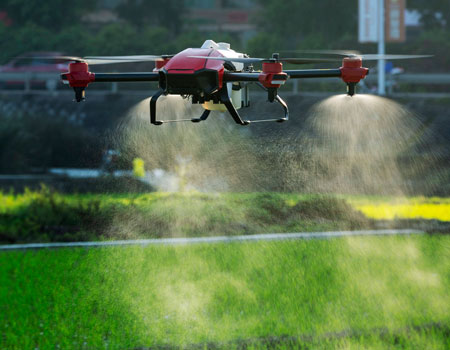 BEIJING -- China's XAG, a smaller rival of drone maker DJI Technology, said it will accelerate expansion in key foreign markets including Japan, South Korea and Australia as it sees opportunity in raising productivity in the farming industry, which faces an acute labor shortage.

In a recent interview with the Nikkei Asian Review, XAG co-founder Justin Gong said he expects sales from abroad to grow to half the group's revenue from the current one-fifth over the next two to three years. The company, whose core business is developing drones and drone technology for agricultural purposes, partnered with German pharmaceutical Bayer in 2018 to break into Japan and had planned to open 100 service locations in Australia this year.

The Japan Coast Guard plans to stop using Chinese-made drones due to security concerns, a move that could weigh on peers led by DJI. However, XAG sees continued opportunity in foreign commercial markets.

Last week, XAG unveiled an unmanned utility vehicle, the R80 JetSprayer, for use in farms in hope of diversifying from its core drone business to raise its profile as an agriculture technology company.

With the new product launch, the Guangzhou-based company aims to attract not only customers in China but also in Japan, South Korea and Australia. XAG is about to open an office in Singapore adding to the one it already has in Hyogo Prefecture, Japan, Gong said.

Sales of agricultural and forestry drones in China are likely to hit 20 billion yuan ($2.9 billion) by 2025, according to consultancy iiMedia Research, which did not specify the current value of the market.

XAG is now considered a leader in China's burgeoning agritech industry, a field that is drawing interest from Chinese tech investors such as Alibaba Group Holding, as well as strong support from the government.

Peng said many investors initially associated the agriculture sector with the state and stayed away from it. But it managed to convince investors and was able to commence Series C funding earlier this year after raising more than $100 million in 2014 and 2016. XAG won't disclose its market value, except to say that it had been profitable since 2018.

Rival maker DJI is the leader in the unmanned aerial vehicle sector, which had a global market value of $14 billion in 2018, according to Research and Markets. That sector is projected to grow to over $43 billion by 2024.

XAG not only faces Shenzhen-based DJI, which controls two-thirds of the global commercial drone sector, it also counts as a rival Ehang, maker of autonomous air taxis that debuted on Nasdaq weeks ago.

To diversify its business, XAG tied up with France's Airbus to test food delivery using drones recently, which it said was an attempt to keep pace with "changing demands."

XAG's new R80 JetSprayer is an autonomous driving vehicle that can traverse rough terrain to spray pesticides, carry farm produce of up to 80 kg and collect digital data. It can be operated by remote control and an app, and is expected to roll off the company's production lines in April for the domestic market before hitting markets abroad. XAG now sells drones in over 30 countries.

The vehicle costs 34,999 yuan ($5,000) for the domestic market. XAG is able to produce 60,000 units annually. It is cheaper than the company's drones, which require a longer process to clear regulatory requirements abroad.

XAG also recently introduced XSAS, a product management software that analyzes crop production processes: cultivating, seeding, growth monitoring and harvest. Through data collected from the company's aerial vehicle and other devices, users can choose the best practice for cropping, cutting down pesticides by 30% and watering by 90% through precise spraying, claimed XAG.

XAG recently completed the largest defoliation of a million hectares of cotton trees in the western Chinese province of Xinjiang using drones. The use of drones improves yields and prevents crop damage of up to 19,200 yuan per 65 hectares using conventional methods.

XAG said it has transformed the protection of a variety of crops in some 20 million hectares. Even so, farmers and investors remain suspicious of the company's technologies.

"Nobody believed us in 2015 when we said we are an agriculture technology company," said the 37-year-old Peng, whose parents were farmers in Fujian, a province known for tea plantations. "Even now, some of our customers in rural areas have the poorest industry knowledge, often expecting extra services for free," he said.

Apart from educating the sector and investors, Peng said it was also XAG's mission to get more young people interested in agriculture.