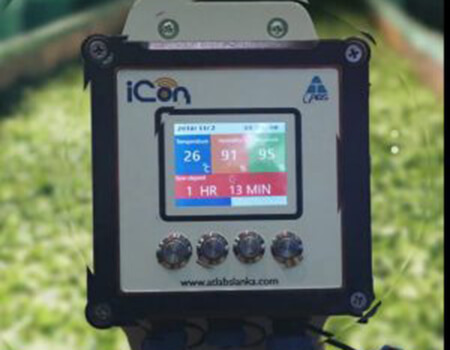 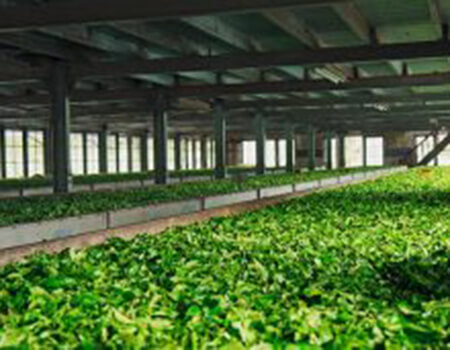 The quality of Ceylon Tea is well known throughout the world, and has made the product one of the country’s biggest export items. This has given rise to a vast tea industry in the country, making it one of the best in the region.

However, industry professionals still strive to introduce more efficient and cost-effective methodologies to the manufacturing processes; the latest in these is the automation of the tea withering process.

Tea withering is considered the first and most important unit operation in a tea factory as it has a direct impact on the quality of the end product. A good-quality and precise withering process is an essential element in the processing of tea leaves as it ensures the healthy development of aroma and flavour compounds in the leaves.

However, the current process consumes 49-61% of the total electricity used by a factory, along with a lot of time and labour, the latter of which is prone to result in manual processing errors.

The Tea Research Institute of Sri Lanka (TRI) has partnered with A & T Labs to provide tea manufacturers a better option, one that not only helps save 40% of the energy consumed during the process, but also ensures optimum withering of the leaves.

“In the manufacturing of black tea, withering is considered the most important process, in order to produce good-quality black tea. This (new) automation is completely different from even what other countries are attempting. It helps the process by letting the leaves achieve optimal withering and saves energy in the process,” said TRI Director Dr. Saman Hettiarachchi, speaking to The Sunday Morning Business.

These automatic tea withering controllers are set to save tea manufactures a lot of money. Research done by the TRI shows that a factory which produces 40,000 kg per month can save up to Rs. 100,0000 annually.

The project is the brainchild of the former Deputy Director – Research of the TRI, Dr. W.S. Botheju, who did his PhD on the automation of the tea withering process.

He stated that he has identified the withering process to be the most important process in tea manufacturing, as it helps reduce the moisture content of green leaves by about 55%. This process uses machinery called troughs, which use thermal energy to produce steam and electrical energy to rotate huge fans.

Dr. Botheju stated that while the cost of thermal energy is bearable for most factories, as they mostly use firewood, the cost of electrical energy is fairly high. This is because withering takes around 12-14 hours to complete.

He explained that due to this, large factories with around 24 troughs consumer really high amounts of energy, with the withering process being the highest electrical energy consumer, compared to other processes like fermentation.

In order to control the huge motors in the troughs, the TRI initially developed a device called the VSD (variable speed drive) in 2002. Dr. Botheju explained that these devices can control motors between the capacity of 5-15 horsepower, depending on the size of the troughs. This was perfect for the tea industry as most factories use motors of a 10 horsepower capacity.

VSDs were able to control the speed of the fans in the troughs, depending on the extent of withering on the leaves, and according to Dr. Botheju, this drastically reduced the consumption of energy. However, these VSDs had to be operated manually, leaving room for human error.

“Sometimes, employees may forget to control the speed at the right time, which will eliminate the advantage we seek from the VSD – reduction of electricity consumption and the good quality of withering.”

Due to this, Dr. Botheju stated that the TRI decided to develop an automated computer programme in order to control the speed of the VSD, depending on the wither percentage or degree of wither.

He explained that they built the first prototype for a factory owned by the TRI itself, and it is still working. However, as it was a prototype, the product was bulky and not ideal for commercialisation.

Dr. Botheju stated that they had to partner with A & T Labs in a commercial partnership in order to make a smaller and more appealing unit before marketing it to factories.

This new unit comes with several extra advantages outside of size, as it is easier to control, estimates a more accurate withering percentage based on airflow control, controls the temperature, and can be connected to a smartphone for more efficiency.

However, he stated that in order to make optimal use of the device, factories need to supply it with enough hot air.

According to the engineer in charge of the project from A & T Labs, Anuruddha Tennakoon, the TRI signed an MoU (memorandum of understanding) with the company in order to deploy the product to other factories in Sri Lanka.

The cost of the device depends on how many troughs each factory has, as it will usually cost Rs. 150,000 per trough. Tennakoon also stated that the factories will have to already have VSD controllers installed.

The product is set to be showcased to industry stakeholders in a TRI symposium which will be held in the next couple of months. The research on the product has already been sent to several industry forums in the country in order to garner interest.

“The approach we have taken is unique to Sri Lanka. Other countries have adopted simple, easy, and sometimes erroneous solutions to tea leaf withering. The TRI approach is much more efficient,” said Dr. Hettiarachchi.