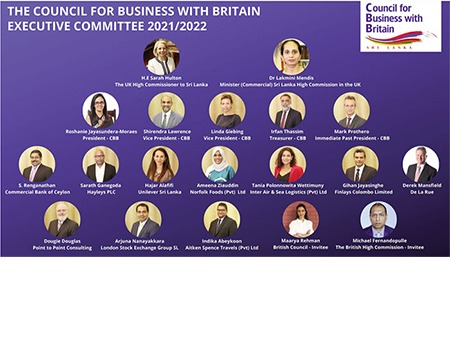 feaRoshanie Jayasundera-Moraes, Executive Vice President of John Keells Holdings, was re-elected as President of the CBB of the Ceylon Chamber of Commerce at a virtually held AGM on 20 July 2021.

Addressing the membership, she called for policy stability in order to facilitate business, build confidence among investors and attract FDI. She also called for a negotiation of an FTA between the UK and SL post Brexit.

“Sri Lanka provides significant opportunities for British companies looking to access larger South Asian markets that have some of the fastest growing economies as well as sizeable populations. In order to facilitate this, we are fully aware that SL needs to improve its ranking on the Ease of Doing Business Index and it’s encouraging to know that our policy makers have made this a priority. We look forward to these developments and also volunteer to support the process in whatever way we can, at least in the UK-SL trade corridor,” she stated.

Over the past year, CBB has actively organised several business events such as investor forums, and webinars. It also gained membership to the British Chambers of Commerce, adding value to its members by enabling access over 60 British Chambers globally.

Dr Lakmini Mendis, Minister (Commercial), Sri Lanka High Commission in the UK said: “2020 was a challenging year for businesses. This compelled businesses to be more resilient and innovative while driving them to explore new markets. However, it’s been a remarkable year as total trade exceeded US$ 1 Billion, despite the pandemic. Apparel, comprising 70% of the export basket to the UK, was adversely affected but picked up later along with products such as rubber gloves, food items, coconut products, seafood, herbal teas, etc., stressing the importance of export diversification. In 2020 April we experienced a dip but increased sharply to record high growth in July, August, September, and October exceeding the figures of 2019. Brexit was another challenge we successfully overcame. Many representations and presentations were made by this Mission to the UK DIT in London. With their support Sri Lanka received similar market access as the EU for exports to the UK under the enhanced preferential scheme. During 2020, CBB, CCC, SL High Commission in London, British High Commission in Sri Lanka and DIT in collaboration promoted trade and investment. A stronger bilateral trade agreement is anticipated, noting that UK is our second largest export market.”