Home>Publications & Articles>Articles>Media Articles>Can Tea Help You Breathe Easier if You Have Asthma? Plus 7 Teas Worth Trying

Can Tea Help You Breathe Easier if You Have Asthma? Plus 7 Teas Worth Trying 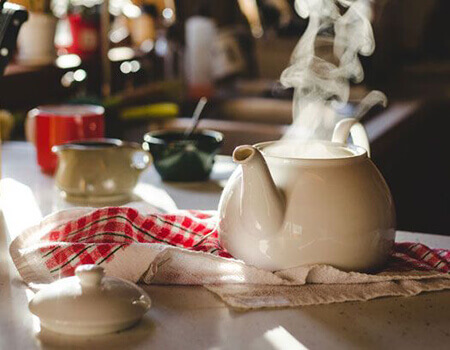 The caffeine in black and green teas can modestly improve lung function, researchers say, while patients often claim that herbal teas like ginger and licorice make a difference.

A giant mug of hot tea seems to have endless healing benefits, from soothing an upset stomach to boosting mood, but can it help with respiratory diseases like asthma? The internet seems to think so: Plug “teas for asthma” into a search engine and you’ll find thousands of results hyping tea after tea for better-functioning lungs.

Researchers, like the scientists behind a review published in the Journal of Allergy and Clinical Immunology, have acknowledged dozens of different herbs and natural substances that have been used for centuries around the globe, sometimes in tea form, to support respiratory health.

Yet very few scientists have investigated whether natural remedies really help people with asthma. As for research looking specifically at tea and asthma, “I haven’t been able to find a single study,” says John Mark, MD, clinical professor of pediatric pulmonary medicine at Stanford University in California.

Clearly teas can’t replace daily maintenance or rescue asthma medication, but experts agree there’s virtually no harm in adding certain teas to your routine. “All types of cultures have used teas like licorice, eucalyptus, and ginger for respiratory symptoms, and we haven’t seen people having adverse reactions to them,” says Dr. Mark.

The Caffeine and Asthma Connection

There is one component of certain tea varieties that has been studied for its respiratory effects: caffeine.

According to Karina Keogh, MD, a pulmonologist with the Mayo Clinic in Rochester, Minnesota, caffeine may help relax smooth muscles, like those in the lungs, and act as a bronchodilator, helping open airways.

In fact, caffeine shares some similarities with a drug called theophylline, used to treat asthma for years before the development of the drugs primarily utilized today, says Dr. Keogh.

Though caffeine’s impact on lung function seems to be modest, research has identified it as legitimate. One prior study published in the Cochrane Database of Systematic Reviews, for example, concluded, “Caffeine appears to improve airways function modestly in people with asthma for up to four hours.”

The study found that even a low dose of caffeine had a noticeable impact on asthma patients’ performance in lung function tests, starting with amounts as low as 5 milligrams (mg) of caffeine per 1 kilogram of body weight. (That’s about 340 mg of caffeine for a 150-pound person.)

But although the researchers considered 340 mg to be a “low” dose of caffeine, that’s around three 8-ounce (oz) cups of coffee or seven cups of black tea — which may not feel so low to some people.

The researchers note that while caffeine may mildly improve short-term lung function, more evidence is needed to understand whether this small improvement is associated with a better quality of life, and to see how caffeine tolerance changes this impact over time.

That said, Keogh and other experts believe that asthmatics should avoid caffeinated drinks for several hours prior to pulmonary function testing in order to avoid skewing results.

7 Teas That May Help With Your Asthma

If you’re experiencing mild asthma symptoms or notice that a minor illness, like a cold, or exposure to fog or pollution have made your lungs a little more sensitive or tighter than usual, try two or three cups of tea throughout the day and see if it helps, Mark suggests. (Again, this is in addition to your usual medication.)

Mark recommends selecting a reputable brand of tea like Numi, Buddha Teas, or Traditional Medicinals to ensure your mug contains the highest-quality ingredients.

Made from licorice root, this sweet-tasting tea has long been used as a remedy for lung ailments like asthma.

According to Mark, licorice makes saliva thicken and triggers mucus production, which can gently coat and soothe airways. This effect is especially helpful when a nagging cough threatens to trigger asthma symptoms.

A caveat: When used long-term, licorice can raise blood pressure. Mark recommends looking for a tea labeled DGL (deglycyrrhizinated licorice), indicating that the blood pressure-raising compound has been removed.

“Ginger tea has been used for centuries for asthma and we believe its potential benefits have to do with its anti-inflammatory properties,” says Mark, who suggests ginger may help relax the smooth muscles in lungs.

Eucalyptus has long been thought to have a muscle-relaxing effect, which is why it’s used in airway-opening rubs and salves. Some people with irritable bowel issues even utilize it to soothe their digestive tracts. In this same way, eucalyptus tea may have an anti-spasmodic (muscle-easing) effect on lungs and support easier breathing.

Just note that if you have reflux issues, eucalyptus tea can exacerbate symptoms by relaxing the muscles that prevent gastric acid from creeping up the lower esophagus.

Peppermint works like eucalyptus, says Mark: While it may open airways, it can backfire on people with reflux.

Another herb traditionally considered to be an anti-spasmodic, fennel might provide some lung relief when taken in tea form, Mark says.

Green tea, which typically contains about 27 mg of caffeine per 8 oz serving, may be worth trying if you’re looking to reap the mild respiratory benefits of caffeine.

Black tea, which can contain closer to 50 mg of caffeine per 8 oz serving, may also offer some modest benefits for drinkers looking to temporarily improve lung function.