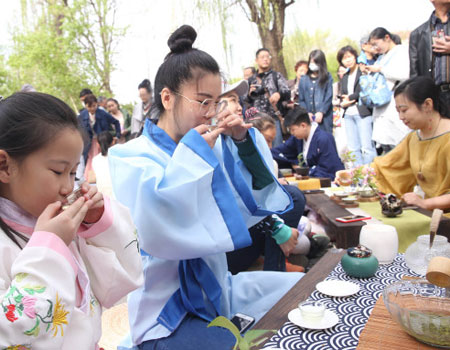 BBC Studios has won its first fully-funded commission in China – a six-part factual series about tea. The production division of the British public broadcaster is making One Cup, A Thousand Stories for China Mobile’s digital content subsidiary Migu.

One Cup, A Thousand Stories will tell the story of tea and its impact on China and other civilizations around the world. It will look at tea on a scale never attempted before, journeying across the beautiful and varied landscapes of China to explore its many teas, the people who have built a life around it and the culture it has created. It will reveal how tea has influenced Chinese lifestyles and rituals, including food and concepts of medicine and health and how tea sits at the heart of Chinese traditions, attitudes, friendships and family ties, bringing different generations together and even the nation. The series will also seek to tell the story of tea’s influence on other countries and China’s role in the global tea culture.

BBC Studios has long partnered with Chinese broadcasters on natural history series such as Blue Planet, Planet Earth and Dynasties, but this is the first fully financed series to emerge from the country. It has been led by the BBC Studios Factual production team, which has increased its presence in China, working closely with Kelvin Yau, SVP and GM, Greater China, BBC Studios, to explore opportunities. The six-part series will be produced by BBC Studios in Scotland.

Lisa Opie, Managing Director for BBC Studios Productions said, “I am delighted that we have secured our first production commission in China and will be making this fascinating and ambitious factual series for Migu. It’s incredibly exciting to be sharing our story-telling and production craft with new audiences and with content that has been specifically developed for this market.”

Bin Wang, CEO of Migu Video added, “BBC Studios Productions makes some of the best factual programs in the world and we are thrilled that they are producing this landmark series for us. It is a great opportunity to draw on their production skills and knowledge, covering a subject that is so important to us.”

The commissions come as the company unveiled its first financial results since the merger between the production division, BBC Studios, and its international distribution unit BBC Worldwide.

Overall revenue fell slightly to £1.37B but profit from its production and distribution group more than doubled from £34M to £81M. This came as it scored 15 commissions from third party broadcasters – the first time that BBC Studios was allowed to produce for non-BBC channels. These include The Red List for Discovery, Royal Wedding Watch for PBS, Fatberg Autopsy for Channel 4, The Bermuda Triangle Enigma for Channel 5 and Sex, Knives and Liposuction for UKTV’s W.

The company also crowed about its forthcoming slate including 8 Days: To the Moon and Back, The Left Behind, Seven Worlds, One Planet, Earth’s Sacred Wonders and We Hunt Together.

Meanwhile, the public broadcaster touted a falling gender pay gap in its own annual report. The publicly-funded body revealed that its gender pay gap fell from 7.6% to 6.7% over the last twelve months. It also revealed that three female presenters made it into the top ten of top paid presenters. Strictly Come Dancing host Claudia Winkleman and radio presents Zoe Ball and Vanessa Feltz broke into the top ten, led by Match of the Day host Gary Lineker.