June 21, Colombo: Kingdom of Bahrain, the rich Gulf country impressed by Sri Lanka's diverse and high-quality range of locally made exportable products is seeking to partner its investors with the local industries, Minister of Industry and Commerce Rishad Bathiudeen said. 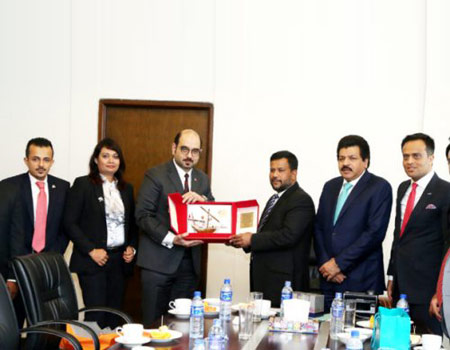 Bahrain -the gateway to multi-billion Gulf market has called Sri Lanka's products to be "viable investment opportunities for partnering."

"Specific Sri Lankan industrial product lines such as organic food, beverages and specialty jewellery are of high quality and premium value. There are great potentials for them in Manama and in Bahraini markets" said the Managing Director of Bahrain's Al Jaberiya Group Mohammed Sajid when he met with Minister Bathiudeen on Tuesday (19) in Colombo.

Al Jaberiya's Sajid, leading a seven-member Bahraini business delegation to Colombo held discussions with the Minister of Industry and Commerce.

The Island Kingdom of Bahrain, known as the Heart of Gulf, has strong and historic logistical connectivity in the region and is considered as the best gateway to the $1.5 trillion Gulf market.

"Our main import from Sri Lanka is Ceylon Tea. However, when we arrived here we found a bigger array of special high-quality products beyond Tea" said Al Jaberiya's Sajid.

Sajid, who is also the Chairman of GCC Gold and Jewellery Association in Manama, said the Sri Lankan jewellery designers have grabbed his attention due to their high skills world class output.

Bahrain is also a major employer of Sri Lankans in the Gulf employing nearly 6000 skilled and unskilled Sri Lankans in labor and professional service sectors in Bahrain.

The Minister pointed out that the bilateral trade between the two countries is below $30 million and has great potential to improve.

"During my meeting with Bahraini Minister of Industry, Commerce, and Tourism His Zayed bin Rashid Al-Zayani during my February 2016 visit I stressed that the two countries have not yet exploited and have not taken the strategic advantage of the enormous economic, commercial, touristic, outsourcing and investment opportunities and the natural endowments, with which Minister Al-Zavani too agreed," Minister Bathiudeen said.

Minister Bathiudeen called on the delegation to focus on the three FTAs that Sri Lanka has-with India, Pakistan and Singapore -and leverage from them by setting up in Sri Lanka and said his ministry will extend fullest cooperation to Bahraini importers and investors coming to Sri Lanka.