Guwahati: Apeejay Tea, which has 17 gardens in Assam, has instituted awards to honour skilled pluckers. 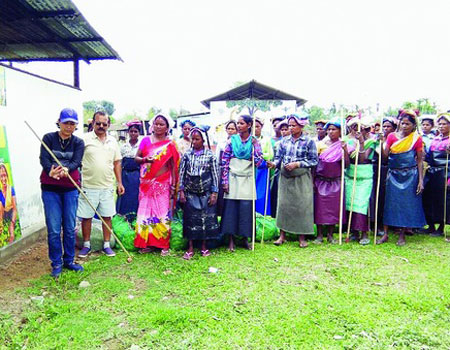 Plucking is the most labour-intensive field operation in tea plantations and contributes considerably to the profitability of gardens. A well-balanced plucking policy enhances yield and optimises labour use without affecting the quality of tea. Experts say plucking is a skilled process and requires good hand and eye coordination, dexterity, accuracy, focus and speed.

Ramakrishna Ghosh, general manager, human resources, Apeejay Tea, said, "Special awards have been instituted because we believe that recognition of the hard work and skills of our over 21,000 people, almost all of them remarkable women, is essential."

He said the best pluckers would be rewarded in each of the 45 divisions that comprise Apeejay Tea's 17 estates four times a year through the Best Plucker Award. At the end of a season, Apeejay Tea will reward the best of the best with the Champion of the Season award. The Best Plucker awardee will be identified every 60 days in both permanent and casual categories, in the 45 divisions. The first Best Plucker awards will be given in first week of June for the April-May plucking period, the second in August for the June-July period, the third in October for the August-September period and the fourth in December for the October-November plucking period.

All the awards will be cash rewards, accompanied by a certificate for the Best Pluckers and a trophy for the champion of the season.

The Champion of the Season awards will be decided after finalising the last Best Plucker Award. Champion pluckers will be felicitated in a special ceremony along with their families.

"A uniform approach of awarding best pluckers, division-wise and not estate-wise, has been opted for because it covers efforts of the maximum number of people," Ghosh said.

"The understanding of the physiology of tea shoot by our people is why great tea is made in the field. The appreciation will, henceforth, be applied as a policy across the company's estates," he added.