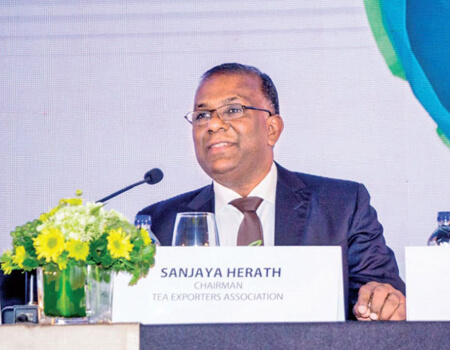 The Chairman of the Tea Exporters Association Sanjaya Herath yesterday advocated that the Colombo Tea Auction should be automated like in other tea producing and exporting countries such as India and Kenya.

“The use of technology is important in both the tea manufacturing and export sectors. The automation of the Colombo Tea Auction should be done as soon as possible, which should slash the procurement costs for the exporters, Herath told Daily News Finance.

Herath who is also the Vice Chairman of the Colombo Tea Traders Association and a Director of Uniworld Teas ( Pvt) Ltd said that automating the Colombo Tea Auction would be time saving, transparent and most importantly such a move would benefit both the buyers and sellers.

The sustainability of tea industry largely depends on to what extent Sri Lanka can retain the international demand for its tea. The consumer oriented marketing is the norm for survival of any industry whether it is managed by corporate sector or small holder farmers.

“If there is no global demand for Sri Lanka tea the industry cannot survive or sustain for a long period. It is also important to be a reliable supplier of tea to the world market in order to command better prices.”

However, the declining trend in Sri Lanka tea production is a matter of concern for all stakeholders. After achieving the highest production figure of 340 million kg of tea in 2013, the country has failed to maintain the same momentum in the subsequent years.

According to the latest production figures released by Sri Lanka Tea Board, the annual tea production has declined to 300.1 million kg last year compared to 303.9 million kg in 2018. The low replanting level, impact of climate change etc could have been main reasons for decline in tea production but the concerning factor is that Sri Lanka is losing its clout on the world tea market with the decline of her share in the global tea production.

“Sri Lanka should examine the global demand for Ceylon Tea during the last few decades to determine whether demand for Sri Lanka tea has increased, it is stable or whether it has declined,” he said.