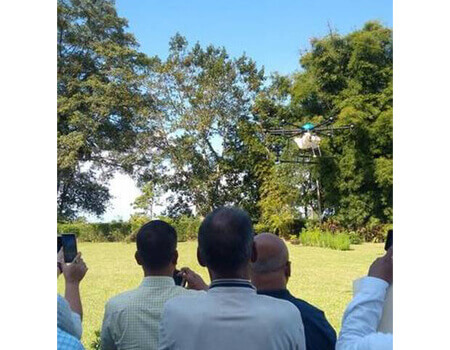 Drones can address shortage of labour as well as spray hazardous pesticides.

The leaves in your cup of tea could soon be plucked by a pair of robot-assisted hands.

India’s oldest tea company has begun the process of deploying artificial intelligence (AI) to help take the industry to a sustainable future from its ‘past perfect’ present state.

Investing in robotic drones for precision treatment of a diseased tea bush and implanting molecular markers in leaves to develop traits for mass production will not lead to retrenchment, insisted the Assam Company India Limited (ACIL), which has depended on labourers for 180 years.

The “embrace” of cutting-edge technology in the labour-intensive industry is aimed more at dealing with a shortage of farmhands and ensuring a scenario where workers find it more remunerative to return to the plantations, said officials of the 180-year-old company.

There are challenges in replicating the AI, deployed in farming in developed nations, for use in the tea sector, industry officials said.

“We have the technology to implant molecular or genetic markers in plants but tea is a new area for us,” said Avital Tractitman of Israel’s SMX, one of several global AI firms engaged by ACIL for a pilot project.

Such markers control the genes of a plant for developing resistance to pests and diseases, improving the quality and quantity of the yield.

“We have been involved in similar projects in Asia where AI has uplifted lives of the workers besides maximising production efficiencies,” said Nataraj Balasubramanian of U.S.-based Smart Farms. “For tea plantations, we are working on two types of drones — one that analyses plant health, soil conditions and other natural factors and the other that sprays fertilisers or targets pests from 6-8 ft with precision so that other bushes are not affected,” he added.

Tea Board chairman Prabhat Bezbaruah is hoping technology would help add value to the tea industry that is currently going through a “bad patch” because of falling prices, rising cost of production and aged tea bushes.

“We are looking at technology for taking care of cancer and tuberculosis-causing jobs such as spraying of fertilizers and pesticides but not as a replacement of the workers who would be absorbed in other jobs,” said B.R. Shetty, the Dubai-based chairman of BRS Ventures, which took over ACIL in 2018. Bringing technology and innovation will not impact the lives of the 26,000 farmers across our 14 estates,” he asserted.

ACIL has since made a comeback of sorts with the handmade golden tea from its Maijan Tea Estate fetching a record ₹70,501 per kilogram at the auction in August.

Dr. Shetty said the bigger goal behind the pilot project on AI was to go beyond ACIL’s tea estates and touch lives in every plantation across India through technology such as tracking the plucker of the best teas for transferring to her account a share of the price as reward.

“We plan to provide the expertise to other estates free of cost. As the first in the business, it is the responsibility of the Assam Company to overcome the crisis,” he added.