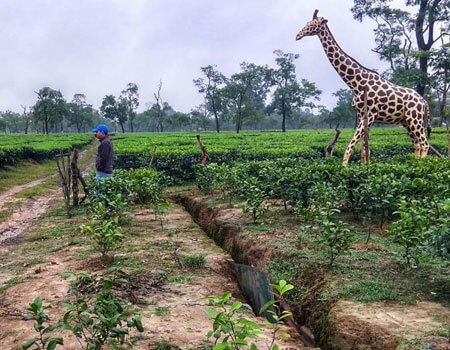 Faced with an onslaught from wild elephants, a tea estate in Assam’s Golaghat district has put up life size models of giraffes in a bid to keep the jumbos at bay.

“We have installed three giraffes made of fiber in our tea estate last week as a measure to protect our crops from elephants,” said Utpal Goswami, the manager at the Dolaguri Tea Estate in Golaghat’s Letekujan area.

Wild elephants are frequent visitors to this over 700 hectare tea estate which is close to the Nambor-Doigrung Wildlife Sanctuary. Local conservationists point out that the tea estate is on the route used by the elephants to get to the paddy fields.

“Elephants visit at least two three times a week. While they haven’t harmed humans, they destroy the crop,” said Goswami.

The management had earlier complained to the local forest officials about the issue, before it decided to invest in giraffes.

“They cost Rs 50,000 each. We got them made at Sonapur (on the outskirts of Guwahati),” Goswami said.

R Phukon, the Secretary General of the Tuskers Task Force, a local NGO in Golaghat said he noticed an interesting pattern in the movement of the elephants when they noticed these giraffes.

“This morning we saw that a herd of 50-60 elephants changed its path when they saw this life size dummy giraffe,” Phukon said.

“It is a psychological barrier for a short term. They are highly intelligent animals. They will figure it out in a few days,” said Bhaskar Deka, Divisional Forest Officer, Golaghat as he explained the only way to minimise conflict in the area is if the tea estates were to create small plantations and wetlands in their premises where the elephants could take shelter.

Human-elephant conflict toll crossed 1,000 in Assam since 2010 with 761 human casualties and 249 elephant deaths according to data placed in state Assembly in February this year.