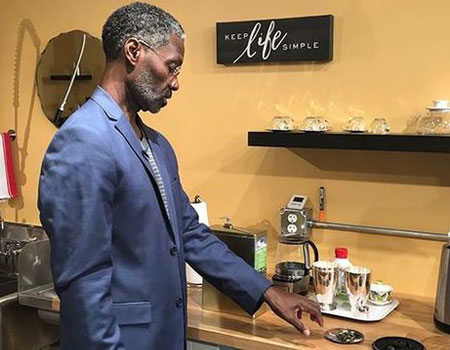 SAVANNAH, Ga. (WSAV) - Many know the health benefits of green tea, but one Savannah man says the herbal drink has proven its healing powers in his mother's fight with breast cancer.

Ashford Tea Company owner Wayne Ashford is brewing up the beverage downtown. It’s something he says he’s been involved with since he was a kid.

“My mother introduced me to it and when I got older I started researching more and found there was more to tea than just Lipton and Nestea,” Ashford added.

And while science has yet to prove it, Ashford believes tea helped save his mother’s life.

"With green tea, it is loaded with a substance with an antioxidant substance called polyphenols.

Polyphenols are the things that help fight they call it an anti-cancer so it lowers those percentages of those cancer cells what I call igniting so to speak,” he explained.

Ashford’s mom Hattie is a huge tea drinker. In 2016, she was diagnosed with breast cancer at the age of 83.

"They found a lump on her right breast. My mother is a very active 85-year-old, 83 at the time,” Ashford said. “She's a gardener. She does the aerobic exercises 3 times a week. It was kind of a surprise."

Hattie elected to do hormone therapy, meaning no chemotherapy and no radiation was involved in her treatment.

“And to this point now, she’s cancer-free,” Ashford said, adding, "Along with the tea, I think it all was an accumulation of helping her fight this disease when she was diagnosed."

Since tea plays a major role in his family's journey, Ashford is raising his cup to healthy education with tea and table conversations.

"It's all connected with what we eat, what we drink, how we feel about ourselves and our outlook of life,” he said.

St. Joseph’s/Candler Oncology Dietitian Hayley Cleaver says they promote green tea for those who want to drink it.

“The compounds EGCG and polyphenols do indeed have promising research to show prevention for breast cancer,” Cleaver added.

Ashford said his mother had her mammogram a couple of months ago and everything was normal.

To learn more about Ashford Tea Company and the health benefits of tea, visit their website here.