Around the world on an art project for charity

No, they are not playing a game but into the serious and passionate business of helping children across the world. Founder Filip Cederholm Agoo and wife, Fia, of the ‘ABC Charity’ are travelling the world to create the first human alphabet with children in different countries.

“This is the world’s largest art project for charity,” says Filip about this Swedish non-profit empowerment organization, just before creating the ‘J’, the 10th letter of the alphabet, on Tuesday with 500 children amidst the lush green tea carpets that swaddle the highs and lows of Dilmah’s picturesque Dunkeld estate on the banks of the Castlereagh reservoir, 20km from Hatton. 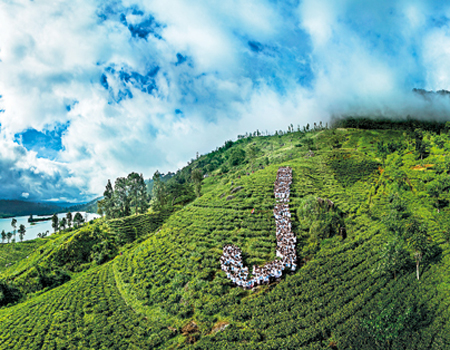 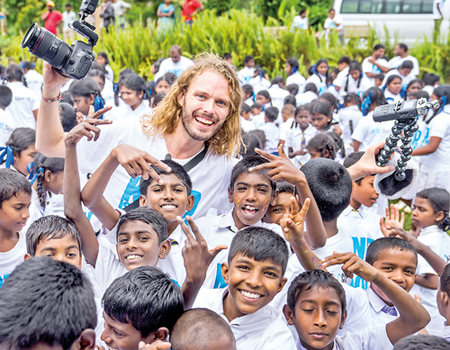 Of Tuesday, Filip is ecstatic: “It was absolutely amazing and we did the best picture ever for ABC Charity, I am so happy. It is unbelievable that for the first time after weeks of rain, the sun came out the whole day and made it a beautiful experience for the children.”

‘J’ follows hot on the heels of the other nine all with spectacular backdrops – ‘A’ in South Africa (just outside Cape Town with 490 children); ‘B’ in Namibia (in the desert with 500); ‘C’ in Sweden (amidst the canola fields of Trelleborg with 540); ‘D’ in Germany (with the Alps on the horizon in Fussen with 440); ‘E’ in the Dominican Republic (on the beach in Punta Cana with 500); ‘F’ in Croatia (at Omis with the Adriatic Ocean as the backdrop with 330); ‘G’ in Thailand (facing the limestone mountains of Krabi with 500); ‘H’ in Norway (amidst the cold stark beauty of Lofoten with 390) and ‘I’ in India (at the base of the Himalayas alongside the Ganges river in Uttarakhand with 432), just before Sri Lanka.

Under this project, Filip and Fia create “inspiring” events for thousands of children around the globe, working with the children as well as local communities, sponsors and ambassadors, to form the different letters of the alphabet in exotic locations, which are then photographed from an aerial view. This is the limited edition ‘photo art’ that is sold on the ABC Charity web-shop to benefit local and global charities supporting children.

Sporting a T-shirt with ‘Kind is the new cool’ which is also distributed to the children, Filip stresses that 100% of the revenue after print and transaction fees are covered, is forwarded to a charity – it could be an international one or one of five especially-selected charities in that specific country — of the buyers’ choice. DHL has chipped in to ship the photo art to the buyer free of charge anywhere in the world, while the ABC Charity charges zero for services due to contributions from their pro-bono partners. The photo art prices range from US$ 220 to 11,000.

Explaining how they gather the kids, Filip says that once they pick the “perfect” location which can accommodate 500 children safely to take the picture, they connect with local and nearby schools and charities. The logistics can be both physically and mentally harrowing.

Smilingly conceding that the biggest challenge is to find the location, he explains that ABC Charity also tries to give less-privileged children a chance to have a little enjoyment in life. Empowerment workshops are conducted with singing and interactive activities and every child gets a free ABC Charity T-shirt, while they are also able to enjoy the luxury of visiting a special place, like in the Dominican Republic where children had never had access to the beach due to posh hotels being there, though they lived a stone’s throw away.

“The whole idea of the human alphabet is to bring kids closer from all around the world, privileged, underprivileged, despite different political and religious backgrounds — the next generation on the planet to support each other,” he says simply.

The action and messages being promoted by ABC Charity revolve round ‘Kids helping kids’ and ‘Kind is the new cool’.

Before his foray into charity, 40-year-old Filip was a photographer, working on top advertising campaigns featuring celebrities for brands which he defines as “advertisy, punchy and fake,” in other words dealing with “ego-based satisfaction”.

The doubts about what he was doing began gnawing at his conscience. “What is my social responsibility in a world where depression and anorexia are rife? What’s my footprint and contribution to society? What am I creating? What values am I putting out and where are they coming from,” Filip asked himself.

With the hope of making a difference, he was looking for ideas and spending his time studying eastern philosophy, Buddhism, yoga, the teachings of the Dalai Lama, Mahatma Gandhi and the contribution of these greats to the world.

The alphabet idea to use his expert skills struck him in May 2009. There has been no turning back.

For the ‘J’, Filip and Fia arrived in Sri Lanka on April 10 and contacted MJF Charitable Foundation (the philanthropic arm of Dilmah Ceylon Tea Services and Resplendent Ceylon) as Fia had been drinking Dilmah tea for 15 years.

As Filip and Fia start thinking of their next location, Greenland, they are hoping to introduce photo books for schools where children can learn the alphabet through these human-made letters and also become familiar with the peoples of the world.

Even though they have achieved a lot — created events for 3,000 children and raised US$10,000, Filip is realistic. “There is a long way to go before we are able to finish the alphabet,” he says.

“I want to see the amount of money I could give away when I’m sleeping. You get up in the morning and make a cup of tea, refresh the computer and see how much money you have made for children while you were sleeping. It’s a great feeling,” he adds, while the accolades are flowing in.

Among those who have paid tribute are New York Rangers Hockey Goalie, Henry Lundqvist, who says, “What I love about ABC Charity is that it’s kids helping kids”, and anti-apartheid crusader and human rights activist Archbishop Desmond Tutu who adds: “A very important project.”

What more ‘branding’ is required for ABC Charity!