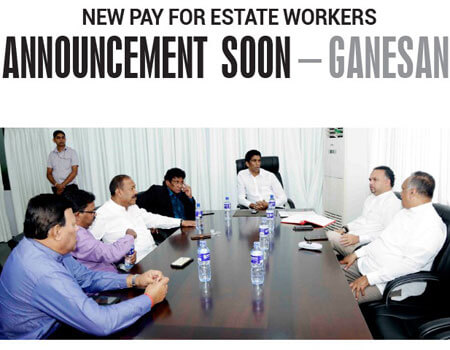 Minister of National Integration, Official Languages, Social Progress and Hindu Religious Affairs and Leader of the Tamil Progressive Alliance (TPA) Mano Ganesan said that they had held discussions with the Government regarding the unresolved basic pay demand of the estate workers and very soon they will announce the new pay tabled for them.

He said that a discussion between the TPA, Minister of Plantations Naveen Dissanayake and Minister of Labour and Trade Union Relations Raveendra Samaraweera, under the purview of the Prime Minister, had ended successfully.

He noted that it is not only about their wages but also to bring about reforms to the plantation sector which they consider they need right now.

The meeting was held at Minister of Hill Country New Villages, Infrastructure and Community Development Palani Digambaram’s Ministry where they came to a conclusion regarding a better pay and also to introduce reforms for the plantation industry and its workers.

“We think we have reached a solution for all with a proper increment.” He went on to say that the Collective Agreement signed recently only could see a Rs 20 increase in the basic pay demand and it could lead to several issues when the workers rejected it.

Then the TPA came forward to pressurise the Government to resolve the problem and reach a point that the new salary per day would be announced during the budget.

The Minister did not reveal the pay hike but noted it that would be soon revealed.

He also noted that the new pay hike would be announced and included in the salary for the month of February too.

“We have been dragging this matter causing inconvenience to the workers. We want this issue to end. With the pay hike and reforms brought in therein, the plantation sector will have a better future,” he said.

Earlier, the TPA Members warned the Government that they would walk out if the salary demand by the workers was not resolved.