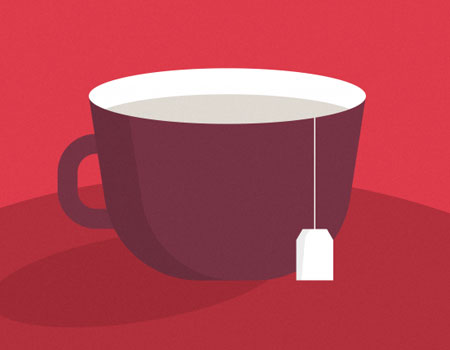 Gut microbiota. Kombucha. Epigenetic changes in women. These are just a few of the topics that were discussed at the Global Tea Initiative (GTI) for the Study of Tea Culture and Science‘s fourth annual colloquium held on Jan. 24, 2019. The theme for this year’s conference was “Body, Mind, Spirit: Issues Surrounding Tea & Health,” featuring speakers from Hong Kong, Sweden and Japan in addition to UC Davis faculty.

According to Katharine Burnett, an associate professor of art history and the founding director of the GTI, the colloquium changes every year, but what made this year’s program unique was the involvement of more members from the tea industry. A morning session was dedicated to UC Davis students where they could listen to a panel of experts and learn about internships within the field. In addition, the event’s partners and sponsors from the tea industry hosted tea tastings for attendants to sample.

The afternoon portion of the program was filled with various academic talks given by professors and members of the tea industry. One of these speakers was Ping Chung Leung, an emeritus professor from the Chinese University of Hong Kong, who spoke about the scientific values of tea and how to enhance such values. He stated that one single plant could be made into a healthy beverage with various flavors and clinical values just by changing the way the tea is processed.

“I hope people would be more aware of the true value of tea and start comparing tea with coffee, and realize that all aspects of tea, health support, commercial value, etc., have been underlooked,” Leung said.

Her main area of research being gut microbiology, Yu-Jui Yvonne Wan, a professor and vice chair for research for the department of pathology and laboratory medicine, decided to look into EGCG, a polyphenol abundantly found in tea. Upon further research, Wan delved into how this supplement can shift the gut microbiota and subsequently our metabolism. While she stated that tea is often labeled as an antioxidant, she hopes that people will better understand how it can also shift our microbiota and, in turn, benefit our health.

“When we eat, definitely eat healthy, eat a balanced diet,” Wan said. “Everybody understands that, but then the underlying mechanism is we should eat to feed gut bacteria and find out what kind of food bacteria usually like and to support healthy bacteria to grow. So we don’t want to feed ourselves, we want to feed the gut microorganism [that] live in the guts.”

Weronica Ek, a researcher in the department of immunology, genetics and pathology at Uppsala University, focused more on how tea consumption could lead to epigenetics changes that could potentially prevent diseases. By participating in the colloquium, Ek stated that she gained a broader awareness on various aspects of tea, ranging from its form as an enjoyable hot beverage to its cultural and social aspects.

While the GTI is now an initiative endorsed by the UC Davis administration, the seed of this project was Burnett’s interest in tea pots. On being appointed director of the East Asian studies program on campus, Burnett had been striving to raise the profile of the program and came across an opportunity to apply for a research grant which would allow the humanities and arts to be brought together with the scientific field. Through this opportunity, Burnett met up with Darrell Corti, the owner and proprietor of Corti Brothers, and brought along her tea pots because of their prior conversation.

This conversation led to the creation of All Things Tea, a faculty research cluster consisting of 12 faculty and librarians, which transformed over time into becoming the GTI. This initiative is now transitioning into becoming the Global Tea Initiative for the Study of Tea Culture and Science which will be the world’s first and only comprehensive research institute to study tea in its entirety through all dimensions and disciplines, according to the GTI website. The GTI also began spreading their influence throughout campus, offering a first-year seminar on global tea culture and science, and developing a curriculum for an undergraduate minor in the field. The GTI is also discussing possible research partnerships globally, which would open up possibilities for research collaborations and student and teaching exchanges.

Burnett stated that while there is a lot of information published about tea, much of it is anecdotal or a myth. Burnett also pointed out the need for these statements to be scientifically proven. Aside from the scientific aspect of tea, she also finds the cultural and societal aspects of it to be very important such as its ability to bring people together.

“It’s been fascinating to me to see how important local tea cultures are to people and how people, wherever you are, think that their tea culture is the best,” Burnett said. “Well, I think that’s wonderful. And it’s wonderful because then you can have a conversation and between people who may think that are very different, but discover that as much as their practices may appear superficially different, they really share more than they can anticipate.”

As a research scholar, Burnett stated that tea opens up new ways of thinking about culture at varying levels, from elite to day-to-day. Catherine Nguyen, a research analyst and industry liaison of the GTI, stated that while she didn’t initially know much about tea, she gained a lot of new knowledge by working with the project.

Continuing their annual tradition, the GTI will be host a two-day symposium on Jan. 16 and 17 of 2020 in collaboration with the Robert Mondavi Institute for Wine and Food Sciences. The event’s theme is based on a Tang Dynasty text from the eighth century where “Mr. Wine” and “Mr. Tea” debate their respective benefits. Burnett stated that while each have their own cultural and agricultural components that make them distinct, the two beverages also have similarities that bring out their special properties. She suggested thinking about tea and wine in similar ways, such as examining flavor, aroma, connoisseurship, chemistry and mixology.

“[Because of] this debate that tea and wine have always been brought together as comparatives […] and because they’re so many remarkable similarities between these two beverages even though one has alcohol and the other doesn’t, but there are very interesting ways of thinking of them that I think, that we think will help people better understand each and shed light on each in ways that we aren’t accustomed to thinking about them,” Burnett said.