A tea trail through the mists of time 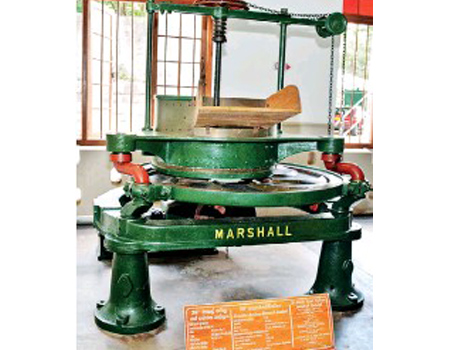 Nestled in Hantana, overlooking the Knuckles mountain range, the Ceylon Tea Museum is just four kilometres away from Kandy City. The location is significant as Hantana is one of the first areas where tea cultivation was successfully started after the failure of coffee plantation. The old Hantana Tea Factory built in 1925 was revamped into the museum which displays old machinery, documents, books, photographs and historical objects related to the tea industry.

The Ceylon Tea Museum was opened to the public on December 1, 2001. At present, the museum consists of four floors. The ground floor houses old machinery including the iconic “Little Giant Tea Roller” -a hand operated tea roller over a hundred years old. The first Tea Drier made by W & J Jackson called the Venetian Drier made in 1880 is a special item on display here.

Somewhat to the middle of the ground floor lies a miniature model of a tea factory that shows how tea is processed in a tea factory.

Padma Iddamalgoda, Assistant Manager of the Ceylon Tea Museum enthusiastically explains each intricate detail of its functions, guiding both local and foreign visitors.

A seedling tea bush which is 80 years old stands next to a Vegetative Propagated (VP) tea tree. While many Sri Lankans are familiar with the vegetative tree that dominates many hills, and other places in the country, the seedling tea bush is something that is no longer seen in Sri Lankan tea cultivation.

The father of Ceylon TeaJames Taylor is given a lot of importance in the museum. In the second floor we venture into a room dedicated to James Taylor’s life and works. A life-sized figure of the man, faded newspaper clippings, old photographs and some of his personal belongings are on display. “If the fairies came to tea, how very jolly that would be, they’d say “Hullo”, I’d say “Come in”. And then the fun would all begin,” was written on a porcelain plate used by him, giving us a glimpse of his personality and inherent love of tea.

The oldest known Ceylon Tea packet, 70 years old, is a unique exhibit displayed at the museum. The one-pound pack of Broken Orange Pekoe (BOP) is guaranteed by the Ceylon Tea Propaganda Board. Printed on the back of the packet is a step by step description of how to make tea, revealing a time when people were unfamiliar with tea as a beverage.

The second floor also features a library with books and historical documents on the Ceylon tea industry. “Foreign visitors come to the library looking for their ancestral history linked with Ceylon tea,” says the Assistant Manager.

A collection of tea artefacts of boilers, ceramic teapots, teacups, kettles and Russian samovars donated by people is also on display. In addition, Sir Thomas Lipton’s involvement in Sri Lanka is also displayed in a corner of the museum, with newspaper articles published during that era.

The fourth floor has a tea tasting unit which gives visitors the opportunity to sample different types of tea and and purchase any tea they like. It is also a perfect spot to enjoy the panoramic view of the hills while enjoying a free cup of tea provided to every visitor. In addition there is a telescope where on clear days you can see the Knuckles mountain range.

“We want to make the Ceylon Tea Museum, popular among the general public,” says the Assistant Manager. The Ceylon Tea Museum is open to the public from Tuesdays to Saturdays from 8.30 a.m. to 3.45 p.m. and Sundays from 8.30 a.m. to 3 p.m. It is closed on Mondays and Poya days. Entrance tickets are priced at Rs 100 for Sri Lankans (Rs. 20 for children) and Rs. 800 for foreigners (Rs. 400 for children).