A saga of grit and ingenuity 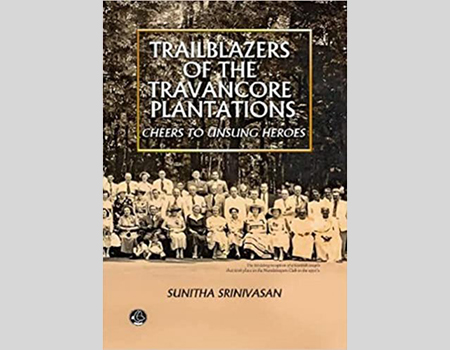 Human intervention in ecologically sensitive Western Ghats has been a subject of intense debate among environmentalists and climate activists. Amidst the raging controversy, here is a new work that sings paeans about the pioneer planters who transformed the inaccessible verdant hills of Central Travancore from dense jungle to teeming tea and rubber plantations, braving wild animals and malaria. The early tea planters were almost all British, many of them sturdy former army men. Their arrival was linked to the British strategy to break the Chinese monopoly on tea. Tourists who inhale the pleasant smell of the tea leaves as they amble along extensive tea plantations may not be aware of how this inhospitable terrain was tamed a century ago.

In Trailblazers of the Travancore Plantations: Cheers to Unsung Heroes, Sunitha Srinivasan tells the story of life in the plantations in Peerumade and Vandiperiyar areas of the Idukki district of Kerala. At the turn of the 20th century, the area, inhabited by primitive tribesmen, was uncultivated. The first Englishman to set foot on the hills was Rev Henry Baker in 1848. A few years later the then king of Travancore granted the Baker family the right to grow tea plantations in Peerumade. The mist-covered hills with salubrious climate enticed many more fellow Englishmen. Some never went back. Many British and Scottish planters played key roles in the evolution of plantations to the present state and the development of the area as a tourist hub.

The book fills a void as very little history is available on this plantation area. Sunitha, who grew up in a tea estate, personally knew many of the persons depicted. The reader is taken to a bygone era with a way of life totally unlike today’s. It is a saga of grit, perseverance, and ingenuity; and a planter’s life is lonely and hard.

The vignettes of planters’ lives are vivid and delightful. Early planters were excellent crisis managers. Tennis courts, a golf course, planters’ club, and churches helped recreate a home environment and break the monotony of life in the remote tea plantations spread across vast tracts. The sprawling estates were generally self-contained. In the early days, the workers’ living conditions were extremely dangerous with many perishing due to malaria, floods, and elephant attacks.

Every chapter features an individual, family, or incident that had influenced the evolution of the plantations. Characters portrayed included planters and self-effacing cooks and bearers. The characters may not be famous people but their contributions far outweigh their stature. It is through anecdotes that life in the plantations comes alive. Col Andy Spence kept an eye on his workforce by removing his glass eye from the socket and placing it strategically to face workers who thought the eye was watching them. Taylor tapped solar energy for his domestic use much before electricity reached the hills. Among the early Indian planters profiled are members of the Kallivayalil family. The family’s role in establishing educational institutions and health facilities is phenomenal.

It is true that anecdotes and stories bring history to life. But anecdotes alone can’t make a historical narrative. A serious reader is bound to be disappointed as only nuggets of history are on offer. The economic angle is totally missing and references on workers’ roles are sketchy.

The author has missed an opportunity to present a complete story. Nevertheless, the volume has an old-world charm and is a good read.