On a pretty beach at Koggala, south-east Sri Lanka, Rob Forkan said suddenly: “This is where we were; the bay around the corner.” 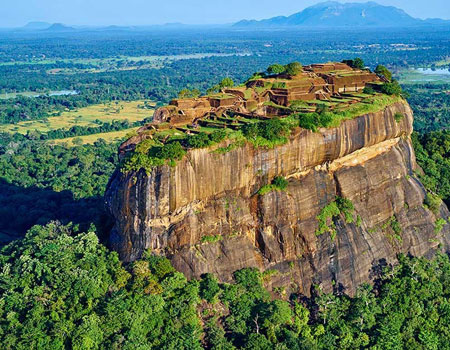 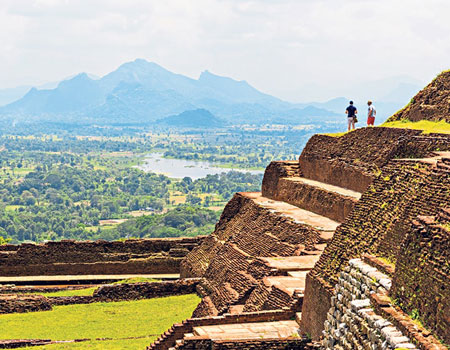 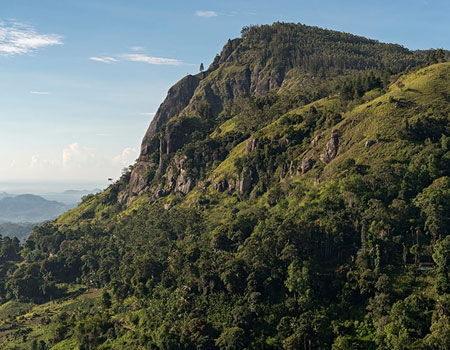 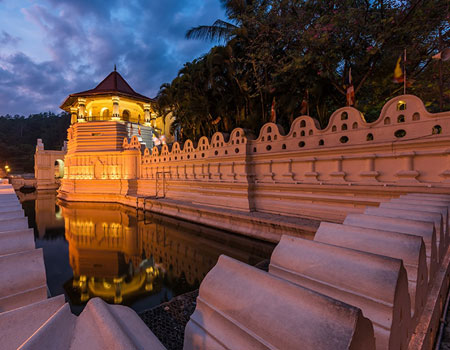 I’m ashamed to admit I was momentarily thrown. To the casual holidaymaker – me, scrunching sand between my toes – Koggala appeared just another Sinhalese Shangri-La. Palm trees swayed. Fishermen posed on stilted seats. Where you were when, I wondered?

Over the previous week in Sri Lanka, Rob and his brother Paul, co-founders of travel lifestyle brand Gandys, had been perfect travel companions: insightful, generous, fun. After intrepid childhoods with parents who’d fled Croydon for Goa, India, this probably felt like home from home.

A beat later I understood. This was the coast on which Rob (then aged 17) and Paul (15) took the impromptu family trip that changed everything. It was Christmas 2004.

“I felt it before it hit,” Rob writes in the brothers’ book, Tsunami Kids. “The world shook in the seconds before it bore down on us with the full force of nature.” The tsunami that struck Sri Lanka on Boxing Day killed 23,321 people, among them the brothers’ parents.

The boys were traumatised and alone, but astonishingly they – plus two younger siblings – managed to hitchhike to the Sri Lankan capital Colombo before returning to the UK. Their upbringing helped – for the three years previously they’d lived in Goa – but so, too, did Sri Lankans.

The brothers did not forget the kindness shown to them, and out of their harrowing experience eight years later, in 2012, they founded Gandys, a company through which 250,000 pairs of flip-flops were sold to fund a school for disadvantaged children near Colombo. A universal product solving a universal problem, Paul told me. A charity initiative, Orphans for Orphans, followed.

From unimaginable horror has come not just Gandys’ astonishing story but hope. Rob said: “[After the tsunami] we had no shoes. We were young kids running up the train tracks, trying to get back to Colombo after the loss of our parents. Now we’re back helping other children by selling flip-flops. It feels like we’ve come full circle.”

It’s an inspirational tale. A bit like that of Sri Lanka itself.

Don’t mention a forthcoming trip to anyone who’s been. Not if you’re in a hurry. They’ll burble on about the beguiling landscapes and fantastical temples and misty hill towns, the wildlife and sizzling food and, above all, the smiley, gentle people. You’ll nod, perhaps roll your eyes afterwards, then discover it’s all true.

Yet if Sri Lanka itself is heavenly it has a history from hell, plundered by the Portuguese, Dutch and especially British for 450 years then, until 2009, riven by 26 years of civil war that left an estimated 100,000 dead. Plus there was the tsunami.

Now tour operator Kuoni has teamed up with Gandys to create a bespoke tour of Sri Lanka based loosely on Rob and Paul’s intrepid backstory, and including favourite sights and beaches. For everyone who books the tour, Kuoni will donate £50 to the Gandy Foundation charity. That doesn’t sound much until you visit a project and learn how far that goes (see panel).

A win-win for the companies, then. Can it deliver as a holiday?

My trip started in the Cultural Triangle three hours from Colombo. Enough time for a doze, I thought. Sri Lanka had other ideas. 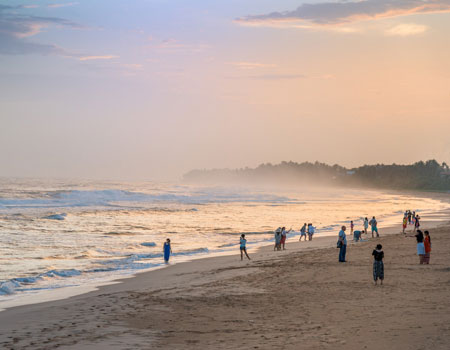 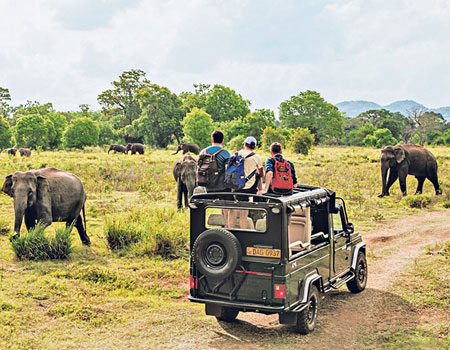 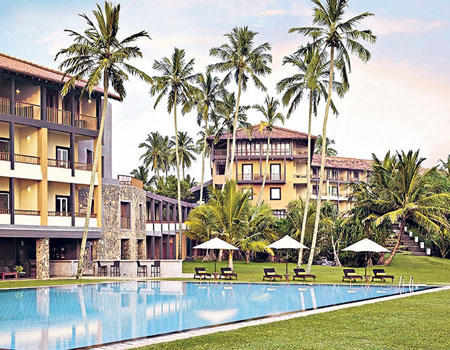 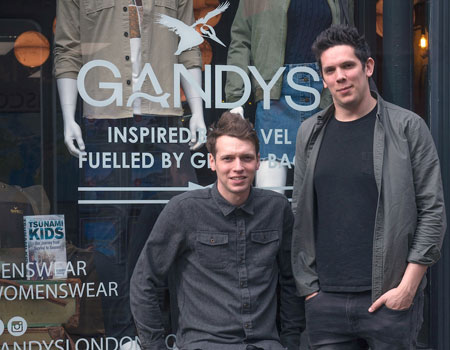 Insanely photogenic images slipped past: squawking rickshaws and Brahman cows; gold Buddhas on jungle hillsides and carnivals of gods on Hindu temples; kites in cobalt skies above acid-green rice fields; a magnificently tusked elephant – on a flatbed truck. The explanation that it was a prize “tusker” – a genetic rarity near-eradicated by colonial hunters – heading to a temple festival couldn’t dim the wonder.

I was heading to Sigiriya, the country’s Unesco-listed poster site. Beyond ancient moats once filled with crocodiles, past royal bathing pools and fountains that still spouted after heavy rain, it appeared: a ruined fifth-century citadel on a magma plug like a wedding cake. You knew it was coming yet it still looked like a fantasy.

This was King Kasyapa’s redoubt after the murder that bagged him the throne; a patricide committed, they say, when his father revealed his fabled treasure to be vast reservoirs, not gold. Still, there were worse places for a god-king to hunker down. Frescoes depicted his harem – 500 bejewelled women with pneumatic breasts – and the view from 660ft was a belter. Silver lakes shimmered on heat-hazed plains.

Kandy is Sri Lanka’s other cultural big-hitter. The former capital is famous for its lakeside Temple of the Tooth. Buddha’s, supposedly, but you won’t see it nor much of the gilded temple you’re whisked through so fast.

Kandy is also where Sinhalese royalty capitulated to the British in 1815. The colonisers set about reshaping the island. In Nuwara Eliya, located in highlands that rise above the coast like a pith helmet, they created a nostalgic England: one of Asia’s first golf clubs (its motto the golfer’s plea “Spero meliora” – I hope for better things) and a mock Tudor post office. Sri Lankans love “Little England” for the same reason as the tweedy colonials – its cooler climate.

I preferred their Ceylon tea estates nearby. As bright as kingfishers among bushes that fuzzed slope after slope, Tamil women earn around £4.50 a day by plucking 20kg (40lb) of young leaves. It’s too dexterous work for men, who are. relegated to pruning.

You have to taste it, obviously. Tea has a terroir: malty and strong if grown below 2,500ft, fragrant and refined above 4,000ft. That makes the stuff up here at 6,000ft as good as it gets. Most estates have a shop and café – experts recommend the Broken Orange Pekoe. I stayed at Heritance Tea Factory hotel, built from a Victorian plant where, surrounded by old teak and porters in colonial khakis, you can sample blends at a Tea Bar. Just don’t request milk. My barman looked appalled.

No such niceties at Ella. I thought I might be too old for a backpacker hill-town with bars named Chill. I wasn’t, not when there were hilltop hotels like 98 Acres, and diversions to lend purpose to languid days: a cave temple here (“Please maintain discipline”, the sign tutted), a hike up Little Adam’s Peak there.

When the folks back home enthused about wildlife they probably meant Yala National Park. Cinnamon Wild Yala hotel promised excitement, and not just because there were crocodiles in the lake near its pool. Like unruly adolescents, elephants loafed around the grounds most nights. A sign offered tips on what to do if charged. “Dropping a torch could earn you vital seconds as the elephant might stop to investigate,” it said. Then: “Or it might not.” In which case “run even faster”.

At a glance | Orphans for Orphans

The irony of Gandys’ Orphans for Orphans education initiative is that Rob and Paul Forkan have one GSCE between them. Rob said: “We had our parents to educate us [in Goa]. In Third World countries education is everything. If you don’t have it you don’t get anywhere.”

In the Kids Campus schools set up by the charity in Sri Lanka, Malawi and, soon, Brazil, that means disadvantaged children benefit from extra tuition in maths, literacy, science and English.

I visited the Kids Campus in Sri Lanka as Rob and Paul opened a new storey paid for by Gandys. It was inspirational: enthusiastic children despite the simple classrooms.

Richer children got a head start through better schools, founder Mamma Tina said. By contrast her children were often withheld if parents were asked to contribute just 200 rupees (95p). That was why Gandys’ aid was so transformational.

“These children come from single-parent or no-parent families. They may not have enough food or clothes,” she said. “But they can achieve as much as any of us. They just need help to get there.”

Yet Sri Lanka’s most famous park was more stock-car derby than safari. Too many Jeeps chasing too few leopards. Cajole your guide into visiting quiet bits, or opt for Minneriya National Park instead. Remember those ancient treasured reservoirs? Because the one at Minneriya holds water year-round, it has hosted “The Gathering” of elephants for centuries.

On my visit, they had arrived by the herd; more than 250 flapped their ears and waved their trunks and wallowed and gambolled over the grassland.

Final stop Galle was as brilliant in its way, a fortified Dutch town with shiny Morris Minors in the streets and jewellers in the mouldering mansions.

Galle was also my springboard to nearby beaches. Unawatuna was a gorgeous ribbon of pale sand. Koggala had those stilt fishermen. I got chatting to one dressed in a floppy hat and salt-bleached sarong.

For three hours each dawn Dannish sat on the same stilt as his father and grandfather (“No, not uncomfortable for me, sir”) to catch around 130 tiddlers. After that he charged tourists a couple of quid for the classic photo op.

“Fishing is not so good after the tsunami,” he explained. It washed away everything: livelihoods, people, communities. “We rebuilt the village together.” Then, as a Chinese tour bus pulled up: “Many rich fish! You bring me luck, sir!”

Natural disasters are cruel. There’s no reckoning, no one to blame. Yet they also inspire strangers to help rebuild lives; not just those with a connection like Rob and Paul but, if we aspire to, people like you and me.

There on Koggala beach, Rob said: “Our parents told us that it’s more important to help one person than no one at all. You come to this beautiful country and your eyes open. You see our lives are really not that bad. We really can help.”

James Stewart was a guest of Kuoni (01306 747008). A 10-night, bespoke tour of Sri Lanka inspired by Gandys costs from £3,136 per person, including flights from Heathrow, half-board accommodation in four-star hotels, transport and guide, and entry fees. Ten per cent of all Gandys profits benefits Orphans for Orphans.