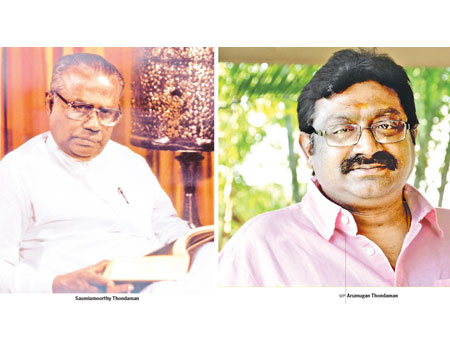 The Ceylon Workers Congress (CWC) enters its 80th anniversary today. It has played a dominant role in the economic development and political arena of Sri Lanka. It is the biggest and most representative trade union in the plantation sector in Sri Lanka. It is also a political party which wields much political power having elected members in Parliament, Provincial Councils, Pradeshiya Sabhas and other local bodies.

The precursor to the Ceylon Workers Congress was the Ceylon Indian Congress which was formed on July 25, 1939, by Pandit Jawaharlal Nehru who came to Sri Lanka (then Ceylon) as a special Representative of Mahatma Gandhi. Its history dates back to the arrival of South Indian labour to Sri Lanka to work in coffee and later in tea and rubber plantations of the then British Sterling Companies.

The first convention of the Ceylon Indian Congress was held in September, 1940 in Gampola at which the late Saumiamoorthy Thondaman made the welcome speech and stressed the need of a strong organisation to protect the interests of the persons of Indian origin in Ceylon.

A separate trade union called Ceylon Indian Congress Labour Union was formed in 1940 consequent to the refusal of the estate managements to negotiate on labour disputes with the Ceylon Indian Congress which was a political organization. The existence of these two organisations under different leadership created problems in the Indian community.

Consequently, Saumiamoorthy Thondaman became the President of Ceylon Indian Congress and the Ceylon Indian Congress Labour Union at the convention held in 1945 in Nawalapitiya after a keen contest with Abdul Aziz. Having taken over the presidency of both organizations Saumiamoorthy Thondaman actively involved in safeguarding the workers as well as the interests of the Indian community in Sri Lanka.

While the Ceylon Indian Congress concentrated on major political issues of the Indian origin people in Sri Lanka such as disenfranchisement reducing them as ‘stateless’ in 1948, the Congress Labour Union fought to secure the rights and protection of plantation workers.

The Ceylon Labour Union launched several strikes commencing in 1940 to protect workers’ rights and oppression by the British employers. A historical and the first strike launched by the Ceylon Labour Union was the strike at Urulavalli Estate in Bulathkohupitiya in which 353 workers were fined Rs.1000 each or face three-month imprisonment where Saumiamoorthy Thondaman had to mortgage his private property and pay the fine and release the workers.

Following this, several strikes were launched in Mooloya, Kandahena, High Forest, Wanarajah, Kelebokka, St. James, Montecristo, Kadiyanlena and St. Clair to win over workers’ rights. In the strike in Mooloya Estate, a worker called Govindan was shot dead and he was probably the first plantation worker to lay down his life to fight against British Raj’s oppression, suppression and freedom of expression.

The disenfranchisement of Indian Tamils in 1948 was a major issue for the Congress Labour Union which became the Ceylon Workers Congress subsequently. The Indian and Pakistani Citizenship Act though attempted to satisfy this vacuum, it did not result in any major success.

The continued struggle of the Ceylon Workers Congress under the leadership of Saumiamoorthy Thondaman resulted in the form of granting citizenship rights to the disenfranchised Indian population initially under the Sirima – Shastri Pact followed by subsequent amendments to Citizenship Acts. President Ranasinghe Premadasa further amended the Citizenship Act to grant citizenship rights to all Indian origin people merely on signing an affidavit. This saw the end of the obnoxious terms ‘stateless persons’ being used especially to plantation workers. Consequently, they all regained citizenship rights and voting rights.

The Ceylon Workers Congress had contacts with Indian leaders, international trade unions and federations which helped the CWC in dealing with the governments on issues relating to Indian origin people. The presidency of the South Asian Regional Trade Union Council (SARTUC) by late Saumiamoorthy Thondaman, strong ties with ITUC Regional Organisation for Asia and Pacific (ITUC – AP) and International Labour Organization (ILO) were a big boon for the CWC’s trade union success in this country.

The Ceylon Workers Congress is the main trade union along with the Lanka Jathika Estate Workers Union (LJEWU) and the Joint Plantation Trade Union Centre (JPTUC) (except in 2019) involved in signing the collective agreements with the Employers’ Federation of Ceylon (EFC) as regard the wages of workers in tea and rubber plantations in regional plantation companies. It is to be noted that the last two collective agreements were signed after much struggle by the CWC.

The Ceylon Workers Congress has become a strong political force in the plantations having representation in Parliament, Provincial Councils, Pradeshiya Sabhas and other local bodies. It is significant that the Ceylon Workers Congress is having control over seven Pradeshiya Sabhas whose Chairmen are members of the CWC. The Hatton – Dickoya Urban Council is also headed by a CWC nominee.

Having won the political struggle, the CWC in later years concentrated on education, housing, health and on entering the mainstream of the society under the mantle of the present President Arumugan Thondaman M.P. During his long tenure as a Cabinet Minister, mainly holding the portfolio of the Estate Infrastructure, he was able to develop the lives of plantation workers. As a result, the plantation community has witnessed progress in infrastructure, education, social welfare, housing and culture.

We wish and pray that the Ceylon Workers Congress will continue to play a dominant role in country’s unity, national integration and economic development especially shaping the lives of the plantation community and Indian origin Tamils in Sri Lanka.