Home>Publications & Articles>Articles>Media Articles>5 benefits of green tea and how it can help your memory, skin, and bones

5 benefits of green tea and how it can help your memory, skin, and bones 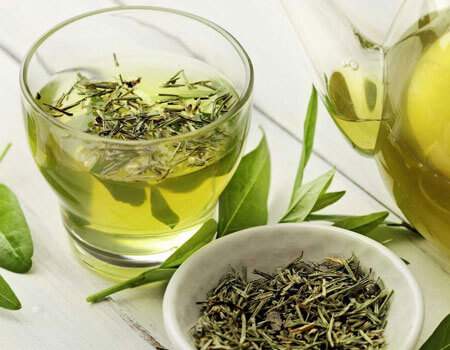 Green tea is a type of tea made from steaming, pan-frying, and drying the leaves of the Camellia sinensis plant. It's one of the most popular beverages consumed worldwide and has been used for thousands of years.

In fact, green tea is thought to have many health benefits for those who drink it regularly. Here are five possible benefits of green tea and how to incorporate it into your diet.

One of the main ingredients in green tea is caffeine. Caffeine can block a chemical messenger in the brain called adenosine, which controls when you feel sleepy or awake. Blocking adenosine can prevent drowsiness, which is why so many people use caffeine to stay awake and mentally sharp.

An overproduction of adenosine in the brain has also been linked to cognitive conditions like Alzheimer's and Parkinson's. Research shows that regular consumption of caffeine may reduce the risk of developing these conditions.

The amount of caffeine in green tea is much lower than in coffee, so you can get some of the benefits of caffeine without the unpleasant side effects, like jitteriness.

Green tea also contains an amino acid called L-theanine, which has been found to help reduce stress and boost your mood. Research shows that the combination of caffeine and L-theanine improves brain function by strengthening working memory and attention, and reducing anxiety.

Green tea has been found to play a role in heart health by reducing the risk factors that cause heart disease.

A large 2006 study also showed that people who consumed six or more cups of green tea day, compared to those who consumed less than one a week, were 33% less likely to develop type 2 diabetes.

Moreover, a very large long-term study published in 2020 followed two groups who had no history of heart disease. The first group was made up of people who drank green tea more than three times a week, and the second group was made up of people who never drank green tea, or didn't drink it habitually. In a follow up about seven years after the start of the study, scientists found that those who drank tea regularly were likely to have 1.4 more years free of coronary artery disease at the average age of 50, than those who didn't.

Catechin is a major component of green tea. Catechins are natural antioxidants that have antioxidative, anti-inflammatory, and anti-hypertensive effects. They lower cholesterol levels by decreasing the absorption of cholesterol into the body.

An 2011 analysis of 14 studies showed that drinking an average of two cups of green tea per day for 10 years resulted in significant reductions in LDL cholesterol levels. LDL cholesterol is also known as bad cholesterol, because it can cause plaque buildup in your arteries, which increases your risk of getting a heart attack or a stroke.

"Some clinical research does show that drinking green tea or using green tea extracts can lower total cholesterol, LDL cholesterol, and increase levels of HDL cholesterol (good cholesterol). The mechanism for this isn't well-defined, though one theory is that epigallocatechin gallate (ECGC), a compound of green tea, affects the circulation of bile acids, which helps to regulate cholesterol," says Ring.

Green tea also helps to keep your bones healthy and strong. Research shows that it may help treat and prevent osteoporosis, a condition that makes your bones weaker and more prone to fractures.

"Tea leaves contain fluoride, which might slow osteoporosis, as well as beneficial compounds such as flavonoids and phytoestrogens," Ring says. Flavonoids are and phytoestrogens are plant chemicals that can strengthen bone formation and prevent the breakdown of bone tissue.

In a 2017 study, 171 postmenopausal women with weak bones and low bone mass were put into four groups. The results of the study showed that the group of women who were given compounds derived from green tea experienced a notable improvement in their bone health.

A 2009 study also concluded that green tea may benefit bone health, after examining bone-forming cells. The researchers exposed the cells to epigallocatechin (EGC), gallocatechin (GC), and gallocatechin gallate (GCG), which are all main components of green tea. After several days, they observed that EGC promoted bone growth by up to 79%. They also observed that high concentrations of EGC disrupted the activity of osteoclast, a cell that weakens bones.

Drinking green tea — or using it topically — has many benefits for your skin.

Green tea has also been shown to have anti-aging properties. A small 2005 study studied the effects of using oral supplements and applying green tea topically on aging skin for 8 weeks. Researchers found that the combination of using green tea topically and orally in the participants caused an improvement in the skin's elasticity.

Green tea comes in different forms, but to enjoy the optimal benefits of tea, it's best to drink it plain. Some research suggests that adding milk may counteract some of the health benefits of drinking tea.

It's important to note that green tea contains caffeine, so if you have a caffeine sensitivity, you might want to consume it in smaller amounts.