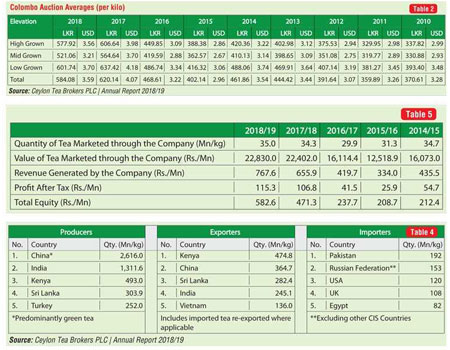 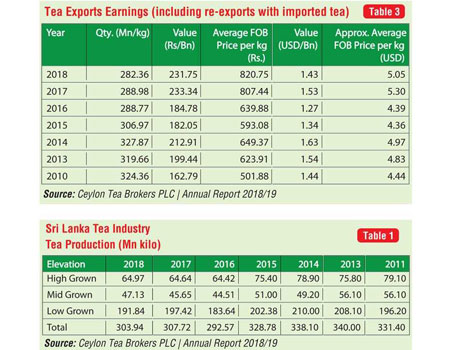 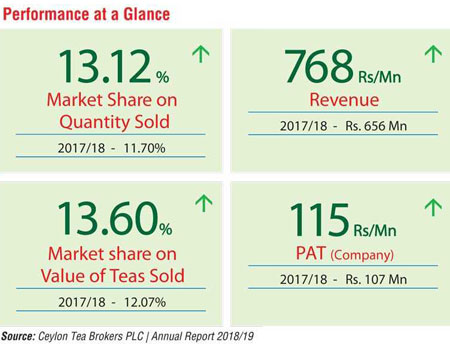 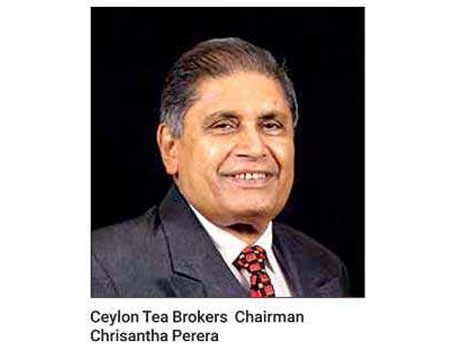 This view was shared by Perera in the Chairman's Review of the Ceylon Tea Brokers PLC 2018/19 Annual Report.

He notes that barring the Russian Federation and other CIS countries, Sri Lanka does not have a significant presence in any of the top five tea importing countries. A further significant factor is that Sri Lanka’s tea exports to Russia, Iran and UAE in 2018 have apparently recorded lower volumes than the corresponding exports out of India reversing the trend of previous years.

According to Perera, the encouraging feature in Sri Lanka's export league is China, where the export volumes in 2018 have exceeded 10 million kilos and continues on an increasing trend.

"If one were to analyse the emerging global scenario, China could be established as not only the largest producer, but also the exporter of the tea and therefore Sri Lanka’s gradually strengthening presence in this market should be further developed," he said. (Table 4)

"We hope the commencement of the long anticipated global promotional campaign for ‘Ceylon Tea’ in the near future would result in reversing our declining presence in the global tea market thus consolidating our status in the existing markets as well as make inroads into the large and constantly growing tea importing countries in which we presently have a minimal presence," pointed out the Ceylon Tea Brokers Chairman.

He said global consumption is reported to be growing at 3% per annum including consumption in the large producer countries of China and India at probably even a higher rate. The annual retail value of the global tea industry is currently estimated at around $ 70 billion.

"Therefore, with the correct policies, Sri Lanka with our established strengths has a great opportunity. In our view, why shouldn’t a $ 5 billion export earnings target per annum be a reality in the medium term? Optimistic, but not impossible," emphasised Perera.

Tea exports in 2018 including re-exports with imported tea was 282.36 million kilos, the lowest for many years. The total Rupee value of exports however at Rs. 231.75 billion is the highest barring the all-time high of 2017.

Perera said the encouraging feature is that the average FOB Rupee value per kilo is the highest ever at Rs. 820.75. "These Rupee details however must take into account the sharp decline in the value of the Rupee against the USD in particular," he noted.

Total export earnings in 2018 expressed in USD amounted to approximately $ 1.43 billion at an FOB price per kilo of $ 5.05 compared with $ 1.53 billion and $ 5.30 per kilo respectively in 2017. The highest ever Sri Lanka export earning was recorded in 2014 at $ 1.63 billion. "We must, at this point, stress that multiple strategies should be adopted to increase the value of tea exports from Sri Lanka, both quantitatively as well as qualitatively through bold and innovative policies," Perera pointed out.

The Chairman's Review in Ceylon Tea Brokers Plc also provides useful insights to the performance and challenges of the tea industry as well as the Company's performance and plans for the future.

Following are some highlights: (Table 1)

The table reflects a disappointing performance in the Low Grown category which accounts for over 60% of the national production. This is the lowest recorded Low Grown crop for the last six years barring 2016. High and Mid Growns fared better compared to 2016 and 2017, but way below their potential, which in our view should be over 75 million kilos and 50 million kilos respectively. Overall, we are way short of the all-time high of 340 million kilos achieved in 2013.

At the time of compiling this report, crop figures for the period January to April 2019 amounts to 97 million kilos, a 5.3 million kilos decline on the corresponding performance in 2018. Taking a cautiously optimistic view for the rest of 2019, it may be possible to catch up this shortfall and given suitable weather conditions together with the necessary inputs such as fertiliser, weedicides, etc. achieve a modest increase on the 2018 crop.

It must however be stressed that with almost 200,000 ha of cultivated tea in our country, a forward plan in excess of 350 million kilos in the near term and up to 400 million kilos in the medium term should be the national objective. For this purpose, a sustained replanting program coupled with the necessary inputs becomes a prerequisite. We are encouraged that the Sri Lanka Tea Board is of the same view and we trust that the necessary incentives to achieve this objective will be provided.

In spite of the drop in total production in 2018 compared with 2017, it is indeed disappointing that the Colombo Auction averages of all three elevations and consequently the total average have recorded a sharp decline on the corresponding figures in 2017 and even a steeper drop against the USD equivalent figure following the sharp depreciation of the Sri Lankan Rupee. ( Table 2)

Admittedly, 2017 achieved all-time high prices given the strong global market for tea. However, following the sharp decline in the value of the Rupee against the major currencies coupled with the lower production figure, a higher Rupee average would have been the expectation. Unfortunately, Colombo Auction averages so far in 2019 continues to be lower than the previous year and substantially below the all-time highs of 2017. This is indeed a concern particularly for the producer sector when viewed against increasing costs of production.

This in turn has resulted in most producers, i.e. Regional Plantation Companies as well as the proprietary estates/factory owners quite often recording negative returns and consequently greater indebtedness which is not a sustainable model. The possible answer is improved productivity coupled of course with a better quality product which would always command premium prices at the Auctions. There is never a surfeit of good quality teas.

In spite of the challenges facing the Sri Lankan tea industry in particular and the global economy in general, our company has achieved the best-ever results in our comparatively short history as a Public Listed Company. The specific details which reflect this position and would be of interest to the shareholders are set out below: (Table 5)

I commend the Management Team for this record-breaking performance particularly in a difficult year. The continued improvement in market share is reflective of the efficient service levels of our comparatively young team. The challenge ahead is for us to maintain and further improve on our stature as a well-established tea broking entity operating at the Colombo Tea Auctions, which is still recognised as one of the most vibrant auction centres for tea globally, recording higher average prices compared to other centres.

I am confident that the company will achieve this objective through professionalism and quality service expected of a tea broker.

Ceylon Tea Brokers' warehousing project which is a BOI approved entity is in the last stage of its construction and expected to commence commercial operations in June 2019. This state-of-the art warehousing complex which consists of over 12,000 pallet locations will function under Logicare Ltd., as a fully owned subsidiary of Ceylon Tea Brokers PLC.

Approximate capital investment on the project is around Rs. 950 million and part of it was raised through the Rights Issue conducted last year and the balance with a long-term financial facility from Hatton National Bank PLC at a competitive rate. The initial estimated cost increased due to the depreciation of the Sri Lankan Rupee against the US Dollar during the year under review, since the majority of the project expenses comprised of imported items. Further cost escalation occurred due to the introduction of two mezzanine floors enabling additional warehousing space. This additional space would create more revenue to the Company and we are confident that this facility would achieve its desired financial returns.

Logicare Ltd. would cater to the warehousing requirements of Ceylon Tea Brokers’ producer clients, which would add value to our customers at both ends of the value chain. Further, Logicare Ltd. will operate as a total supply chain solutions provider specialising in logistics, transport and other supply chain related services to external clients which will significantly contribute to the revenue portfolio of this entity in the future.

Last year has been a year of consolidation and growth for the company. In this scenario, we not only retained the loyalty of the many clients who were with us over the years, but added new manufacturing marks enthused with the professionalism and the dynamism demonstrated by our comparatively young team. This momentum we earned as we garnered the respect of industry players who were appreciative of our efforts to align the day to day application of the corporate governance process both in spirit and what was mandated and desirable.

Our manufacturing and advisory services are sought out by our clients with whom we maintain a regular open channel regards market demand and sound management practices. This has been a reciprocal learning platform creating improvements as we move into the future. We have expanded market share and have built a base with growth potential in the coming years. We have now strengthened the team with the promotion of three Senior Executives to the Board of Directors. We also focused on board balance and were fortunate to obtain the services of an industry veteran with broad exposure to business in general.

Following the tradition of previous years, let me leave you with our corporate theme for 2019 which we shared with our management at the beginning of the year: “Success must not breed complacency.”