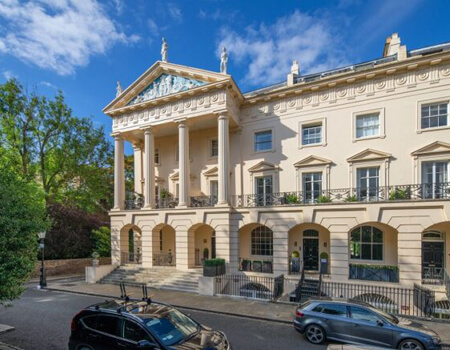 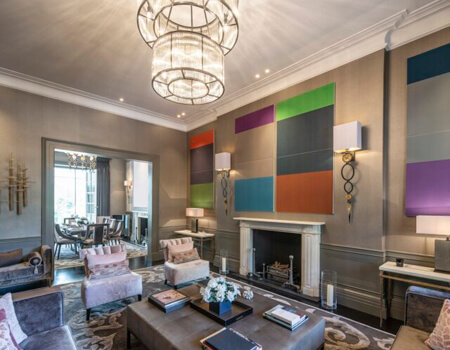 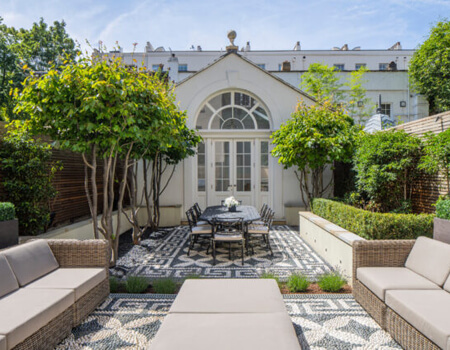 Beauchamp Estates are selling the former London home of Rothschild tycoon Baron Solomon Benedict de Worms, the founder of the Rothschild Tea Estate in Ceylon and “father of British tea”; consisting of a magnificent five bedroom Grade I listed 6,469 sqft Nash house on Hanover Terrace in Regent’s Park which benefits from a west facing rear garden and separate “tea house” where the Rothschilds took afternoon tea.

Designed by neoclassical architect John Nash, the white-stucco house was built in 1822-23 by John Mackell Aitkins as part of a Palladian terrace of 20 grand houses, named after the Viceroy of Hanover, designed by the Crown Estate for the family and friends of HRH The Prince Regent. The property is one of the largest houses in what is acknowledged as the finest of the Nash Regency terraces, and has recently undergone a beautiful and comprehensive restoration and detailed refurbishment and modernisation.

At the end of the large private garden, there is a “tea house”, created by the Rothschild tea dynasty; a mews which provides a sitting room, kitchen/breakfast room and garaging on the lower level and on the upper level two bedrooms and bathroom.

The house has a colourful history as the home of one of the “founding fathers” of the much loved British cup of tea. The first owner of the house between 1825 to 1828 was Major-General Ogg, a military serviceman and director of the East India Company.

Upon Ogg’s death in 1828 the house was purchased by tea tycoon Baron Solomon Benedict de Worms (1801-1882), a member of the Rothschild banking dynasty whose grandfather was Mayer Amschel Rothschild.

Frankfurt born and London based Solomon married on the 11th July 1827 heiress Henrietta Samuel, the daughter of banker Samuel Moses Samuel, with the house on Hanover Terrace serving as the couple’s new marital home. The couple had four children, George (born in 1829), Anthony (b1830), Ellen (b1836) and Henry (b1840).

Solomon and his brothers Maurice and Gabriel made their fortune by setting up in 1841 the Rothschild Tea Estate, a vast 2,000 acre tea plantation in Ceylon (now Sri Lanka). Tea plants had been brought to Ceylon by the British from China in 1824 and over the following decades tea production in Ceylon increased dramatically so that by 1899 the area under cultivation exceeded 400,000 acres.

Between 1840 and 1865 Solomon spent time in Ceylon building up the family’s tea plantations and factories, which made the family extremely wealthy. Solomon and his brothers cleverly marketed tea in Britain as a healthy beverage for the aristocracy and the upwardly mobile middle-class.

During the Victorian era tea became Britain’s staple hot beverage drunk for breakfast, lunch and afternoon tea. Queen Victoria adored a Twinings cup of tea (it remains the Royal Warrant holder) and where the Monarch led the nation followed with tea shops opening across London operated by firms including Twinings and Liptons. By 1884 London had become the global centre of the international tea trade.

Perhaps not surprisingly, given the origins of their wealth, Solomon and his wife Henrietta created a special “tea house” in the garden of their home at Hanover Terrace, the mews property having a main tea/lounge room with a dramatic vaulted roof, opening onto a terrace and the garden. The “tea house” enabled the family to take afternoon tea either indoors or outdoors depending on the weather.

In 1871 Solomon was created 1st Baron de Worms by Emperor Franz Joseph I of Austria, for services to industry, and in 1874 the tea loving Queen Victoria gave him special dispensation to use his Austrian title in Britain where it was recognised at Court.

Solomon died in 1882 aged 81 and he and his brothers were succeeded in the tea business by Solomon’s son Henry, who became the 1st Baron Pirbright.

In 1901 the house was purchased by Marianna Floretta Raphael, an artist, who transformed the Rothschild’s “tea house” into an artist’s studio where she exhibited her oil paintings and sketches. The Raphael family owned the Hanover Terrace house for over a decade and it has remained in private hands, owned by several different families, ever since.

Fast forward to today and the Hanover Terrace house has been completely refurbished and modernised since the Rothschild and Raphael family’s time in the property although the Rothschild’s “tea house” still remains at the end of the garden, providing a perfect venue for informal entertaining, especially during warm weather.

The grand first floor drawing room interconnects with the library, creating a large formal entertaining space that spans the entire depth of the house, with French windows opening onto front and rear balconies, offering elevated views over the front and rear facades.

The master bedroom suite occupies its own private floor on the second level of the house and features a large bedroom, walk-in dressing room and master bathroom. The 8-10 seat dining room and sitting room on the ground floor lead into the adjoining kitchen and breakfast room which opens onto balcony leading down to the garden.