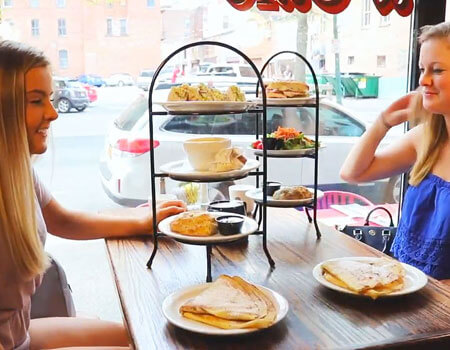 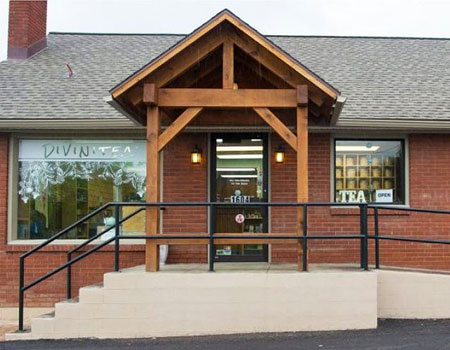 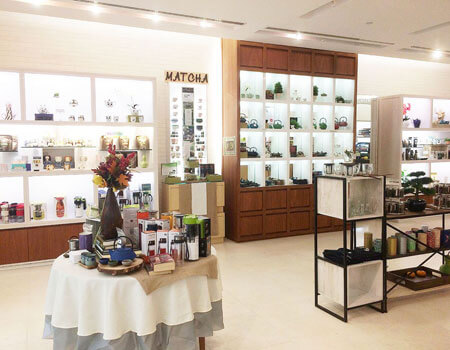 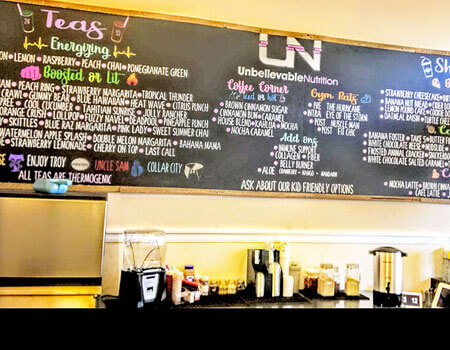 Tea has had an impact on the human condition for more than 5,000 years. From the court of Chinse Emperor Shen Nung in 2732 B.C. to that of Queen Elizabeth II today, the ritual and romance of tea have endured around the globe.

Portuguese and Dutch traders first imported tea into Europe from Asia in 1610. It came to North America with Dutch and English settlers in the early years of European colonization here, and it has been a staple ever since. Tea aficionados, retailers, tea room operators, online vendors, and the like, still attuned to Shen Nung’s sensibilities, enjoy it from formal afternoon teas to casual tastings to communal events to their morning beverage.

Like anything else, the tea scene has evolved, with its purveyors catering to modern preferences in décor and accompanying foods. However, for those with a nostalgic bent and a liking for British traditional periods -– thanks to the likes of “Downtown Abbey,” “Sanditon,” and “The Crown” -- it still is possible to find some more traditional venues that keep an old flame flickering.

Here, then, are eight of the better purveyors of teas with a cumulative 11 locations throughout the Greater Capital Region. (Because the term “tea house” in relation to Asian restaurants does not have much to do with varietal teas, we’ve excluded them.)

Now in year 16, the WK was founded in Ballston Spa in 2004 by New York City expatriates Kevin and Meaghan Borowsky as what they referred to as “a testing ground for this new concept.” Rather than the quaint classical teashop look, they went modern in design, and their menu offerings immediately went beyond petit fours and tea biscuits to include panini, scones, crepes, salads, club sandwiches, coffee, craft beers and specialty cocktails. The concept met with such positive consumer reaction they were able to add a Troy location in 2014 and a Schenectady location last year. And, their online sales division handles more than 150 teas. Self-service sections allow customers to browse various loose and other teas and accessories, read information on teas for health and pleasure, and make purchases in a variety of sizes. The $16 three-tiered Afternoon Tea is popular, including a quiche, sandwich, and premium salad, or a quiche plus a cup of soup or house salad, and a scone with cream and preserves or tea bread.

Owner Linda Smith has for decades been a ubiquitous presence at markets, fundraisers, social events, tea tastings and the like throughout the region and New York City, sharing her beautiful silver tea services while spreading the gospel of tea. This venue, located just south of the Hewitt’s Garden Center, claims to have the largest selection of USDA-certified organic teas in the nation, offering hundreds of custom-blended wholesale organic teas and organic herbal blends. No shrinking violet, Smith proclaims her operation “The best organic wholesale tea company in the United States!” Every Saturday from 10 a.m. to noon the retail store offers a free organic tea tasting.

Short and Stout was founded in 2011 by Joyce and Matt Zacharewicz as an online business enhanced by vendor sales at local craft fairs. In October 2013, it evolved into a full-service tea shop, then added a matcha bar (matcha is a finely ground powder of specially-grown and processed green tea leaves) and retail storefront inside the sprawling Crossgates Mall in Guilderland. It offers more than 130 loose teas, as well as a variety of complimentary nibbles. They frequently host tea tastings and game nights at both locations. S&S specializes in fusion tea blends, “which we like to call the next generation of tea.” Their Tea Lounge offers comfortable seating to encourage customers to linger, and it offers a line of sweet and savory pastries. Some examples: chicken curry puff infused with masala spice, vegetarian spring roll with sweet-and-sour black tea sauce, turkey-and-provolone or ham-and-Swiss croissant sandwiches, tea-infused shortbread and scones, oolong-infused brownie, and traditional French macarons.

This year-old, first-time business venture from Amanda Ziter features numerous teas as well as protein shakes by the Thermogenic brand. Its products feature such flavors as pineapple punch, strawberry margarita, cinnamon bun smoothie, and banana nut bread. They are made from plant-based protein, and contain very low amounts of sugars and carbs. Ziter also offers customized tea flavors inspired by the city of Troy with such names as The Flying Horse (the high school’s sports nickname), Enjoy Troy (a local promotional motto), Uncle Sam (the iconic figure based on a local 19th Century businessman), and the Collar City (referring to Troy’s dominance as a collars and cuffs manufacturing center in the days those things were detachable). 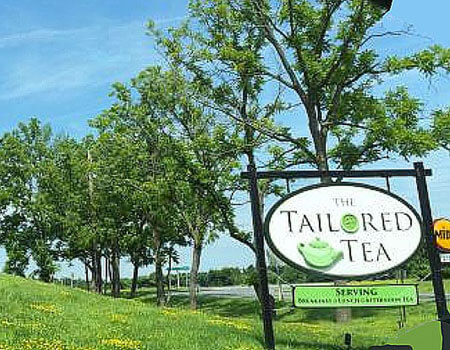 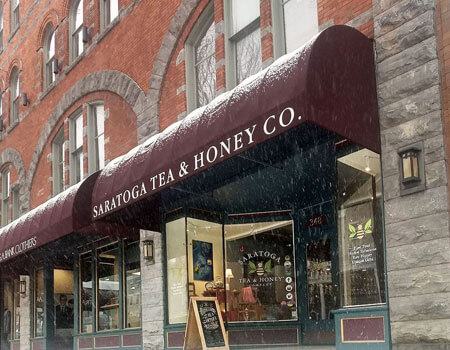 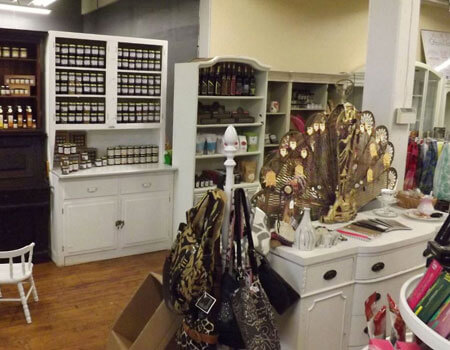 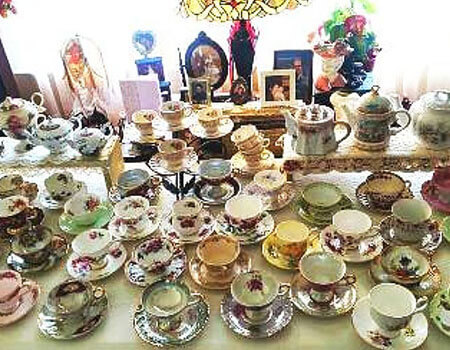 Annie Misir opened this bakery/café in March 2012 in the old Ebeneezer Hills farmhouse, built in 1806. The building was moved to its current location spot to make room for a project at the neighboring Albany International Airport, and was restored by the airport. The 40-seat cafe – there’s a pair of 25-seat private rooms on the second floor -- serves brunch, lunch, and afternoon tea, offering a menu served on Misir’s collection of vintage and antique china and linens. Her tea menu ranges from such standards as Earl Grey, English Breakfast, Irish Breakfast, and Indian Nilgiri to pomegranate white, raspberry apple tisane, and very berry. A very traditional spot.

This is a great spot for hunting down teas and honeys with wildly divergent properties, from gentle florals to ghost-pepper infused to those long known for medicinal properties and are featured as part of the monthly Wellness Collection tastings. The crew also offers lessons on brewing techniques, a honey and tea tasting bar, and sells a line of pottery style teapots from around the world. You can find some of the more modern tea styles, but you also can find some on the other end of the spectrum – such as a matcha wakatake from Uji, Japan, where it is hand-picked and stone ground by a family-owned business that has been producing matcha green tea for eight generations.

This establishment is housed in The Shirt Factory, a former manufacturing facility that has been converted to multi-use commercial space. It claims more than 500 teas in stock, with a regular selection of more than 140 types, from loose-leaf to seasonal varieties. It also sells New York-made accessories. Its commitment to recycling is evident in a Facebook notice saying, “Help us be a little more green this year. Instead of weighing your tea into a bag, bring in your jars, tins, etc., that you store your teas in at home. We'll measure the tea directly into your container and you'll get an extra 10% of your tea, no matter how much (or how little) tea you get!” Not a bad deal for very little effort.

Miss Lodema’s opened in 2015 as part of a gut restoration of The Roseboro Hotel, a historic venue whose former dining room is home to the tea room. The Roseboro, less than an hour’s drive west of Schenectady, was created in 1900 by linking what had been three separate hotels dating to the 1850s. The tea room is an homage to the style of the Roseboro’s heyday in the late 19th and early 20th centuries when visitors flocked to the tiny village to enjoy its mineral springs before such things went out of fashion. The tea room, where it is not unusual to see ladies wearing picture hats reminiscent of the fashions of older days, offers a variety of about 20 flavored teas for formal Afternoon Tea in an elegant setting. High Tea comes complete with a choice of two soups, scones with jam and clotted cream, a variety of tea sandwiches, rich desserts, and a wide selection of teas, coffee, or strawberry lemonade, all presented in a Victorian manner. The price is $25 inclusive of tax and gratuity. The venue also has a large selection of antique tea cups from which to choose to individualize one’s tea experience.